We have a duty of care to those under Australian jurisdiction to provide adequate mental health services -- and on Manus Island, that duty of care is not being met, writes Minto Felix. 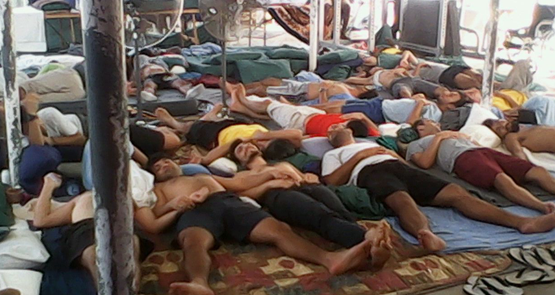 The events of the past few days on Manus Island lay bare a shocking reality. Not only concerning acts of alleged violence committed towards those seeking asylum, or what appears to be an increasingly inhumane immigration policy, but a crisis that has now reached a scale of endemic proportions.

It is unequivocally clear now that the mental health and wellbeing of these individuals is at the greatest level of concern that it has ever been since the re-introduction of the Manus Island detention centre.

This is not new information. Previous research conducted by International Health and Medical Services, the agency contracted by the government to provide medical services in detention centres, highlighted the high proportion of people with severe levels of post-traumatic stress disorder. It is also well documented that the number of asylum seekers with mental health conditions, and the severity of these conditions, increases exponentially the longer they are in detention.

However, what is different about the current state of affairs is the unacceptable duration of time many of these individuals now spend in detention, and in turn, the extreme consequences this is having on their mental state. The almost daily acts of self-harm, the prolonged period of anxiety caused by uncertainty over their futures, and the overall attitude of hopelessness are all effects of sustained trauma that will only worsen if appropriate support is not provided. The latest numbers show that a significant proportion of asylum seekers have been in detention for 18 months, which directly correlates with a more than 80% risk of developing some form of serious mental disorder. With such life-debilitating consequences attached to this form of trauma, the current state of affairs is simply no longer acceptable.

Compounding this adverse state of affairs is also the “‘treatment” that is available in these detention centers. This week alone, we have heard frequent examples of the over-prescription of anti-depressants, a strategy that is widely used in these centers but never spoken about; of isolating individuals in cells as the go-to measure in responding to their distress; and, of course, the dearth of medical professionals available to support the people housed in this environment. Such an approach would be considered barbaric in any other form of mental health setting under Australian jurisdiction, but in the asylum seeker context it appears that all that is known to be important about the provision of quality mental health care goes out the window.

But perhaps the most concerning aspect about all of this is the likelihood that such conditions could foster the emergence of the “contagion effect” — where individuals observe, absorb and then model the behavior and feelings of others. Given the highly volatile nature of detention environments and the close proximity in which individuals live and share struggles with each other, there is immense risk for crises to escalate beyond reason. And worse yet, for the wellbeing of an entire generation of people to be bruised and battered because of deeply individual traumas.

The government might have succeeded in stopping the boats, but it has the lives of thousands of vulnerable people on its hands — who are owed the fundamental duty of care to have their right for a life of good health upheld. This week has shown us so clearly that we have failed in this commitment, and it is time to undo the damage.

Minto, leaving aside the credibility of some alleged incidents, you are aware [I’d hope] inmates know how people will react when they see certain types of horrendous behaviour on the television, and [even more importantly] the self-reinforcing cycle of propaganda campaigns such as this?

Norman, you really take the biscuit for stupidity.
1. they are refugees who have fled Al Qaida, the Taliban, IS, the Sudanese war, Somalia, Palestine and Syria – they aren’t migrants who made some choice to move from a safe country to another safe country.
2. we kidnapped them from the ocean, trafficked them by force to another country, jailed and tortured them and expected them to just cop it.
3. they are not criminals, they have committed zero crimes but we have been deemed to be cruel, inhuman and lawless by every human rights body on the planet.

And the allegations have been filmed, why would you be such an arsehole.

And that’s why they’re not entitled to humane treatment. Damn right Norm.

MarilynJS, this is the sort of emotive ‘analysis’ we once received from an anonymous Shepherd. In an effort to try to help you as I helped her:
1.Assertions such as, “you really take the biscuit for stupidity” may help you feel better but they really don’t constitute a convincing argument for whatever it is you hold so dearly.
2.While some refugees [and for the sake of your ‘argument’ we’ll leave aside those who ‘fled’ for economic reasons] as you say, “may (emphasis added) have fled” from genuine persecution, but that’s no reason to duck serious analysis of points raised by other posters.
3.Please give more thought to your quaint ‘interpretation’ that Australia, “kidnapped them from the ocean, trafficked them by force to another country, jailed and tortured them and expected them to just cop it.” If, of course, you have any evidence of Australia’s heinous acts such as them being “tortured” by Australia, mount a campaign to have Australia dealt with by the appropriate International Court, and you’ll have my full support.
4.In the meantime, assertions about Australia’s actions being “deemed to be cruel, inhuman and lawless by every human rights body on the planet” do sound a tad like hollow trumpeting, don’t they.
Chris, why not please try to understand what others actually write?

I really cannot believe the country we have become. Or do not want to to be honest.