Did AirAsia flight QZ8501 crash because of bad weather? Pilot error? Damage to the jet? 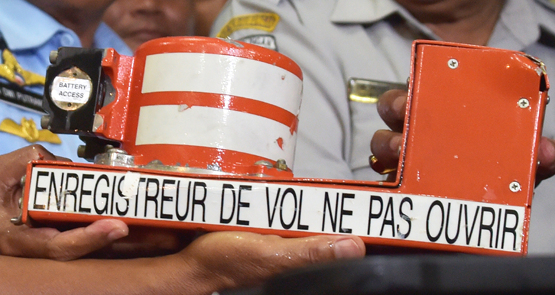 The cockpit voice recorder recovered from the QZ8501 crash site

Reports yesterday that the chairman of the National Transportation Safety Committee, Tatang Kurniadi, said the public would “not be exposed” to the preliminary report next week might not be correct. But even if they are, versions of what the report contains are almost certain to leak, given the wide range of parties to the investigation and the fact that well-connected reporters in Jakarta are, like their counterparts in Canberra or Washington DC, adept at getting leaks — with the risk that secondhand disclosures may also prove second best.

Almost two years ago, Indonesia produced a transparent, fearless and accurate preliminary report into the sea landing of a Lion Air 737 near Denpasar Airport, which surprised many observers, because the Indonesian low-cost giant was itself something of a national institution, and clearly did not benefit from the report’s style or contents.

So far the report card for the AirAsia QZ8501 investigation would have to be mixed. There have been moments of great clarity, blemished by one official declaring that it was evident that the A320 had exploded before hitting the Java Sea on December 28, while flying 162 people between Surabaya and Singapore.

Those comments were embarrassing and stupid, and quickly repudiated by the next official to possess the microphone at a major media briefing in Surabaya. Yesterday, claims were made in a parliamentary hearing in Jakarta that the jet had been briefly seen on radar climbing at 1800 metres a minute before stalling and then crashing.

The 1800 metres figure is “extreme” in its magnitude, but it might also be correct. At the time it was released, every serious student of crash investigations was left wondering what the flight data recorder actually said about the vertical speed of the jet, not as a radar trace, but as measured by the speed of the air at altitude over the wing.

It is reasonable to expect that this data, which the investigation team must surely by now possess, will tell us how soon the wing of the A320 was stalled, or more importantly, the data may well reveal whether the upward motion was caused by an extraordinary updraft that tore control of the jet from the hands of the pilots.

As several readers have already pointed out in the discussion in the earlier thread, the wind gusts and loading on the jet’s structure might have exceeded the design limitations used in certification testing on all modern jets.

There is an inherent assumption in the certification requirements of airliners that they will not be flown directly into major thunderstorms. Thus the question may be, why was this so in the case of flight QZ8501?

Not promptly releasing the interim report would be enormously frustrating for those victims’ relatives who are curious about what happened, and certainly a concern for any well-run safety-conscious airline that routinely flies through areas where such violent weather conditions are expected.

It is true that full analysis of the accident, and the huge amount of information that can be extracted from the data recorders, will take much longer than a week. But the preliminary report ought to contain important insights and they ought to be released without the risks of selective quotation or misinterpretation via unofficial channels.

Enhanced cleaning, lounge restrictions: what it all means for air travellers

Sacrifice the Virgin! Air travel should be nationalised and socialised