There's plenty to worry about when it comes to crash investigation in Australia's aviation industry -- not that you'd know it from the minister's interest in the subject. 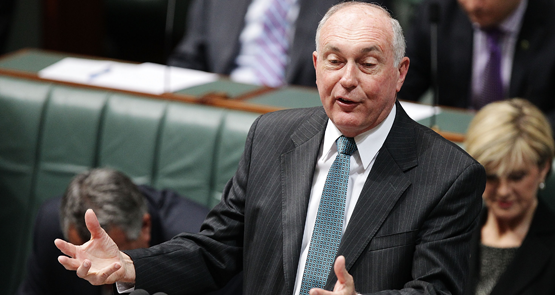 How long can Warren Truss, the deputy PM, leader of the Nationals, and minister responsible for reannouncing Labor highway projects as well as air safety, continue to neglect the aviation part of his portfolio?

Questions about the minister’s capacity to focus and act are made all the more pressing by the extraordinary generosity to political parties by Regional Express Airlines (REX), the owners of the disgraced Pel-Air operation that dropped an air ambulance into the sea near Norfolk Island in 2009. REX’s board include the former Nationals transport minister John Sharp, who is deputy chair of REX and chair of Pel-Air.

In 2012, Australia’s air safety investigator, the Australian Transport Safety Bureau, was in a state of internal turmoil over the direction of its final report in the Pel-Air crash. That turmoil is documented in the peer review of the ATSB’s report by the Transportation Safety Board of Canada, which led to Truss instructing the ATSB in December to reopen that  inquiry.

Consider what was happening in 2012 carefully.

At the end of August 2012 the ATSB produced its final crash report, which failed to mention dozens of  serious deficiencies in the Pel-Air’s Westwind corporate jet division, and overlooked its own failure — as the regulator — to oversee Pel-Air, including serious problems with the airline’s fatigue management and oceanic refueling practices.

However, documents the Australian Electoral Commission recently provided to Karen Casey, the nurse who was seriously injured in the Pel-Air ditching, show that  in the second half of 2012, REX donated $250,000 to Labor, $97,500 to the Nationals and $40,000 to the Liberals.

If REX knows the rationale behind the donations, it isn’t sharing it with the media.

The obvious deficiencies in the ATSB report led in turn to a damning all-party Senate committee inquiry, which, among other things, expressed a lack of confidence in the testimony provided to it by the chief commissioner of the ATSB, Martin Dolan.

Both the former Labor minister responsible for transport, Anthony Albanese, and the current missing-in-action minister, Warren Truss, treated the senators with total contempt, refusing to engage in any meaningful way with their concerns, and in the case of Truss, relying on an anodyne nothing-to-see-here response from his own department.

But after Truss ordered the reopening of the Pel-Air inquiry — something he had to do given the incisive criticism of the ATSB by the board’s Canadian counterparts — the ATSB defied him by continuing to display its discredited Pel-Air report on its website.

Worse than that, Truss appears to have drifted off into la-la land by allowing the ATSB to appoint one of its own, Dr Michael Walker, to lead the investigation into its own fiercely denied errors.

The perils of this shabby approach would be obvious to someone who is on the ball.

The minister has also failed to carry out his personal commitment to appoint an additional commissioner with technical aviation experience to the ATSB, or to act on the Senate’s findings against the conduct and integrity of its chief commissioner.

A vague minister and an embarrassing and deeply flawed air accident report. What could possibly go wrong for Australia’s reputation in air safety governance with a combination like this?

Enhanced cleaning, lounge restrictions: what it all means for air travellers

Sacrifice the Virgin! Air travel should be nationalised and socialised

Ben, as long as that’s one of the Coalition’s major concerns, I suspect they’ll be happy.