Rundle: Obama has no hope of achieving his agenda, so why is he smiling?

President Barack Obama was in his element at the annual State of the Union address, despite knowing that almost none of his legislative agenda will pass a recalcitrant Congress. 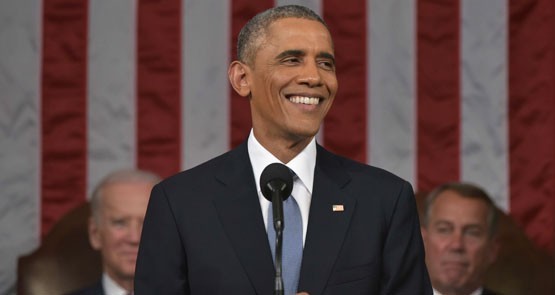 Barack Obama will be President of the United States for exactly two years more, yielding to Hillary Clinton or Rand Paul or hahaha Mitt Romney on January 21, 2017. The House of Representatives is more dominated by Republicans than any time since the rockin’ rollin’ Republican ’20s, the Senate is 55-45 going their way, and the Supreme Court has a reliable 5-4 split for a nutty conservative interpretation of the constitution. Under these circumstances, Obama had to give the State of the Union address and suggest a lot of things he doesn’t have a chance of getting through.

So why is this man smiling?

It’s precisely because Congress is now so hostile, officially. Right up to the midterms, Obama was bedevilled by right-wing Democrats — especially a few in the Senate — who had no intention of supporting a whole range of even mildly leftish proposals. So they couldn’t be presented. Those seats were lost anyway, and now it’s for a Republican Congress to reject.

So Obama began by asserting what he wouldn’t do, which is let through a whole range of laws the GOP want to push. Obama has said he’ll veto the Keystone pipeline, any changes to the healthcare laws, his relaxing of immigration prosecutions, and the  (meagre) controls on Wall Street. In that, he has increasingly used in his rhetoric the residual idea of the presidency contained in the constitution — that while Congress may be a representation of district interests, the president represents all of the country, making a collective decision. It’s a pushback against the Right’s anti-federalism that they’ve pushed for years — the idea that the presidency is somehow an illegitimate office.

The positive agenda in Obama’s speech is pretty comprehensive, and, as always in these matters, includes things achieved in Australia from the 1940s onwards: paid sick leave (!), tax credits for cheaper childcare, a raise in the federal minimum wage, reducing the interest rate on the ruinous tuition Americans have to pay for mostly useless degrees. He also wants to make the first two years of community college free of tuition fees. He further endorsed net neutrality (which is for the separate Federal Communications Commission to decide), and the closing of Gitmo, which only Congress can do.

A comprehensive program with no chance of getting up in any substantial form, though the Republicans may bend on childcare credits and tuition fees as part of a larger tax-reform package.

But of course that’s not the point. The point is to make the GOP the party of “no”, and to put pressure on fractures between their dwindling moderate centre, the official Right, the neocon/Tea Party right, and the isolationist paleo-con/Tea Party/Paulite Right. Measures such as the Gitmo move, the drive towards opening up Cuba, and increased support for the war against DAESH/ISIS/ISIL/Islamic State can do this a treat.

And that’s why Obama and the Democrats are smiling.

Obama and the Democrats are, paradoxically, in a much better position than they were in the last year or so when the Democrats had ostensible Senate control. The tilt of the economy is finally, genuinely, upwards, to a degree that people can start to feel on the ground. And the price of petrol is so low as to make an appreciable dent in cost of living.

None of this is strictly, or even largely, due to the President, or at least its timing isn’t. But the Republicans have spent six years blaming him the prelude, first for Dubya’s recession lasting into 2010, and then for the flatlining pseudo-recovery that resulted from insufficient demand stimulus (held back by a nervous Democrat-controlled Congress). By implication, he’s now responsible for the slow but palpable lift out of it.

Furthermore, whatever the result of the 2014 midterms, with a 38% turnout, the 2016 presidential race still favours the Democrats. Having converted Virginia and Colorado, New Mexico and Nevada into Democratic, rather than swing states, the Republicans now face a very difficult battle to get the White House. It’s not enough to win Ohio and Florida anymore. There’s also the 2016 Senate race, which is taking place largely on Republican turf, with five or six seats up for grabs, and no real dangers to the Democrats. By capturing some statehouse over the next four to six years, the Democrats believe they will be on track to regain control of the House by the early ‘20s. Their relative optimism comes from the belief that the White House and Senate lean their way, that some of these frickin’ right-wing Supremes have to pop off sooner or later, and that Republican domination of the House is largely a result of the gerrymander imposed by control of state legislatures.

Grist for the mill. The only question to ask is: could these things have been done in the first two years, when the Democrats had control of Congress? Would they have, if they thought they could have got them through? Or is this a piece of breathtaking political cynicism, a whole series of reforms held back to hit the Right with — and to make a fresh set of promises for the next Democratic candidate to take up and run with? The next two years will not merely be bloody, but bloody interesting.

When the clock strikes 12, US will bring down the world economy

Who says the Yanks don’t get irony?

Why does he think this will work? The “Party of No” was elected here …

Interesting analysis Guy. The mid term defeats of the Democrats and the loss of the Senate are really blessings in disguise?

Obama is probably smiling because he is thinking how well disguised these blessing are.

It’s funny how what are commonly perceived to be the biggest isues in the US – lack of affordable healthcare, inequality of educational opportunities, frighteningly low minimum wages and a general absence of rights for low-income workers – are all policies actively being pursued by the Coalition in Australia.

The tilt of the economy is finally, genuinely, upwards
Oh really? You don’t think it’s still rather sick considering that $1T was pumped into the US economy? But then how could QE improve the economy given that it all went into the pockets of the 1%.

I really had to laugh (at the time) when Abbott castigated Obama, and the Federal Reserve, for reducing QE, which caused a dramtic stock market blip, after slagging Labor off for having a most effective stimulus.