Labor is likely to do very well in the upcoming Queensland election, but probably not well enough to win government. But the real question is: will Queensland Premier Campbell Newman lose his own seat? 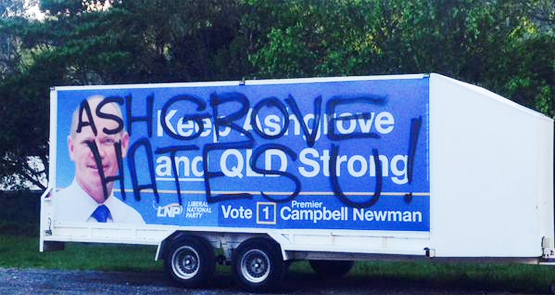 With nine days to go until the Queensland election, the campaign appears to be playing out as a prudent observer might have expected, with the Liberal National Party headed for a bloody nose, Labor working off too low a base to be a credible chance of victory, and Campbell Newman’s fate in Ashgrove remaining the million-dollar question.

Lighting the way over the past week have been three opinion polls — one from ReachTEL encompassing the entire state, one from Galaxy targeting eight electorates that could best be described as “competitive” (“marginal” having lost its meaning in the present context), and an Ashgrove poll courtesy of Newspoll.

The first of these is hot off the presses, having been conducted for the Seven Network on Tuesday evening, and it’s consistent with the established impression that the LNP has pulled clear of Labor, without having even the slightest chance of matching its extraordinary result from 2012.

To those who have been paying attention, this should not come as a surprise. Whatever the intended message of Labor’s weak and directionless campaign, the point it is communicating most effectively is that the party remains unready to govern.

Indeed, most of the blows landed on the government have come from elsewhere, the most visible example being the fit of pique played out on a daily basis by Alan Jones in his surreal short-term slot on Brisbane talk radio station 4BC.

As a factor in the electoral equation, this needs to be kept in perspective. Even in his power base of Sydney, Jones’s influence on swinging voters is apt to be overstated. In Queensland, the spectacle of an out-of-town right-wing shock jock pursuing an environmentalist cause as part of an all-too-obviously personal vendetta is mostly causing befuddlement.

Far more troubling for Newman are the interventions of Chris Davis, the respected former assistant health minister, who quit parliament last year and is now starring in his own ads advocating that voters put his former party last; and Ian Leavers, president of the Queensland Police Union, who has echoed Alan Jones in saying Newman “looked me in the eye and lied to me” on promised extra funding.

There is little doubt that the government has put enough constituencies offside to ensure that a good many MPs will be looking for work in a fortnight’s time. But with Queensland’s electoral complexity ensuring that the swing will be uneven, it’s a lot harder to say which particular members will stand or fall.

The best insight into the geographic spread of the swing has been the aforementioned Galaxy Research poll in The Courier-Mail on Saturday, which targeted two seats in Brisbane together with the six that dominate Townsville and Cairns.

The data  was particularly welcome in the latter case, as the results in these electorates hinge on the unpredictable factor of how those who voted for Katter’s Australian Party in 2012 behave this time around. The KAP polled about a quarter of the vote in Townsville and two-fifths in Cairns, but has now vacated the field to concentrate its energies on rural electorates.

The Galaxy poll suggests the slack has been taken up entirely by Labor, whose primary vote is recorded as shooting up from the high-20s to the mid-40s. This leaves Labor looking competitive or better in all six seats, of which it presently holds one.

In Brisbane, the minor-party vote was a great deal lower in 2012, presenting Labor with the seemingly tougher task of poaching votes directly from the LNP. Galaxy nonetheless suggests that fully 10% of voters in the electorates of Greenslopes and Pumicestone have indeed made the switch, producing two-party swings very much like those in Cairns and Townsville.

However, a sample of two seats is ultimately of limited use in reading the temperature of Brisbane’s 42 electorates, which have been known to exhibit regional variations of their own — notably in 2009, when displeasure at the merger of the Mater and Royal Children’s hospitals provoked a northern-suburban backlash against the Bligh government.

To gauge the spread of the parties’ strength in the capital, it may be more illuminating to observe the federal election of 18 months ago than the state election of three years ago — which you can do in detail on my blog The Poll Bludger, where you will find federal election margins transposed on to the state boundaries.

Comparing state and federal results suggests Labor’s greatest area of underachievement in 2012 was Ipswich, which happened to be the site of Opposition Leader Annastacia Palaszczuk’s campaign launch on Tuesday.

Another hotspot where voters proved less hostile to Kevin Rudd than they were to Anna Bligh was a strongly multicultural area in Brisbane’s south that encompasses the seats of Sunnybank, Stretton and Algester, each of which now sits on an LNP margin of around 10% — right in line with the swing being projected by statewide polling.

It may have been for this reason that Campbell Newman delivered his campaign launch speech on Sunday against a multi-ethnic backdrop of nodding heads, in remarkable contrast to the all-white cast of the the Liberal Party’s federal election ads.

As for Newman himself, the third of the polls to emerge in the past week, from Newspoll in The Weekend Australian, found him continuing to trail his Labor opponent for the seat of Ashgrove, Kate Jones.

However, the Labor lead was well inside the margin of error — and in Ashgrove as elsewhere, momentum very much appears to be going his way.

Poll Bludger: will Newman pull a Kennett on Saturday?

It might mean a lot of fervent ‘progressives’ have to settle for one silver lining in a rainy cloud-filled political sky.

@Norman – why is that? Labor were never going to win Qld, and if they did it would be via some unmanageable coalition with minor party crazies. By winning the Qld election the LNP virtually guarantees that a far greater swag of Coalition seats are lost to Labor in the next Federal election – even more so in the event Newman holds onto Ashgrove and remains Premier.

The Coalition have very little to look forward to regardless of how the election goes, so sit back, relax and enjoy.

Despite the LNP seeming like an unflushable turd, Labour and tbe Greens have been particularly lackluster in their campaigning in Qld to date. It can’t have come as that big a surprise to the parties that Newman would try to pull a swifty and call a snap new year election. Being dodgy has seemed to be his raison d’être.

A potential beneficiary of being lazy/inept in the face of the snap election may be the Rise Up Australia Party. In many electorates there have been only 4 choices: Lab, Lib, Green and “independent”. Many progressive friends put “Independent” 2nd after the Greens, not realising that many “independents” in SE Qld are from Rise Up Oz who were too disorganized to even register their party in time. At least they are honest about being small minded bigots instead of resorting to dog whistle politics I guess…

And about the senate… oh yeah, still in Qld…

And regressives will be orgasmic.

Newman – “Psst, don’t mention our 4 pillar economy, we mentioned it once and I think we got away with it.” Previously, the LNP sought to be judged by their achievements within construction, tourism, infrastructure, and mining. They got none from 4, and don’t bother mentioning this plan any more. Mining is their last chance. The LNP’s eagerness to offer hundreds of millions of taxpayers money to the last player standing in the Gallilee Basin, world giant Adani, is at odds with an alleged debt riddled budget. Hmm, must be time for a new plan. Now, they trot out their 30 (!) year plan, and have no credibilty from 2.5 years of failure. What a farce, Ashgrove, do us a favour and vote Newman out. QLD, please follow Ashgrove’s lead.