The Sun is making its nubile young ladies cover up! Or is it...? Plus more media tidbits of the day.

Boss reading over your shoulder? Probably best to read this on your phone then. Not-safe-for-work photos follow …

An issue of trust. Poor Campbell Newman. It’s not just Alan Jones calling him a liar these days. Here’s an ad from page 17 of today’s Courier-Mail, taken out by no less than Newman’s former health minister Dr Chris Davis. Davis resigned from the government in May after objecting on a bill to significantly raise the threshold at which political donations had to be declared to the electoral commission … 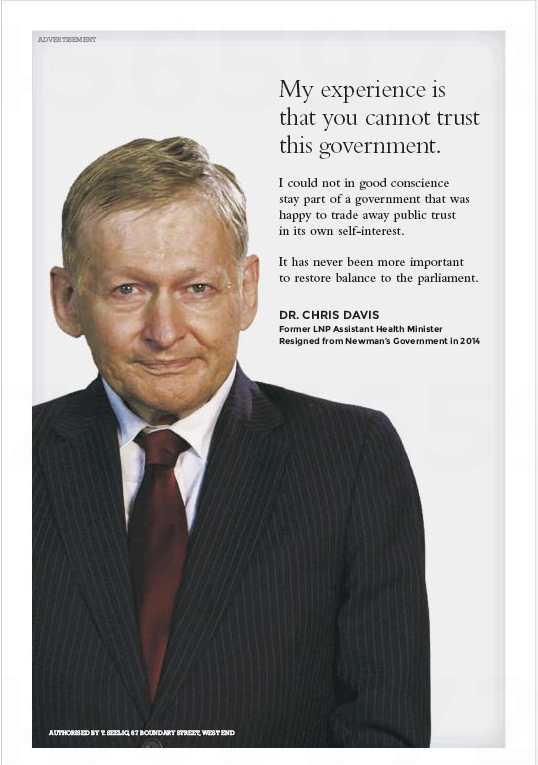 Peeping Toms. Southern Cross Television has been found to have breached the commercial television code of practice through the airing of a Today Tonight segment in Tasmania that intruded on the privacy of a couple by filming through a window into their home. The broadcast, about a disputed house sale, named the suburb and street of the house, and further footage showed signatures on a contract relating to the property.

The Australian Communications and Media Authority ruled that there was “no identifiable public interest reason for broadcasting the material”, and that “consent was not obtained”. “The privacy requirements of the code are there to protect people’s personal information where there is no clear public interest in disclosure,” ACMA chairman Chris Chapman said in a statement.

There was a second complaint about identifying children in a broadcast, but ACMA didn’t find a breach on that basis. There was also ruled to be no breach regarding accuracy or in the fair representation of viewpoints.

Southern Cross hasn’t disputed the decision. It’s agreed to provide a copy of it to senior news and current affairs staff, and to include it in future training sessions. — Myriam Robin

Page 3 lives! Maybe? Today’s page 3 in The Sun. Make of that what you will. 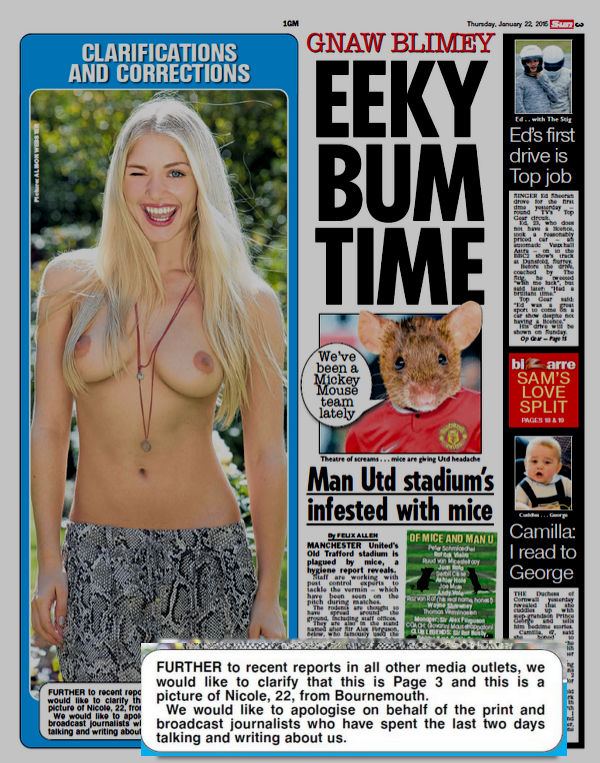 Mind you, at least this whole thing has given everyone a chance to take a leaf from the Sun’s book for a few days. You’ll notice Crikey has faithfully reproduced today’s page 3 above. We have, however, been upstaged by The Age, which today looks like this … 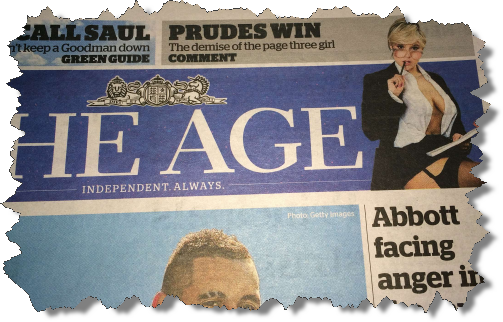 With only some 225,000 people who do pay to access the paywall — out of daily sales of 1.9 million — questions are being asked if putting pics of the page 3 half-naked female inside the paywall would drive more (presumably males) readers to subscribe. After all, half-naked women no longer set the internet on fire, given the amount of content showing fully naked women, men and others indulging in all sorts of behaviour. People even post pics of themselves (nude selfies) online for nothing. How can the Murdochs and their prized UK newspaper compete with that?

There’s a suggestion that there’s a solid financial reason behind the decision. Like the Australian newspaper cousins, Murdoch’s UK papers are in need of advertisers, revenues are falling, while print sales are also dropping. And the advertisers spending a lot of money at the moment sell to young people, especially young women and young families, where the mothers are major decision-makers, and not to middle-aged men drinking beer, watching football on Sky and having a punt and a leer at page 3.

Late last year, figures released in London showed The Sun’s finances are worsening, with pre-tax losses of 124 million pounds (around A$230 million at current exchange rates) during the past two financial years, reflecting 190 million pounds (around A$350 million) of legal costs related to phone-hacking. Turnover fell by nearly 30 million pounds (around A$55 million) in the year ending June, 2014, because of the decline in print advertising and sales. The Guardian reckons dropping the page 3 topless woman will make The Sun and the 1.9 million copies a day attractive to advertisers who have resisted the key Murdoch title — such as Apple, big UK retailer John Lewis and upmarket supermarket chain Waitrose.

But that recalls the probably apocryphal line from decades ago from New York, where Rupert Murdoch was pitching the attractions of his New York Post to potential advertisers. It has been claimed that one advertiser told Murdoch in reply that “your readers [of the Post] are our shoplifters”. — Glenn Dyer

Not so dinky di. Today, in the Terrible Dinkus awards, we have a new winner. The Guardian seems to be the last paper to continue the full body shot “dinkus” (i.e. the author’s bio photo) which was all the rage in the rockin’ zeroes. Some of them are shockers, the prize previously going to a certain friend of Crikey‘s, a lithe and graceful man whose shot makes him look like Lurch out of The Addams Family. But here’s a new one: Matthew D’Ancona, The Guardian‘s new house right-winger. 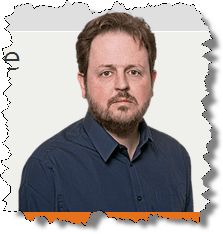 He’s right to look miserable: people usually last as long in that slot as a subaltern on the Western front, 1915. We also note that he has grown a very Guardianish beard, since his last job, editing the Spectator, and is wearing Guardian team colours, like a bank teller. Cheer up, mate. You’re in journalism. At least you’ve got a job. For the moment. — Crikey contributor

Apocalypse Slough. US TV network NBC has signed to air a 10-part series from Sky 1, owned by UK satellite TV group Sky (controlled by the Murdoch clan), called Apocalypse Slough. NBC Universal International TV Distribution is handling international sales. It also handles Downton Abbey, so there’s a chance for the Seven Network to slip in there and grab what sounds like an original idea.

US actor Rob Lowe has signed to star in the series. He will play a minister of the cloth, which makes for a change from Parks & Recreation and The West Wing. As well, Sky says Jenna Fischer, Megan Mullally, Mathew Baynton (Yonderland), Pauline Quirke (Broadchurch), Paterson Joseph (Babylon, Peep Show) and Joel Fry (Game Of Thrones) have all joined what is being termed a bold comedy drama. It is due to screen in the UK later this year. It will be directed by Emmy-nominated Michael Engler (30 Rock) and is created and written by Iain Hollands (Beaver Falls).

According to this report:

“The series follows an eclectic group of ordinary people in an extraordinary situation: a collision is imminent with an eight-mile wide comet that’s destined to wipe out all life on Earth. Together, they hunker beneath the town of Slough, about 20 miles west of London, to watch the end of the world on TV.”

Discovery makes a strike on soccer broadcast rights. Is this a game changer in the increasingly complicated bidding tussle for control of the weak Ten Network? Discovery, the putative partner of Foxtel in its 23-cents-a-share spurned offer, now seems to be switching its attention to a real deal — the English Premier League (EPL) TV rights, which will be awarded this year. Bloomberg and other outlets are reporting that Discovery CEO David Zaslav travelled to London on Wednesday to meet Premier League officials. If Discovery is interested, it would go up against the two main contenders, BT and Sky, in the auction for the EPL’s broadcasting rights.

UK analysts reckon the rights to the EPL, the richest in Europe, will go for around 4 billion pounds (over A$7.3 billion) for three years starting from the 2016-17 season. That would be up 30% or more from the current cost. First-round bids for the UK broadcast rights are due on February 6. A total of seven program packages of matches are at stake; Sky currently holds five packages and BT two. Both SKY and BT have said they will bid in the auction.

Interestingly, Virgin Media – which is controlled by the same John Malone-owned company, Liberty Global, that controls Discovery — is playing a spoiling game in the EPL rights auction. Virgin has called on communications regulator Ofcom to intervene in the EPL auction process, claiming the current arrangements will lead to British consumers paying more to watch fewer games. Ofcom is due to rule on the complaint in March. A win by Discovery would probably see Virgin lose interest in its complaint. – Glenn Dyer

Video of the day. Aussie funnyman Dan Ilic has a new job as senior satire producer at Al Jazeera English. Here he is on that Fox News call to arms. 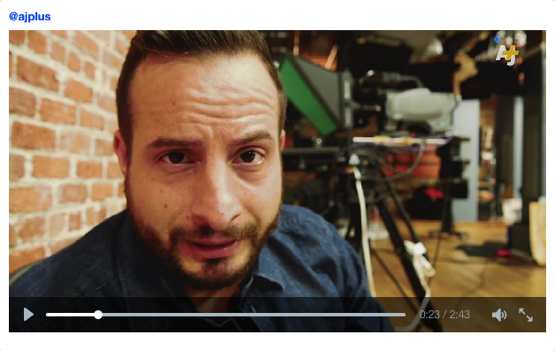 Correction please, Crikey. Chris Davis was NOT the Newman Government’s Health Minister. That person was and still remains Lawrence Springborg. You need to add the word “Assistant” in there please.

It’s always had me puzzled why a seeming astute businessman in Murdoch would alienate a large percent of his potential readership. Well here is my take…. Let say 30% are rusted-on libs, 30% rusted-on labor, that leaves 40%. Of that 40% half would be swinging voters and half would have very little interest in politics. Now the 30% labor and the 20% thinking voters would not buy a Murdoch paper because of the bias. That is half the potential readership. I know a lot of people who think the sports section, and perhaps the page 3 pics are well done. Let’s say that 15% of the people that buy a Murdoch paper have no interest in politics but are interested in sport and page 3 pics, they would glance at the political headlines, and when it comes to election time would vote lib not necessarily knowing the full details. Murdoch’s gift – being a paid up member of the liberal party. His real money is made elsewhere.

I’m a big fan of Dan Ilic’s work from The Hungry Beast and Barnacle Bill’s Semi-Factual Nautical Tales among others things. Not expecting to see any skits on World Cup hosting bids though…

To paraphrase Ava Gardner’s apocryphal remark about the film of Nevile Shute’s dystopian ‘On the Beach’, Slough is the perfect place to watch the end of the world.
Re the Page 3 pic, at least the model’s breasts seem natural but what was the AGE thinking, if at all?

The Ilic video has been removed – wonder why.