A public transport lobby group claims commuters could save $10,000 a year by ditching the car and using transport. That isn't quite true, but it would save cash. So why do people drive? 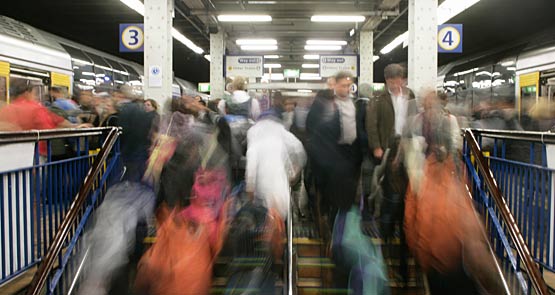 The Australasian Railways Association (ARA) released its annual report this week, claiming that commuters could save big money if they use public transport instead of driving (media reports here and here).

The report, The Cost of Commuting, says the average potential saving for capital city commuters could be $1725 a year if they left their vehicle at home and travelled to work on the train, bus or tram instead, or $9974 if they went without a vehicle entirely and relied solely on public transport. (How the ARA arrived at many of its specific numbers isn’t clear from the report.)

These are substantial savings; it seems commuters must be insane if they drive to work. Yet, averaged across Australia’s capital cities, 75% of workers insist on getting to work by private vehicle.

Even in Sydney, where public transport has by far the highest mode share for the journey to work, 67% of workers commute by car.

Part of the explanation is that the ARA has been imaginative with the facts, and it’s seriously exaggerated the cost of driving to work. Sadly, I don’t find that surprising; after all, it’s a lobby group, and in today’s public discourse it seems pretty much anything goes.

One way it’s been especially creative is to overstate the costs of driving, by assigning all the standing costs of owning a car — things like depreciation and registration — to commuting.

That greatly helps the ARA’s agenda because fixed costs are usually much higher than operating costs. But it’s misleading, because commuting only accounts for a minority of trips. In Sydney, for example, commuting accounts, on average, for 26% of all kilometres travelled on a weekday. The ARA should’ve assigned three-quarters of standing costs to non-work purposes, like social and recreational travel.

That makes a big difference in terms of the relative cost of the two modes for commuting but even so, the most important explanation for the popularity of driving to work is straightforward: it offers substantial and tangible benefits relative to what the available public transport offering provides.

Commuters know they could save a lot of money if they were to forgo owning a second or first car and take the train or bus instead. It’s just that the (private) benefits cars provide compared to the available public transport options are worth the additional expense.

We already know that commuters act rationally when public transport is competitive with cars; the one place where that applies in Australian cities on any sort of scale is the CBD. Upwards of 70% of all CBD workers in Sydney and Melbourne already commute by public transport, especially by train. They make that choice for two main reasons.

The key one is that traffic congestion around the dense centre, in combination with high parking costs, makes driving to work much less competitive against trains, buses, trams and ferries. The other reason is that the CBD is the one location in Australia’s metropolitan areas where the level of service provided by public transport is exceptionally good. That’s because our public transport systems are predominantly radial, with nearly all routes converging on the centre. Moreover, trains have their own right-of-way and so provide a faster trip during peak hours than cars.

The minority who continue to commute by car to the CBD in places like Sydney (18%) and Melbourne (26%) are either: strongly committed car users; prejudiced against public transport; start and end work outside the peak; or have their car use subsidised by their employer and/or the taxpayer.

There’s still scope in places such as the centre of Adelaide — where cars have 54% mode share for the journey to work — to increase public transport patronage at the expense of cars. But in cities like Sydney and Melbourne the marginal CBD worker who drives will be much harder to persuade.

The problem for commuters is that even though the public transport-rich CBDs of Australia’s major cities constitute by far the largest single concentration of jobs, the great majority of metropolitan jobs aren’t in the CBD.

For example, only 15% of all jobs in Melbourne are within 1.5 kilometres of the town hall. In fact, 71% of jobs are more than five kilometres from the centre and of these, only 20% are in significant suburban centres; the other 80% are relatively dispersed.

Jobs located outside the city centre are considerably harder to access by public transport from the rest of the metropolitan area than those in the CBD. Parking costs are also generally lower, so driving is more competitive too.

At present, the great majority of commuters in Australia’s major cities work in locations where they regard public transport as so uncompetitive relative to cars that they’re prepared to pay a big premium to drive.

There’s a suite of measures available to policymakers to improve transport in cities, including improved public transport, higher densities and better management of road use. However, as I’ve discussed before, the solutions aren’t easy.

Rail against the machine as commuter capacity hits overload