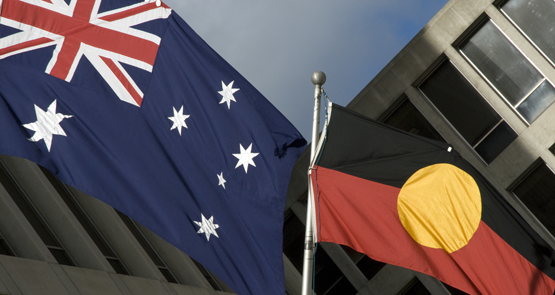 One of the more insidious ways in which indigenous Australian people have been colonised is through the rewriting of history. Alongside use of the more congenial term “settlement”, the common view is that Aboriginal people maintained little resistance to British colonisation. The reality, however, is that across the continent, many Aboriginal people waged war against the invaders for close to 50 years — a history that was not taught until the late 1960s and a history that is still not readily accepted.

The Frontier Wars are officially recorded as ending in 1838, but the resistance of Aboriginal people continued. A hundred years later, and on the sesquicentenary of British colonisation, a Day of Mourning and Protest was observed by Aboriginal people and with this, active resistance to the celebration of Australia Day was born. In time, many people proclaimed Australia Day to be Invasion Day.

At some point, however, Aboriginal protest to Australia Day was rebranded and became the more mainstream-friendly “Survival Day”. Here was an alternative celebration that was not protest, but a happy occasion, something less angry and more likely to win friends and allies in the non-indigenous community. Invasion Day highlights injustice, Survival Day celebrates continued culture; one is a bitter pill for white Australia to swallow, the other seeks to catch more Australians with honey instead of vinegar.

As with all communities, diversity of opinion exists and, in 2015, this diversity is even more pronounced. At one end of the scale, there are those who will attend Invasion Day events in order to mourn the arrival of the British and protest against the continued injustices that indigenous Australians face through to today. In the middle, the majority will celebrate the survival of indigenous people and culture at the many Survival Day concerts across the country. At the other end of the scale, and perhaps most controversial of all, Aboriginal pop star Jessica Mauboy will perform at the official Australia Day concert at the Sydney Opera House.

Mauboy has already been heavily criticised for agreeing to perform at the event and not using her public position to highlight the plight of indigenous people. Her own comments on Australia Day 2014 are symptomatic of a broader movement by indigenous Australians to be accepted by the mainstream. With language like “knowing that we can move forward and we can teach the next generation, that is the most important thing” and “I never put one side before the other”, this trend toward becoming a part of the mainstream could be viewed as an extension of the you-catch-more-flies-with-honey ethos behind Survival Day.

With Survival Day events looming large across indigenous communities and Mauboy’s star celebrity status among many Aboriginal and Torres Strait Islander people, Invasion Day protest and mourning is increasingly viewed as part of the fringe. Political polarisation in the indigenous community is becoming more evident once again, particularly as the march toward constitutional recognition progresses. Much like Mauboy’s belief that she never puts one side before the other — and similar to the idea that indigenous Australia can win more friends through celebrating survival instead of protesting invasion — constitutional recognition facilitates Aboriginal people’s subsumption into the Australian mainstream.

With the increasing sympathies toward assimilation, the stark contrast to those in opposition is rising, as is the number of people and initiatives involved in oppositional activities. The great diversity of political opinion across indigenous communities means that there are any number of alternatives to choose from. A sit-in protest in Canberra on this year’s Australia Day organised by the Original Peoples Freedom Movement calls to re-politicise indigenous events on Australia Day. Invasion Day protests are to be held in Melbourne while the Share the Spirit Festival is run mere metres away. Such activities run in concurrence with alternatives to constitutional recognition: the Tent Embassies set up in places like Redfern and Canberra, Murrumu Walubara Yidindji’s return to Yidindji Law, the Aboriginal Provisional Government and the issuing of Aboriginal passports, particularly to asylum seekers.

What these activities highlight is that just as there is increasing political polarisation in the world, there is growing polarisation in indigenous communities around issues such as constitutional recognition and Invasion Day/Survival Day/Australia Day. With a referendum forthcoming and the potential for unification of the current fringe groups, next year’s January 26 could look very different for indigenous Australia and the country at large.

*Eugenia Flynn is a Tiwi, Larrakiah, Chinese and Muslim writer living and working in Melbourne. Her writing and critical thinking can be found on her personal blog Black Thoughts Live Here

I think an under appreciated fact in this discussion is that there is a large number of Australians with no personal shared history with some of these past events.

Some of us from the post war migration groups find it difficult to take ownership of these past actions, and I know of many who are strongly of the “get over it” attitude.

Maybe it is a lack of empathy on our behalf, but I think for many who left everything behind due to bad blood between peoples don’t want to define their new national identity with another conflict.

Bizzybags, as an Australian who [using among other things readily available books printed in Australia in the 19th Century, Don’t accept the conflicting myths generated by the middle class whitey bleeding hearts and foisted onto us over recent decades.
It’s a major growth industry which hasn’t always been as helpful to those of indigenous descent as it has to the whiteys who encourage it.

Bizzybags, no-one alive now was personally involved in these events and only a small minority of today’s Australians are descendants of those who were.
Nevertheless, we all share in the benefits of colonisation.