We auction a very special bottle of red ... no outsourcing before an election ... and Fox News apologises ...

That bottle of red — up for auction. A very polite and good-natured war of words between a psephologist and a preference whisperer has come to this — a bottle of red (that could be worth a lot for charity) and a few autographs these pollies will remember signing.

“I’ll bet you a fine bottle of red on the upper house result in Victoria  –  i.e. four minor parties (minimum) will be elected!

“I might even ask Barry for red wine advice …”

After the votes were counted and the preferences distributed, it became clear that Druery had won the wager — five members from four micro-parties were elected to the Victorian Legislative Council. Richardson conceded that he had lost the bet, while Druery had plans for the wine in question:

re: a fine bottle of red.

I have a proposal for you. Your contributor Mr Charles Richardson recently acknowledged his responsibility to honour a bet of a bottle of red that would sit well on Barry’s table. This is based on at least four minor parties being elected in Victoria. Thank you, Charles …

I propose this: … Once I have the ‘fine red’ in my hands I will ask all FIVE (5) of the new Victorian Cross-Benchers to sign the red and then you wonderful  people at Crikey might consider running an auction with the $$ proceeds going to Camp Quality.

Such would be my ‘preference’.”

The bottle of wine was procured by Richardson, a shiraz from Beechworth in Victoria, and it was signed by the five micro-party MPs on the day they were sworn in. Druery also added his own John Hancock. As requested by Druery, we’re auctioning it off on eBay, with proceeds to Camp Quality, which is pleased to be involved. The five members come from the Shooters and Fishers Party, the Democratic Labour Party, the Sex Party and Vote 1 Local Jobs — with interests so varied, it’s possible this will be the only time their names are all in the one place.

The closing date of the auction is January 28, just one week away. So if you are interested in gaining this unique part of Australia’s minor party history, get bidding — it’s all for a good cause. 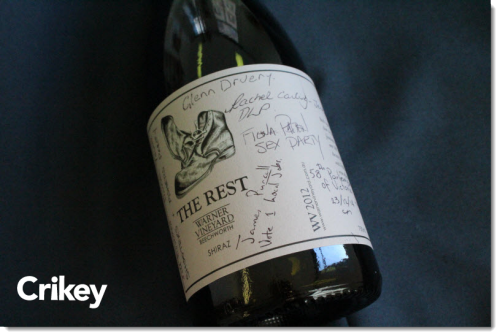 Running scared? Sydney Water, owned by the NSW government (i.e. taxpayers), has quietly done a 180-degree turn on the very touchy issue of outsourcing its huge customer call centre at Liverpool in Sydney’s south-western suburbs. Late last year Sydney Water management told staff the call centre would be closed this year and the 100 or so jobs would outsourced to the Philippines, or India.

But now Sydney Water has gone quiet because of a move by Hunter Water (based on Newcastle, north of Sydney), which has reopened its previously outsourced call centre, ending a contract with an unnamed local call centre operator. Only 13 jobs were involved in the outsourcing, and the same number are now staffing the call centre in Newcastle, which reopened in December. Why the about turn by Hunter Water? Here’s what a Hunter Water executive told the Newcastle Herald late last year:

“Acting chief customer services officer Jeremy Bath said outsourcing ‘was a decision that ultimately didn’t deliver the customer benefits we expected it would’ and ‘definitely had an impact’ on  customer service. ‘Having now recognised the limited success of the move, we are moving quickly to correct it,’ he said. Our customers have an expectation that when they call with a problem, it will be resolved then and there on the phone. ’That is not always going to be possible but we can certainly make it more likely by having the Hunter Water call centre embedded with our in-house experts.'”

In other words, the call centre was useless: customer complaints rose, water problems (especially leaky mains) went unattended for days instead of the usual couple of hours, and the call centre operators had no idea of the areas covered by Hunter Water or street addresses and had great difficulty communicating with callers. And customers complained to Hunter Water, bypassing the call centre and going to local media, radio stations and politicians.

That experience has now dropped like an unwanted penny into the thinking of Sydney Water management and Andrew Constance, the NSW Treasurer, who is very gung-ho about efficiencies. The talk around Sydney Water is that the call centre outsourcing at Liverpool is off for the moment — and everyone concerned has finally noticed the March state election.

Cars and campaigns in Queensland. There are just 10 days until Queenslanders go to the polls, and the news from up north is starting to get sillier. The latest weirdness involves Treasurer Tim Nicholls, who was part of a group that blockaded the entrance to the campaign launch of his ALP challenger, John Martin, on Sunday. Nicholls holds the seat of Clayfield by a margin of 20%, and Martin says his presence at the launch was “flattering”, to say the least. The main attraction at Martin’s launch was federal opposition infrastructure spokesman Anthony Albanese — maybe these young Libs just wanted a selfie. 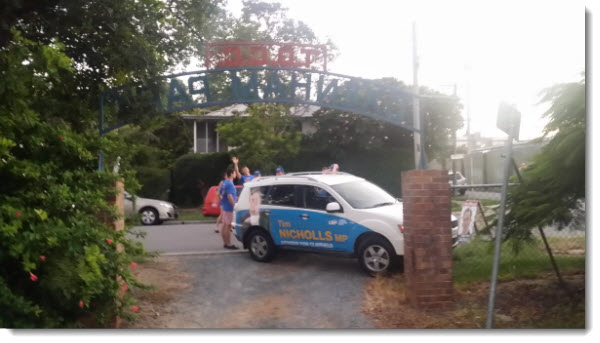 Candidates aren’t the only ones campaigning; one Crikey reader received this from ride-sharing app Uber yesterday, we’ll be watching the parties’ ride-sharing policies closely: 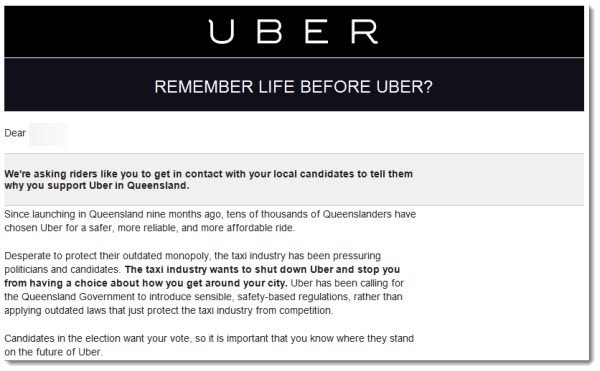 Lambie in YouTube scandal. What is it with independent senators and YouTube? If it’s not Ricky Muir with kangaroo poo, it’s Jacqui Lambie and glamour photos. It was only on Monday that we shared Lambie’s message to Queensland voters, which we said included some “terrifying” close-ups of Lambie’s photo shoot with glossy women’s mag Australian Women’s Weekly. It seems that Lambie’s message did get around, because yesterday she released this statement saying that she had removed the parts of the video featuring the photos after a request from Bauer Media. The letter from Bauer here is quite stern (you can read it here). Perhaps they would like to kick Lambie in the shins — or a little bit higher.

Fox News apologises for Islam coverage. Yes you read that right, Fox news has apologised for its coverage of issues relating to Islam — including saying that Birmingham was a “no-go zone” for non-Muslims. CNN has this nice wrap of four apologies in a row. We are now prepared for reports of pigs flying. 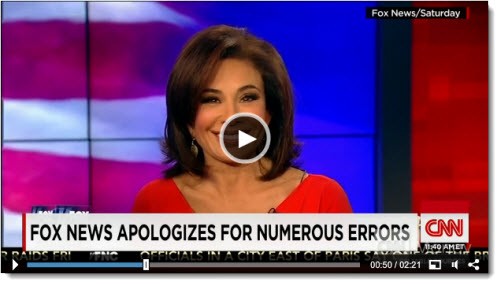 Re the Fox News apologies: perhaps the patience of the second biggest News Corp shareholder, Saudi’s Prince Al-Waleed bin Talal, has finally been pushed too far & Rupert & Co had to be reined in.

Fox News is not prone to apologies regardless of how outrageously inaccurate their reporting on any subject hence Prince Al-Waleed may be responsible for this turnabout. or, as Fox would term it, this ‘flip flop.’

You may have some problems selling alcohol on Ebay (and other auction venues) unless you are fully licensed to do so.

What can I say except well done Charles Richardson. The premium Vic wine is *FAR* more impressive than the signatures on the label. 🙂
http://tinyurl.com/k72adpp
Sláinte.