The Queensland LNP and Labor launched their campaigns this week, with both focusing on one important issue: whether Campbell Newman should be premier. 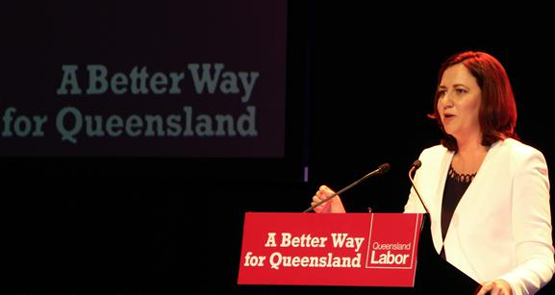 Last October, then-Victorian opposition leader Daniel Andrews officially launched Labor’s election campaign at the Geelong Performing Arts Centre. The commentators thought it was a low-key and somewhat old-fashioned affair. But the gambit worked — Andrews is now Victoria’s 48th premier, having ousted the Liberals after one term in office.

The Queensland ALP this week chose Ipswich, 40 kilometres west of Brisbane, to launch its campaign at the modest Civic Centre. Labor was hoping that some of the magic of the low-pitched Victorian launch would work in Queensland as well.

The reception for Newman was surprisingly muted, with one media observer writing:

“Barely an applause was mustered by the audience, let alone a standing ovation, as Newman listed achievements — one after the other — and rolled off billions of dollars of promises to be fulfilled once office is delivered.

“The loudest clapping was reserved for after the sudden crescendo in Newman’s speech before he abruptly finished and walked out the back door.”

Ipswich, a battlers’ city with coal mining and farming to keep the economy just ticking over, has a special place in Labor folklore. The Civic Centre was opened by the late Gough Whitlam, prime minister from 1972-75, and the city was the venue of the first shadow cabinet meeting after Anna Bligh’s government was wiped out in 2012, reducing Labor to just seven MPs.

Labor chose “struggle town” to dodge the prying television cameras, but it was also meant to symbolise Labor’s return to its “grassroots” after a decade of schmoozing city boardrooms, particularly during the reign of premier Peter Beattie from 1998 to 2007.

The star of Labor’s launch was Opposition Leader Annastacia Palaszczuk, who had to convince voters, her own party and the media that she is premier material and that she has a program to rule the state.

It was a competent performance without being inspirational. To be fair, neither was Newman. While the ex-army major is all bluff and bluster, Palaszczuk, formerly married to Melbourne writer George Megalogenis of The Australian, is a sincere plodder.

She hammered the theme that there would be no privatisation under Labor, drawing cheers from the audience: “Labor will not sell your assets.”

She spoke to the trade unions and then the Greens (for their preferences) when she committed to jobs and pledged $240 million to vocational training for young people, and $100 million to protect the Great Barrier Reef. She avoided the grandiose schemes of her opponent saying: “We’re asking you to look at our policies, the modest commitments we have made and our plan to pay down debt in a steady, measured way.”

Newman is promising the very opposite — to privatise (or long lease) strategic public utilities, raising $37 billion in order to reduce state debt and build state-building infrastructure.

Can they both be right? Economists with vested interests in profiteering from the asset fire sale are fully behind Newman’s “Strong Choices” plan. But pro-Labor academics say the sell-off, or lease-off, will cut off a vital revenue stream worth billions of dollars a year, impoverish the budget and threaten health and education spending.

One stark counter-point between the LNP’s jamboree in Brisbane and Labor’s frugal Ipswich event was the attendance (or non-attendance) of federal MPs.

Prime Minister Tony Abbott and Foreign Affairs Minister Julie Bishop snubbed the Newman launch, and he had to be content with Deputy Prime Minister Warren Truss and Attorney-General George Brandis, local politicians of no standing among Queenslanders in T-shirts and thongs.

Someone joked that tanks were placed out the front to keep Kevin “I’m here to help” Rudd from attending, but for inexplicable reasons one of the invited guests was former premier Beattie, self-confessed media tart.

Newman’s decision to call a snap poll in the holiday month of January is proving a double-edged sword. LNP strategists hoped it would catch voters when they were “relaxed and comfortable” and not wanting to do anything dramatic like changing the government. But an opposite mood is being detected in the electorate. Annoyed by Newman’s decision to run early, they are just not listening to the LNP’s message, and one voter has told Crikey: “I made up my mind about Newman and the LNP last year. Nothing they say now is going to change my vote.”

Many voters regard Newman’s “snap poll” as a barely disguised “cut-and-run poll”, and they wish the vote were this Saturday and not next Saturday, January 31.

When voters from Cooktown to Cunnamulla are anxious to vote, it is never a good sign for those in power. It usually means the punters have started to oil their cricket bats.

No one doubts that the swing against the LNP is on, but just how big is it going to be in 10 days?

Even if LNP holds on, Newman looks like a goner

Thanx for this informative update.

I am disgusted with the narky and unwarranted comments about Kevin Rudd made by every two bit journalist. Journalists seem to be like sheep – follow the party line. There are so many people I know who like Kevin Rudd. We are ordinary folk and have no connection to politics. Considering the shambles of a government being led by Abbott and Newman, I think there needs to be some perspective about the government led by Rudd. It was way, way better and there was empathy for ordinary folk, our foreign policy was considered and measured – unlike the shirt fronting that went on with TA. What about the G20 – a speech to a room full of world leaders and what TA talks about is his GP co-payment. Come on, Kevin Rudd was far superior as PM.