The Oz takes the Government's lead on wind-turbine syndrome. And other media tidbits of the day.

Pissing in the wind. Normally one goes to The Australian for the latest in climate denialism: as the in-house organ of old white reactionary men, the Oz always has the latest in cherry-picking and conspiracy theories to show climate change is just a UN world government socialist etc etc scam.  Today, though, the paper’s amusingly titled “environment editor”, Graham Lloyd, picked up the standard of an even crazier piece of wingnuttery — wind turbine syndrome.

As readers will know, wind turbine syndrome is the mysterious illness that causes over 150 symptoms but is peculiarly confined to older rural white people who haven’t been able to sell their properties to wind farm developers in English-speaking countries. The syndrome has been debunked in 20 separate reports. But Lloyd got a front page today — exclusive, natch! — on a new study by one Stephen Cooper, said by Lloyd to be an “acoustics expert”, which showed that people living near wind farms “face a greater risk of suffering health complaints”. Cooper’s work comes with the stamp of approval of the extreme anti-turbine site stopthesethings.com, although you have to get to near the end of the article on page 2 before Lloyd admits Cooper “was not engaged to establish whether there was a link between wind turbine operation and health impacts”.

The article is useful for yielding yet another addition to the epically long list of wind turbine syndrome symptoms — a 75-year-old study participant laments that she feels nausea when doing the dishes and wants to get out of the house. Don’t we all, dear, don’t we all. The joke’s on us, however: right now the National Health and Medical Research Council is, under federal government pressure, calling for expressions of interest for yet more studies into wind turbine syndrome … Can’t wait for Lloyd’s exclusives on a government study of chemtrails. — Bernard Keane

How’s the reception on that crystal ball? That towering genius of international relations and world-class panic merchant Paul Sheehan has spoken: Europe is on the boil. Paul has looked into his crystal ball. He might try getting a calendar as well, because Fairfax’s fortune-teller can’t even get his dates right. Thus, on Monday, he spaketh:

“The first political blowback to the power of the EU superstate will come in March, when Greece holds an election. The polls indicate that extremes of left and right are contracting the centre, a sure sign of volatility.

“The next test will come in April or May, when Britain will hold a general election. It will come seven months after a referendum in Scotland which saw 45 per cent of voters vote ‘yes’ on Scotland leaving the UK.”

That is going to be a shock to the Greeks, who are busy preparing for the election on January 25. Indeed, online, the error now appears to be fixed. The UK election will be held on May 7, and the subeditors haven’t gotten to that one yet. Even in the unlikely event of a government coalition collapse, the chance of an early election is zero.

Two errors in two pars, eh, Paul? Must be something in the magic water. — Guy Rundle

“When I joined the Seven Network from the ABC in 1996 as a media executive I had a sobering experience. I rang my old sparring partner from 60 Minutes, Peter Meakin, and suggested a pub lunch to discuss this practice. Within minutes Peter said he too would like to see it go and would be prepared to join me in this campaign. It cost him hundreds of thousands of dollars in handouts each year to people like weight-loss freaks, women with 200 cats and men with unheard-of diseases.

“I remained cautiously hopeful. We both took our virginal ideas to key bosses in our networks. Months later, hopes faded. New stories demanded action. Stuart Diver got trapped under a mountain of snow at Thredbo and Seven found a way to assist him long term without a public payment. Competition resumed its dominant position over principle. My purist position could barely be heard in the rush to lock up Diver before Nine did.”

Netflix soon to challenge homegrown streaming. The Netflix machine is driving onwards and upwards, especially internationally, with the company on track to introduce its Australian service in late March. The latest quarterly report shows the streaming giant’s shares jumped 12% in after hours trading on Wall Street this morning after the company reported strong fourth-quarter subscriber growth internationally (but weaker US growth for a second quarter), and sharp rises in revenues and profits. Netflix reported US$83.4 million in net profit, up 72% from the final quarter of 2013 and a 26% jump in quarterly revenue to US$1.48 billion.

It’s no wonder Fairfax Media is beating the drum so loudly about its streaming joint venture with Nine, called Stan. And it’s also not surprising Nine is promoting it heavily on TV, especially during the cricket. Seven and Foxtel have been more modest about their joint venture, Presto (which is really Foxtel’s existing service repurposed, with Seven programs and rights added to the offer).

Netflix said in a note to shareholders that net subscriber additions totalled 4.33 million in the fourth quarter, and that it expects to add an extra 4.05 million in the current quarter. Netflix is looking to add 2.25 million international subscribers this quarter, including an unknown number in Australia and New Zealand.

Tech heads reckon there are around 200,000 people using Netflix via VPNs in Australia, and earlier this month there was a scare story going around about how Netflix was “blocking” some of these VPNs. That was … well, overstated. – Glenn Dyer

Front page of the day. The Courier-Mail puts an editorial, sorry, article on the front page, but doesn’t accompany it with a photoshopped image? Oh well, there’s still time … 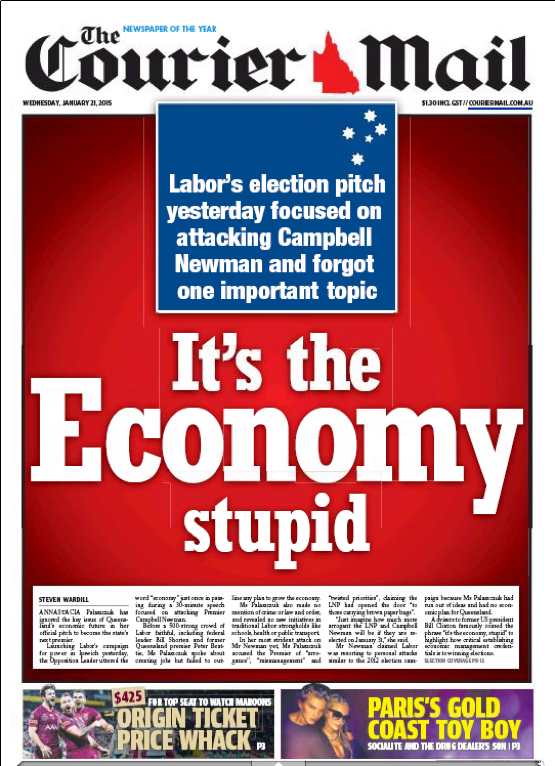 Did The Australian misrepresent the ‘hippies of Nimbin’?

They’re not even trying. Surely it couldn’t have been too hard to at least photoshop Shorten and Palaszczuk’s faces onto that important front-page Paris Hilton pic?

Should News Ltd publications now come with health warnings? Such as, WARNING: Absorbing this content is damaging to your mental health; or, WARNING: Including the contents of these pages in normal conversation, will cause people to doubt your sanity.

Then again, I suspect there’s probably a strong correlation, between people who ignore the warnings on cigarette packs and those who still consume Citizen Rupe’s wares

I never thought I would agree with Jeff Kennett, but the Sydney siege survivors selling their story is just too tacky and tasteless – I will not be watching.
Re streaming services – lets wait and see – if I don’t watch any of Ch 9’s rubbishy programs now, why would I pay to do it on the internet?

I have a feeling no ones listening to old Rupe anymore, look what happened last time they voted under Murdoch’s advise.