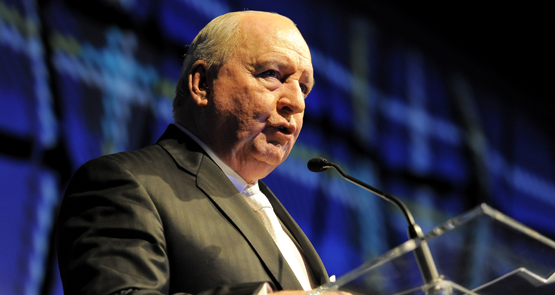 When ABC television’s Media Watch finally returns on Monday, February 2, after a long summer slumber, it will be far too late for some serious media issues around the Queensland election, which deserve to be examined before the January 31 poll.

If The Australian’s Media section can return by January 19 and Alan Jones can interrupt his summer holidays to try to bring down the Newman government, then Paul Barry’s team should be good for an election special next Monday night. (So, Mark Scott, veteran ABC chief executive and editor-in-chief, it’s still not too late to send out the command!).

Instead, all we have is this Media Watch segment from August last year.

If the first three hours of Fairfax-sanctioned ranting by Alan Jones on 4BC is any guide, he is going to deliver quite a blot on the copybook of what is supposed to be the most professional, balanced and high-quality commercial media company ever to operate in Australia.

Never before has one media professional been given such a platform by Fairfax to try to swing an election — and all this before the troubling Fairfax merger deal with Macquarie Radio has even been completed.

And you even have Jones openly telling Fairfax’s Brisbane Times website that he would refuse Newman or any of his senior ministers a right of reply, even if they asked. That would almost certainly be in clear breach of both Fairfax and Australian Communication and Media Authority’s protocols around fairness and right of reply.

Sure, Lefties, Greenies and the ALP are no doubt thrilled that the most powerful right-wing media personality and Liberal Party promoter in Australia is suddenly launching against a vulnerable and controversial conservative premier. However, just listening to the extraordinary language being deployed should appall all media and political professionals alike.

No elected representatives should be comprehensively besmirched in such a way by someone who, on this issue, is just another self-interested squeaky wheel advocating a NIMBY agenda.

However, New Hope Coal is hardly deserving of sympathy over its expanding Acland coal mine on the Darling Downs, which has so upset the squawking parrot from Sydney. And there should be cynicism about the timing of the December 22 approval announcement.

BRW last valued the Millner family at $936 million on its Rich List, and the current leader, Robert Millner, is well known for his conservative views and aggressive corporate tactics. However, it is remarkable to see two of the staunchest Liberal Party backers in Sydney going toe-to-toe over a land use issue in country Queensland.

As a shareholder in 650 companies, I get lots of letters from companies, but New Hope is the only corporate outfit that spent shareholder funds writing to me days before an election with political voting instructions.

It was the 2010 election, when miners across the country had been enraged and politicised by Kevin Rudd’s Resources Super Profits Tax proposal, and New Hope wanted everyone to vote Liberal so the mining tax would be abolished. Abbott eventually delivered in full for the coal miner.

Jones is right that New Hope has made big donations to the LNP, but so far he’s yet to bring it back to the Millner family, which has directed more than $2 million to the Coalition through the various companies it controls over the past decade.

Jones, 73, and Rob Millner, 64, are two of the crankiest autocrats in Sydney, and they must know each other from the Liberal Party fundraising scene, seeing as The Parrot has been MC at dozens of them over the years.

Media reports suggest the LNP is heavily cashed up for this current campaign, but by having the election on January 31, there will be less visibility into this historical fundraising activity when the annual deluge of donations data is released at 9am on Monday, February 2.

The Bligh government passed major campaign finance reforms in May, 2011, which lead to some earlier and more comprehensive disclosure, although the Newman government has subsequently watered down some of these provisions, as Labor highlighted in its campaign launch yesterday.

As a rent-seeker and power-broker itself, News Corp is traditionally reluctant to delve into campaign finance issues. It would be in the public interest if The Courier-Mail took a solid look at these issues over the remaining days of this ridiculously short, silly season election campaign.

Bligh’s Labor government went much further than what pragmatic Labor Right fundraisers would tolerate elsewhere in Australia. For instance, would a Palaszczuk Labor government even go back to Bligh’s spending caps?

They’re public servants, Stephen. 2 months off air a year is an “entitlement”

That parrot should have been stuffed in a chaff bag etc long ago, so your timing is a bit off.

This little attention getting tirade by Jones is, as usual, a joke.
On the 10th of September 2014 Jones held an interview with Lord Christopher Monkton ( Can you get more pretentious than that?) in which they both rubbished, renewable energy and global warming and insisted that preventing coal mining was a ” communist plot”. Now Jones has the audacity to criticise Newman because he, Newman, had supposedly “promised” Jones he would not allow the Acland coal expansion. First up, what utter hypocrisy and second who does Jones think he is to believe he is, exclusively, allowed a promise from a State premier ?

Just because two of ones enemies attack each other it does not make either a friend.