It's been a rough week for Labor's campaign in Queensland, with leader Annastacia Palaszczuk's media profile shrinking compared to last week.

Immigration Minister Peter Dutton may have left the health portfolio minefield, but he’s ended up in at least as hot a portfolio, with hundreds of asylum seekers on Manus Island spending the week protesting, including hunger strikes and claims of blockades within the detention centre. Some detainees, alleged to be the ringleaders of the protests, have been removed by PNG police.

Dutton’s replacement as Health Minister, Sussan Ley, climbed further up the list as the fallout from another change of direction on Medicare payments policy continued late last week, with some reports claiming the government might abandon attempts to cut spending via Medicare altogether. Treasurer Joe Hockey was back on deck at the start of this week with claims he warned the PM to stick with the original GP co-payment and not try and sneak it through another way, but also facing criticism for another off-the-cuff comment when he claimed cuts were needed because people might live to 150.

The other main mover in a relatively low volume week was Independent Senator Nick Xenophon, who weighed in on tertiary education reform, calling for a comprehensive review and suggesting more freedom for universities to set fees. 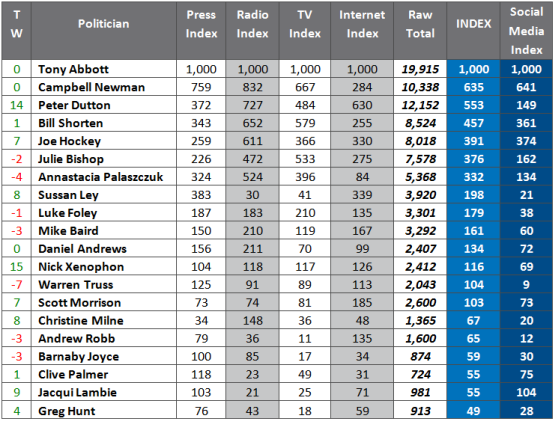 The Queensland election continues to be a main political feature of talkback discussion, although Opposition Leader Annastacia Palaszczuk’s profile has actually dropped this week across all media, including talkback.

It’s not that often you get the same five people at the top of the social media list as the full media index, but health policy, the Queensland election and asylum seekers have dominated both.

A huge amount of free publicity for Triple J out of the Taylor Swift Hottest 100 campaign. It may look like the “musical snobbery” of the Jays is being attacked, but you have to care about the Hottest 100 in the first place to be bothered trying to change the outcome, right?