Mamamia chief to parliament? ... rebates and profit gaps at Spotlight ... the Americans still don't get us ...

Rizvi for Wills? It’s coming up to preselection time for the next federal election, and there’s a rumour going around that Wills MP Kelvin Thomson may face a challenge from an unexpected quarter soon. Rumour has it former Rudd staffer Jamila Rizvi, who’s now the editor-in-chief of Mia Freedman’s Mamamia, could well throw her hat in the ring for the inner-Melbourne seat, formerly held by Bob Hawke.

Rizvi got married at the end of last year and is expecting a baby. But she’ll have to start now if she wants to be considered in two years’ time. She declined to comment on the rumours, which Crikey understands did not come from her.

Insiders cautioned there’s a lot to count against her. For one, she’s a Sydney girl (though from Canberra originally). But Ms Tips understands the Victorian Right are unlikely to object too strongly at the thought of Thomson having some competition. “The cavalry won’t be riding in for his defence, put it like that,” one insider said. Since Thomson gave a personal reference to gangland figure Tony Mokbel (called him a “family man” — you couldn’t make this stuff up), he’s been cooling his heels on the backbench. He’s not really seen as a team player — his passion is a sustainable (i.e. smaller) Australian population, which love it or hate it isn’t really a topic the Labor Party wants to spend too long talking about. Given how safe Wills is, Labor honchos would rather see a cabinet minister holding it. Whoever takes over the seat when Thomson either retires or is pushed out will face high expectations. Rizvi’s isn’t the only name being muttered. We’ve also heard David Feeney staffer Ben Maxfield’s name thrown into the mix. Watch this space.

Correction/Update: On Twitter, Rizvi says she joined the Labor Right at 19. “With a crazy wonderful busy job and a baby on the way, politics is really not something that’s on my radar right now!”

Spotlight on Spotlight. After Coles was fined $11 million late last year for bullying its suppliers, we heard from a tipster that craft and sewing giant Spotlight should be investigated for similar practices:

“Everything Coles did to rip off suppliers is done by Spotlight Pty Ltd and much worse. Suppliers can’t take them to ACCC because they will lose them as a client and Spotlight has no real competition. They know there is nowhere for suppliers to go. They have already sent many broke. Suppliers are screwed.”

We asked Spotlight if it had rebate policies with suppliers or required suppliers to fund profit gaps for promotions, and were told:

“All of Spotlights vendors sign confidential trading terms as part of doing business with us. We do not require our suppliers to commit to anything over and above these terms, unless agreed to by both parties prior.”

That didn’t quite answer our questions so we asked again if such practices were actually in the contracts and did not receive a reply. Do you know more about how Spotlight treats its suppliers? Let us know and remain anonymous if you want.

Asian Cup allows discrimination. Last October, when the Asian Champions League final was held in Saudi Arabia, the brutal theocratic clan that runs that country — it has already beheaded nine people in 2015 alone — graciously allowed a single female supporter of the Western Sydney Wanderers into the stadium to watch the match. This is a country that until recently refused to let women represent the country in sport and that bans women from watching soccer matches, and woe betide any woman who bares her arms cheering for her team. What the Saudis do in their own country is their business, we guess. But in Australia, it seems sporting organisers are eager to import Saudi values here. Last week Fairfax reported that the Saudi soccer team here for the Asian Cup refused to board a bus with a female driver and had to be assured they wouldn’t be given a female driver thereafter. How such a commitment from Asian Cup organisers fits with Australian anti-discrimination laws isn’t clear, so we asked the Cup organisers’ media manager Doug Conway about it. We also asked whether, if the Saudi team had refused to accept a driver who was Jewish, or atheist (Saudi Arabia recently legislated that atheism is terrorism) or Shi’ite*, organisers would be similarly eager to pander to the Saudis. Conway was unable to produce a response by deadline, though we’ll happily run it if it ever shows up. Meantime, let’s hope the Saudis don’t ask for women to be banned at their matches here. (*corrected from “Sunni” in an earlier version; Crikey apologises for the error)

Howard in a headlock. In relation to the origin of John Howard’s anti-union views in the 1980s a reader and former journalist points out “I don’t think then-treasurer Howard (accompanied by Doug Anthony) ever got over being jostled quite violently by striking miners at Blackwater in Central Queensland. He was genuinely frightened, and fear can generate a powerful hatred. I don’t say it’s the only reason Howard became a union hater, but I do believe it’s a factor.” The 1980 Blackwater strike was in response to repeated efforts by the Fraser government to tax miners’ subsidised housing (there’s an account here); according to one report of the Howard/Anthony visit they were pelted with eggs, and Howard was placed in a headlock by an assailant. Our reader also reminisces:

“I covered the so-called ‘Blackwater Rebellion’ and well remember a road train stopping outside the pub. The driver said that a ‘beast has gone down in back and broken a leg. Did any bastard have a gun?’ I think it was the chemist who said he had a rifle, which he fetched. The pub emptied of the strikers, who came out to watch the drama and maybe plan their steak dinners. The chemist asked the driver which animal needed putting down and the reply came … ‘which one would you bloody like?!'”

The Slap goes American. The history of Australian shows adapted for American audiences has a chequered history, and NBC is the latest network to give it a go, producing an American adaptation of Christos Tsiolkas’ book The Slap, which was aired as a mini-series here in 2011. Melissa George reprises her role as Rosie, but the rest of the cast is new. The trailer was released over the weekend, and it looks like it’s not straying too far from the original. 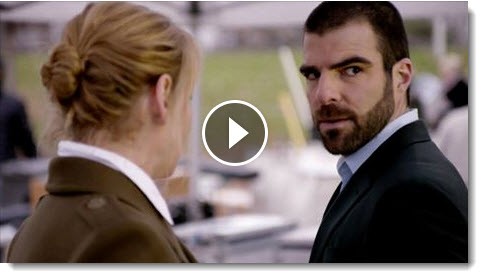 Heard anything that might interest Crikey? Send your tips to [email protected] or use our guaranteed anonymous form.

Even though I don’t like soccer very much, if the Saudis tried to ban woman from their matches here (would they be that silly?) I’d go anyway, just to annoy them.

Re The Slap: I’d be astonished if Hugo’s breastfeeeding scenes are replicated in the US, certainly not as honestly as in the original Oz version.

I’d put on a frock and go too.

I think that you meant to query whether a Shia bus driver would be acceptable to the team from our brutal theocratic great ally & friend.