Labor and the LNP agree on one thing in their election campaigning: it's all about Campbell Newman. 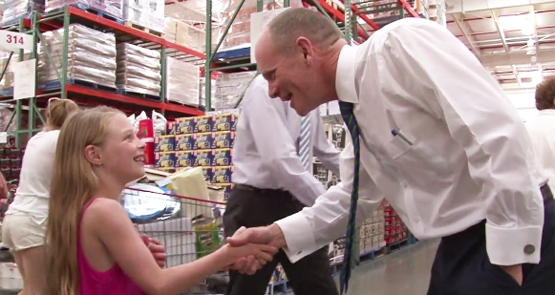 After spending three years on the wrong end of Tony Abbott’s brutally effective blowtorch while in government federally, Labor has had good cause in recent times to bemoan the impact of negative campaigning on our singularly unkind and none-too-gentle polity.

However, the eerily upbeat tone of the campaign presently being waged by Campbell Newman and the Liberal National Party in Queensland might have Labor MPs wondering if they ought to have been more careful about what they wished for.

When Newman swept to his crushing victory in 2012, he did so on the back of a campaign that offered a textbook mix of positive and negative messages. Television viewers were alternatively treated to Can-Do Campbell the action man with his positive plan to get Queensland back on track and images of a flyblown Labor brand that was understood to bind the Bligh and Gillard governments together as symptoms of the same disease.

But this time around, the LNP campaign seems to have dispensed entirely with the latter part of the equation.

It’s not as if the ALP in Queensland hasn’t given the LNP any material to work with in pursuing its traditional lines of attack.

Since losing office in 2012, the party’s state conference has come under the control of the Left faction for the first time in its modern history, and key aspects of its economic policy have been attributed to the renewed assertiveness of industrial unions that were in revolt against the party during the last years of the Bligh government.

As for its leadership, Annastacia Palaszczuk sits at the head of a meagre parliamentary team by virtue of being the least junior figure left after the decimation of 2012, and she seems primed to be portrayed with an L-plate hanging around her neck, as was done to such telling effect with Mark Latham in 2004.

Despite all that, the Windows Movie Maker template the Coalition parties seem to have for assembling their attack ads — featuring a deep male voice, one-note musical backdrop, grainy images of Labor and union villain figures, and a choice of two colour schemes (black, white and red; or black, white and yellow) — hasn’t yet been put to use.

Displaying remarkable equanimity about his mediocre-at-best poll ratings, television spots have instead focused on a cheerful Campbell Newman as both narrator and onscreen talent.

Newman has not had the stage entirely to himself, with the recurring motif of campaign material being an image of him together with four other government figures — Tim Nicholls, Jeff Seeney, Fiona Simpson and Deb Frecklington — who appear to be residing over a cabinet meeting, looking appropriately serious and businesslike.

Since women are, in fact, no better represented in Campbell Newman’s cabinet than they are in Tony Abbott’s, the cast has clearly been chosen to give a less-than-accurate impression of the government’s gender balance (though interestingly, the women featured are not, in fact, the two who do actually sit in cabinet).

Tellingly, the second most prominently featured talent in the ads is Tim Nicholls, who as Treasurer has served up a series of tough and unpopular budgets. In one ad that focuses specifically on the government’s economic and budgetary credentials, Nicholls features in close-up as Newman spruiks “a plan we know we can pay for”, while the words “fully costed, fully funded” appear onscreen.

It’s been a long time since an election campaign was so determined to accentuate the positive, for the simple reason that distrust of the political class means negative messages are more apt to be believed than positive ones. If the tactic indeed delivers the goods, it will serve to emphasise the unusual circumstances of the campaign.

As much as the electorate disliked the tough medicine of the government’s first term, and as hostile as it might be towards the program of asset sales proposed for the second, the sheer parliamentary dominance of the LNP is such that it is unquestionably better placed to offer the stability and cohesiveness that voters so value.

By simply ignoring its opponents’ existence, the LNP seeks to leave Labor on scarcely higher a pedestal than the various minor parties currently doing the rounds, in much the same way that the Liberal and National parties were placed when Peter Beattie reduced them to a parliamentary rump amid the chaos wrought by One Nation.

The Labor campaign can alternatively be seen as the polar opposite of the LNP’s in being negative rather than positive, or as a dead ringer for it — given it’s all about Campbell Newman.

Labor’s YouTube channel showcases three television spots (or four, if 15-second and 30-second edits of the same ad are counted separately), none of which acknowledge the existence of Annastacia Palaszczuk or any other Labor politician. Two of the three are solely concerned with asset sales, and there is no mention of anything Labor might have planned if it wins office.

Perhaps that’s about to change today, when Palaszczuk conducts the party’s campaign launch in Ipswich.

But for the time being, the election appears to loom as an intriguing real-world test of the relative effectiveness of positive and negative campaigning, along with long-held but rarely tested assumptions concerning the timing of elections.

Even his ads are bull-shit.

I’d suggest significant credit for the Coalition’s surprisingly good situation needs to be given to the Left Powerbrokers in Qld. They showed their hand a long time back by such actions as removing a talented M.P. because she declined their ‘suggestion’ to appoint Party Hacks in her Office.
On the positive side [from a Labor perspective] showing they can lose this Election hopefully might lead to a GENUINE reform of the Party?

Queenslanders….if you think, even for a moment that Campbell Newman is working for you then you have got rocks in your head.

Put the LNP last and the rest is up to you.

Don’t give Abbott the pleasure of an LNP victory.

That kitchen cabinet scene – “Manuel”, “Porkies”, “Franko(phile)”, “Marge” and “Freckle” – more like a swingers party – pass on the ash-tray.