Is Jones the king-maker, or does he just pick his fights well? Radio insiders muse on whether Queensland Premier has to worry about his latest enemy. 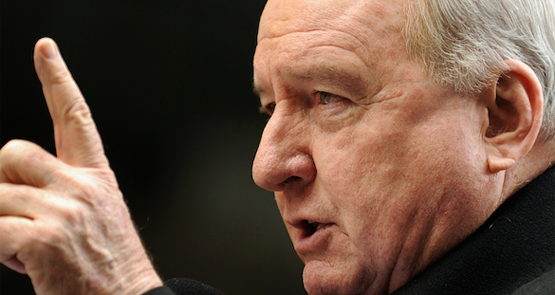 Shortly after 9am Sydney time yesterday, shock jock Alan Jones took to the airwaves in Brisbane, and at Fairfax-owned talk radio station 4BC, the lines went into meltdown.

Jones was presenting, from Sydney, the first of what will be 10 hour-long talkback sessions to air in the lead-up to the Queensland election. He used his first to accuse Queensland Premier Campbell Newman of nothing less than being a liar. Jones claimed Newman had visited him at home at the urging of senior Liberals and promised to oppose the New Acland coal mine on the Darling Downs, which his government later approved.

“Campbell Newman lied to me. I have no reason to believe anything he says,” Jones said on Monday.

Newman didn’t respond directly to the allegations, telling The Australian they were nothing new. Nonetheless Jones, who reportedly signed a 22-year contract giving him a base salary of $4.5 a year contract with his employer last year, certainly garnered the attention of the national media. It seems locals tuned in as well — 4BC’s online streaming player grew its traffic three-fold.

“The phones lit up with calls from all around Queensland,” 4BC general manager Anthony Frangi told Crikey yesterday about the broadcast, which only aired on Brisbane radio. “We weren’t able to get all the calls to air.” The radio ratings period only began yesterday, so it will be some weeks before the success of the Jones experiment is known. Even then, media analyst Steve Allen notes, it’ll probably be hard to tell, given Jones will only be on air for a fortnight in a six-week ratings period (Allen thinks Jones will rate well, but not as well as he does in Sydney).

But early indicators are positive, Frangi says. There’s certainly been strong interest from advertisers in having their ads run during the slot manned by the undisputed king of Sydney talkback.

It’s an interesting experiment. Many say there’s something very Sydney-centric in Jones’ appeal. Though Jones grew up in Queensland (near Acland where the mine is situated), it’s in Sydney that he’s made his mark, a fact Newman was quick to point out: “Alan Jones is a bloke from Sydney,” he said yesterday. At times Jones’ lack of local knowledge showed during yesterday’s broadcast. As QUT’s Brian McNair noted, Newman repeatedly said Newman held 78 seats in Queensland’s 89-seat parliament. That was the case in 2012, but it isn’t anymore. Newman, having lost some seats through resignations and defections, is now down to 73.

Asked whether Jones would be seen as a “bloke from Sydney”, Frangi said he wasn’t unknown to 4BC’s listeners. “When he was on 2UE before 2GB, he presented a regular one-hour slot on 4BC. He’s played some part in 4BC for years.”

Jones has indicated he plans to continue to hammer the Premier on the mine, telling The Australian yesterday that “the man [Newman] cannot be trusted.” With an election days away, should Newman be worried?

Walkley-award wining journalist Chris Masters, the author of an unauthorised biography on Jones, says the shock jock wouldn’t be as successful as he is if he weren’t perceived to shift votes. But as to whether he actually does, well, Masters is sceptical. “His influence tends to be overstated, I think. He has a large radio audience in Sydney, but his television reach [through Sky News, where he has a show] is minimal. The reason he appears to have a lot of impact is because he gets quoted a lot. And he plays the game really well.”

“A lot of people who wear the mantle of king-maker, they make sure they pick the right man to begin with.”

Jones has plenty of defenders in Queensland, who remember him from his earlier days there, Masters says. And he still keeps a hand in the community, owning several properties in Queensland and regularly going back. But he’s got enemies in the north too, and Queensland politics is notoriously a world apart from what happens in Sydney. Outside of New South Wales, it’s harder to find politicians who pay careful attention to Jones, Masters says. “Peter Costello in Victoria, for example, didn’t bother much. If you’re in Sydney, it’s more up-close and personal with Jones.”

One talkback radio insider says Brisbane wouldn’t have seen Jones’ style of talkback since John Laws stopped being broadcast there in 2007. Many conservative listeners, the insider muses, would be puzzled to see Jones line up with the Greens on coal seam gas policy. But Jones’ ability to influence the news cycle shouldn’t be discounted. “His impact will be on the opinion-makers,” the insider said. “If he makes allegations, other journalists will pick those up and ask Newman about them. That’s not an insignificant impact.”

In 2006, Clive Hamilton did a study for The Australia Institute looking at just who listens to Jones’ show. Drawing on Roy Morgan research, he concluded Jones’ audience were twice as likely to vote for the Coalition than the general population, 67% were over 50, and they tended to believe Australian values were under attack. “His listeners were more conservative and authoritarian in their views than other Australians”, the study summary states.

These demographics “aren’t generally swinging voters”, says University of Melbourne political messaging expert Sally Young. And there’s fewer of them than there used to be, she adds, arguing that the power of all talkback hosts has declined somewhat in recent years. “John Howard thrived on talkback radio. The enduring political image of him is sitting in a radio booth talking to the public. Howard made it his main form of communication, and the other media had to follow.” Modern political leaders haven’t adopted the same strategy. This means the ability of a talkback host to direct the media cycle has declined from its peak.

Others were not so keen to discount Jones’ influence. Wendy Harmer, editor-in-chief of The Hoopla and for years was a host at 2DayFM, says a large part of Jones’ popularity lies in the fact that he’s far more nuanced politically than those who don’t listen to his show would suppose. His greatest influence, she says, can be seen in his championing of particular causes. Not all are what you’d expect. For example, he’s been a huge champion of specialised care facilities for young people with disabilities, so they don’t end up placed in nursing homes. He’s also most recently taken up the coal seam gas cause, which is no doubt part of what brings him to Queensland.

His opposition to the Acland mine is interesting because it shows a local, passionately held community cause coming into conflict with a conservative government. While Jones has stopped short of calling on people to vote for Labor (he’s telling them to take a close look at independents running in the race), he is cautioning them against a vote for the LNP. He is highly unlikely to win the election for Labor, but he’ll undoubtedly do a lot to make the Acland mine an election issue.

Instead of just pouring cold water on Jones’ influence, shouldn’t the left acknowledge his help and embrace him? All ironies aside, (and there are plenty!), its not the first time one of their bitterest enemies has become their best friend.

Its usually assumed that the “enemy” has shifted position – or just become a nicer person like Malcolm Fraser. But there is another theory…. (fill in blank space here)

Jone’s real enemy is anyone who disagrees with him. It’s not a political thing, it’s personal.

Also – can it be true he signed on for 22 YEARS! Surely that can’t be right?

So it it Campbell Newman that’s “destroying the joint” now? [Actually, if the Greens get in, will they let me “destroy” a joint? Or is that the NSW Libs?]

No Russell, one can’t embrace this man, but one can be happy that he at least sees the coming Carbonocalypse.

[OMG 22 more years! Surely his audience would be dead?]

Just thought I’d point out that the 22 year thing isn’t a typo. I haven’t investigated it myself but it’s definitely what’s been reported (and not, to my knowledge, ever rebutted). Jones plans to be around until 2036.

Well, “the man [Newman] cannot be trusted.” by a paid up ultra rich member of the big end of town.

How does that sit with the received wisdom about LNP loyalty down here in the Crikey crypt?