Want to buy Australia's most awarded Indigenous publication? And other media tidbits of the day.

The Walkley-winning, weekly indigenous newspaper’s recent troubles seem to follow a dispute over an unpaid legal bill to law firm Gilbert + Tobin. The first meeting of its creditors is tomorrow in Sydney. — Myriam Robin 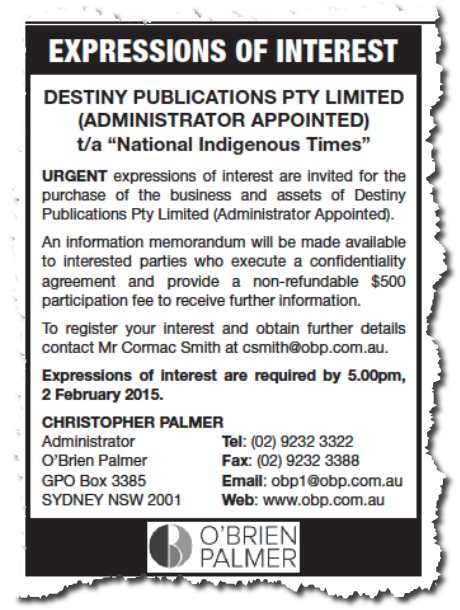 How much is an exclusive worth? Sydney siege survivor Marcia Mikhael has reportedly been paid either $350,000 or $400,000 to appear in an exclusive interview with Channel Seven.

That’s according to reports in the Daily Mail and The Australian, though Fairfax yesterday reported the true figure was likely to be lower. The Westpac executive appears to have secured the greatest individual payout, after Channel Nine signed up between four and 10 hostages (accounts in the Oz and the Daily Mail vary) to share in $1 million to appear on 60 Minutes. This comes after Mikhael’s lawyer Jason Arraj reportedly refused an interview from The Australian, telling the paper’s reporter he didn’t want to be insulted with an offer of less than six figures to speak to his client. Mikhael, a mother of three described by television insiders as “extremely telegenic”, won’t be keeping the money, according to her lawyer. It’ll be instead donated to a charitable foundation she intends to set up.

A few hundred thousand is serious money, but it pales in comparison to the greatest TV payout, when Nine secured an interview with the Beaconsfield miners. That jackpot was $2.6 million — a record figure helped along by Nine’s then-CEO Eddie McGuire being unusually willing to splash money around for the big interviews.

But it’s harder to monetise the big names these days. There arew more channels, so people are more likely to be watching something else. Media analyst Steve Allen told Fairfax yesterday he thought $300,000 was the most a TV network could justify on an exclusive interview these days.

Last year, Channel Seven is believed to have paid for exclusive interviews with Schapelle Corby and Rachel Louise, the girlfriend of murderer Simon Gittany. The full amount paid for Corby never leaked, though TV insiders have said it was a fraction of the $3 million figure floated in the press at the time. Seven has rubbished claims that it paid $150,000, with then-Sunday Night EP Mark Llewellyn saying it was wrong “by a considerable margin”.

Who was paid the most for TV interviews?

Hate poetry. From a card sent by “Wig Wam” to international correspondent Hamish Macdonald after he made an appearance on Radio National, as he shared on Twitter this morning …

Your Eurocentric views
Are online for free
Why on earth are you
On our ABC!!!

Downton gets a sixth run. Overnight, American TV critics on the winter tour — when they travel across the country to talk to TV networks, production companies and other major players — sparked the idea that Downton Abbey could be finishing after the sixth series (which starts on PBS in the United States in January next year after airing in the UK this northern autumn). The reports were triggered by the circumspection shown about the program’s future by PBS and comments late last week from the head of NBC, which owns the company producing Downton Abbey.

NBC chairman Bob Greenblatt announced that the network now had Julian Fellowes’ period drama The Gilded Age on the front burner and was now actively thinking about it in future scheduling. (Fellowes is also the creator of Downton Abbey.)

“I think he’s at a point now where he’s able to start developing and writing our new show,” Greenblatt said during NBC’s portion of the tour. “Hopefully this show will be coming to life sometime in the next season.” Greenblatt announced The Gilded Age more than two years ago, after lining up Fellowes to create and produce the fictional saga about New York millionaires in the late 19th century. The Gilded Age was put on hold after Downton’s success.

Then, overnight, PBS chief Paula Kerger was asked by the media if The Gilded Age would “affect” Fellowes’ work on Downton Abbey. “Nope. We’re planning on season six,″ she said. Kerger refused to speculate beyond series six, leading some commentators to wonder if Downton Abbey might be about to end. But that decision rests with ITV in the UK, which is the prime commissioning network. — Glenn Dyer

Jones has arrived. An ironic placement in yesterday’s News Corp-owned Courier-Mail. 4BC is owned by Fairfax, which also employs Alan Jones now.

Nine rains on a <em>Parade</em> of quality drama

Can we please stop calling every two-bit “hostage drama” a siege? Man Haron Monis was a nutter with a gun who held people hostage.