A Sydney doctor and refugee advocate says the hunger-striking asylum seekers on Manus Island are not receiving proper medical care -- and the results could be deadly. 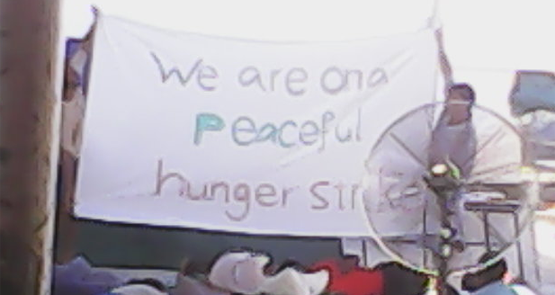 Picture from inside the Manus Island Immigration Detention Centre, where the hunger strike is taking place

Asylum seekers on hunger strike on Manus Island are failing to receive appropriate medical attention consistent with standards set by the company contracted to provide medical services in detention, a medical expert says.

Dr Barri Phatarfod from Doctors For Refugees says that a person on hunger strike needs to be monitored almost constantly in order for symptoms such as organ failure to be detected, but that this is impossible on Manus Island at the moment as there is not enough staff or facilities to deal with the crisis. Phatarfod says contractor International Health and Medical Services has long had a protocol for dealing with hunger strike, which conforms to international human rights standards, but it’s impossible to follow that protocol with the scale of the hunger strike and staff available. Phatarfod says the first action to deal with people who are refusing food is to remove them from their environment, greatly increasing the chance that they can be treated.

“If you take them away from their environment, ideally to a hospital, you can negotiate with them with the help of a psychiatrist. They also need to be monitored — their blood pressure, heart rate, temperature and urine output,” she said.

Manus Island generally has two to three doctors on duty at any one time, as well as a psychiatrist and senior medical officer, according to Phatarfod, which is not enough to monitor the health of the hunger strikers. “This is such a recipe for disaster, what they’re doing.”

Martin Appleby, a former guard at Manus, said that for an emergency such as this, there is “no ability to scale up staff. I doubt the budget would have increased for any services on Manus.”

Phatarfod says the medical care available on Manus Island is “very rudimentary” and Appleby said “I’ve never even seen IV drips up there, not to say there’s not”.

According to Phatarfod, “people who are unconscious in residential blocks can’t get to the medical centre, so they’re lying in the sun waiting for a staff member to come with transport”.

The Refugee Action Coalition is today reporting that asylum seekers are refusing to go to the medical compound, as they fear being held in isolation.

With 700 asylum seekers still on hunger strike (though the blockade in one of the compounds has ended), Phatarfod says that asylum seekers need to be taken to the hospital in Port Moresby to be properly treated.

International Health and Medical Services describes what it does as “manages health systems on behalf of governments and international organisations. We provide healthcare in both remote and urban settings, delivering a consistent standard of care even in physically and culturally challenging environments.” Its parent company is International SOS, a Singapore-based medical security company with offices around the world. Medical security means that it provides Western-style health services in countries all over the world for corporations with international offices. Most recently it launched an “Ebola app”, which gives advice and news on the disease to users.

Angela Mitropoulos, a Sydney-based academic in cultural economy, says there are fundamental problems with companies like IHMS providing healthcare to asylum seekers.

“The most important thing about IHMS and International SOS is they are not healthcare companies. They are global medical security companies, in that they don’t simply deliver healthcare to patients, rather they are contracted to manage the health, financial and other risks that arise from government and corporate activities,” she said. Mitropoulos explained:

“IHMS and ISOS are contracted by governments and businesses as a requirement of insurance contracts and as part of risk management procedures. Those companies are the two sides of international people movements from the perspective of insurance, one involving the movements of asylum seekers (which would be treated as an uninsurable risk, except that detention makes it possible for that risk to be calculated and hence become a source of profit), and the other involving those whose movements that are part of government and corporate business. ISOS is business class, IHMS is not even economy class since it’s involved with indefinite detention.”

IHMS has four contracts with the Australian government that cover running health services at immigration detention centres in Australia, Nauru and Manus Island worth $1,255,633,652 — behind Serco and Transfield, the company is the third biggest contractor in running detention centres, and as far as we can tell, this is the company’s only income. Offshore detention centres cost the government about $1 billion annually, $200 million of which is spent on healthcare.

It’s amazing to me the billions we feel we need to waste on this persecution of innocent people.