The protests, self-harm and violence won't stop on Manus Island - they're a logical consequence of the way Australian policy has evolved. 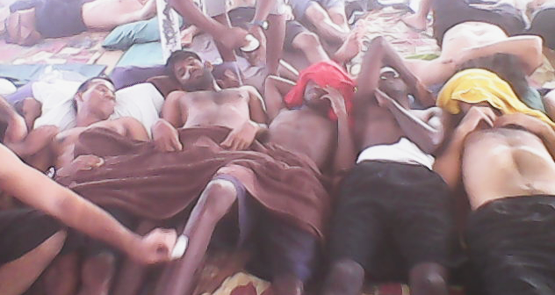 As is always the case with asylum seeker policy, much of the reporting on the current disturbances on Manus Island, and nearly all of the government’s response, is based on moralising. Both coverage and commentary in The Guardian, which devotes considerable space to the asylum seeker issue, is based on a standing objection to offshore processing of any kind; an op-ed today compared Australian policy to terrorism, yet another addition to the long list of ways in which the Left has demonstrated its utter inability to meaningfully communicate with mainstream voters about asylum seekers.

But the government’s response, too, is based on moralising. Last week, new Immigration Minister Peter Dutton, the man who proved a comprehensive failure in the Health portfolio, referred to “ringleaders and … people outside of the facility who believe that they are helpful in agitating for noncompliance” and “people that are stirring trouble”. Yesterday he referred to the “failure of this group to cease their disturbing actions” as “irresponsible”. They had, he claimed, threatened staff; he attacked the media for reporting the claims of detainees and asylum seeker advocates (while refusing to allow the media access to the facility to test claims) and demanded detainees “cease their aggressive actions”. The Prime Minister cast the issue purely as one of control versus chaos, saying “the important thing is that order has been restored”, just as former immigration minister Scott Morrison immediately followed his acknowledgement that Reza Barati had been killed by observing that breakfast had been served in the facility.

The relentless focus on moralising from both sides obscures the extent to which what is happening on Manus Island — and it will go on happening, regardless of how often “order is restored” — is a policy failure brought about by the evolution of one component of asylum seeker policy — deterrence — faster than others.

Go back to the recommendations prepared for the Gillard government by Angus Houston, Michael L’Estrange and Paris Aristotle in 2012 — the last serious attempt to craft a coherent policy response on asylum seekers. That group sought to address the problem of fatal boat trips by asylum seekers by rebalancing incentives dramatically away from maritime boat arrivals toward more traditional forms of humanitarian resettlement — significantly increasing the latter (since reversed, then partially un-reversed, by this government) while re-establishing offshore processing and applying a no-advantage principle. Under that principle, maritime arrivals who wanted to come to Australia would get no advantage over an applicant stuck in a refugee camp on the other side of the globe. But recognising that this would occasion an extended period of detention, potentially for several years, it recommended that high-quality health and education services be provided by detainees held offshore, including, crucially, mental health services.

“This isn’t a coherent policy. Its logical endpoint is that detainees will either give up and return to their countries of origin (which so far shows little sign of happening), kill themselves in detention or be killed by angry locals.”

To the extent that the “no advantage” based policy was ever applied systematically, it was abandoned by newly restored Kevin Rudd altogether in 2013 when he announced a deal with Papua New Guinea, in which that government would be bribed to permanently resettle asylum seekers, allowing Rudd to tell asylum seekers they would never come to Australia at all. While Scott Morrison added the flourish of turning back boats (breaching international law and offending Indonesia in doing so) and running prison ghost ships off Christmas Island, current Australian policy essentially started with the Rudd announcement. The deterrent would now be that not merely would you never settle in Australia, but you would instead be sent to Papua New Guinea or Nauru, both of which are arguably worse places in which to live than the countries that asylum seekers have fled from. Deterrence had switched to exemplary punishment. And the punishment was made all the worse by PNG’s refusal, for an extended period, to actually process anyone. The policy has long been, in effect, one of offshore detention, not offshore processing.

Along the way, the Houston-L’Estrange-Aristotle coherence was lost. With the focus on punishment, any concern for the welfare of detainees (which is what they have been, rather than “transferees”) was abandoned. The murder of detainee Barati by a PNG local working for a service provider, rather than signalling problems in the policy, was used by then-minister Scott Morrison in the same moral terms as Dutton — Barati, Morrison initially claimed, was responsible for his own murder because he’d tried to escape, and it should be a lesson to other detainees. Morrison later backtracked when the truth emerged that the only escape Barati had been attempting was from people trying to murder him within the facility.

That sordid moment of Morrison moralising illustrates another feature of the government’s response — to attempt to cover any embarrassing issue up. It does this by refusing to allow media access to the facilities, by the Immigration Department trying to prevent contractors from revealing the truth about its treatment of detainees on Nauru, and by insisting only its version of events on the ground is true — even though we know how Morrison twisted and obfuscated, if not outright lied, about the murder of Barati.

But just as the Left’s moralising about asylum seekers could never wish away the core problem — the absurd refrain “let them all come” simply glossed over that that meant handing over control of Australia’s immigration program to self-selecting, well-resourced migrants and people smugglers — the government’s moralising about miscreant asylum seekers and irresponsible supporters can’t cover up and wish away the result of the Rudd-Abbott policy of punishing asylum seekers. The policy has, according to publicly available information, been effective in stopping maritime arrivals, but it leaves hundreds of detainees in Australian hands (however much we might pretend they’re PNG’s responsibility) in a tropical purgatory with a snail’s pace assessment process and release into the PNG community — which might be as dangerous as anything they faced in the countries they fled from — as the “reward” for those judged to be genuine refugees.

This isn’t a coherent policy. Its logical endpoint is that detainees will either give up and return to their countries of origin (which so far shows little sign of happening), kill themselves in detention or be killed by angry locals. Under the current policy, there is no rational path forward other than those options. For a policy founded on the alleged need to stop asylum seekers dying on the voyage to Australia, it makes no sense. And the results — violence, hunger strikes, self-harm — will continue at a greater or lesser tempo while it is in place.

Thanks Bernard for grappling with the complexity of the issue.
I feel there is no simple solution, but the “Malaysian Solution” is the best suggestion so far. No matter how unpleasant life is for asylum seekers in Malaysia, surely it is preferable that 800 people suffer it rather than 2000 (I assume the Malaysians would have been happy to roll over the numbers for more arrivals).

I have always wondered why we should turn away brave, well-resourced and often well-educated boat people. Surely such dynamism is just what we need to boost our economy.

As usual, a well argued and balanced piece from Mr. Keane. However, I would part company with you on one point: the idea that offshore processing under either of the major parties was ever about stopping people dying at sea. At best, the excuse that this was about saving lives was only ever put forward to fend off accusations that the government of the day was pandering to the shock jocks.
The Coalition’s stress from the outset and to this day has been on border protection – playing on fears of dark-skinned hordes storming our shores. The renaming of the immigration bureaucracy, first to the Dept of Immigration and Border Protection (removing reference to the idea of immigrants aspiring to citizenship) and then to the totally militarised nomenclature of the Australian Border Force is evidence aplenty that this government’s focus is on highlighting the outsiderness & otherness of refugees.
The Labor Party, while not as enthusiastic about overtly demonising refugees (with the possible exception of the loud dogwhistling from Bob Carr), only reintroduced offshore processing not to save lives but as as act of desparation to get boats and refugees off the political agenda. Rather than defusing the issue all Labor succeeded in doing was pushing Abbott & Morrison into further displays of bastardry to the right in what has long been an unseemly contest of cruelty.
This has NEVER EVER been about saving lives.

Stopping the boats was never about saving lives at sea, but all about focus groups. Let’s be honest, whatever the post-facto justifications now are. And the boats haven’t been stopped at all, they’ve just be re-directed elsewhere. There is zero evidence that this policy is stopping asylum seekers fleeing their own countries. The logical conclusion is that its fine for them to take risky boat journeys elsewhere, just not here where our shock jocks can see them. Lets face it, Australia is now running its own system of Gulag-lite. Think about if we had have pursued this policy in the 70’s post Vietnam. Why was it alright then to have boat people and not now?