Voters oppose an increase in Australia's role in Iraq, and the ABC is the country's most trusted institution, Essential Report shows.

Voters are split between Australia keeping its current military commitment to Iraq and pulling out of the country, with little support for the government’s flagged “deepening co-operation” with Iraq the war against Islamic State, today’s Essential Report shows.

During Prime Minister Tony Abbott’s summer break visit to Iraq, he said he intended to “deepen our co-operation” with the Iraqi government against Islamic State. But only 11% of voters support any increase in Australia’s military commitment to Iraq, which already involves aircraft and special forces troops. Some 37% of voters support retaining our current commitment, but 34% want all Australian forces withdrawn from Iraq.

Only 11% of voters support any increase in our military role — and they’re mostly men, with men and women splitting 15%-7% respectively on the issue.

Meantime, the ABC is the country’s most trusted major institution despite an ongoing campaign by the Coalition and News Corporation to undermine it. Some 53% of voters say they have some or a lot of trust in the ABC, the same level of trust as the High Court, although 20% say they have a lot of trust in the ABC, compared to 17% for the High Court. That compares to 54% for the ABC and 57% for the High Court in July 2013. The Reserve Bank continues to be the third most trusted institution, on 49%. At the other end, the least trusted institutions are political parties (14%), religious organisations (22%), business groups and trade unions (23%). 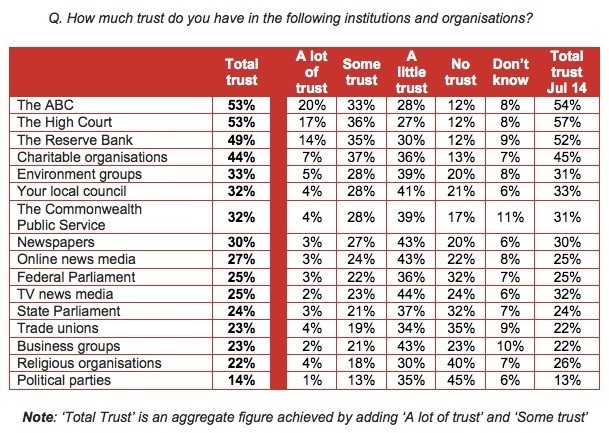 On voting intention, the Coalition and Labor are each on 40%, the Greens are on 10% and the Palmer United Party is on 2%, for a two-party preferred outcome of 53%-47% in Labor’s favour.

But there are noticeable differences between men and women. Women (72%)  use Facebook more often than men (65%) at least once a week; men (22%) use Twitter at least once a week nearly nearly twice as much as women (12%); women use Pinterest more than twice as much as men, 18% to 8%. Use of Facebook declines with age; Twitter is primarily a young person’s medium (29% aged 18-34 use it at least once a week; only 4% aged over 55 do so, which may explain why The Australian is always attacking Twitter); so too is Instagram and Pinterest, while LinkedIn is used more by 35- to 54-year-olds. But 80% of voters agree that “most people spend too much time on social media at the expense of other activities”.

I thought the reason why the Australian is always attacking Twitter is because a certain Rupert Murdoch posts there so often.

Given the trust ascribed to the High Court & the ABC, can we expect Their Honours to have their funding cut?

Australians are horribly misinformed about Iraq by Mainstream journalist, politician and academic presstitutes, including those of the ABC which ahs a n appalling record of censorship and lying by omission.

Thus, by way of example, Lesley Stahl (born December 16, 1941, a Jewish American television journalist and long-time reporter for CBS) famously asked Jewish American former Secretary of State (1997-2001) Madeleine Albright on “60 Minutes” in 1996: “We have heard that half a million children have died. I mean, that’s more children than died in Hiroshima. And, you know, is the price worth it?” and the disgusting Albright notoriously replied “we think the price is worth it” (see Lesley Stahl and Madeleine Albright quoted in “Madeleine Albright”, Wikipedia: http://en.wikipedia.org/wiki/Madeleine_Albright ).

I would love to be informed otherwise, but to my knowledge not one Australian Mainstream journalist, male or female, has asked the same question of Australian public figures in the period 1990 to the present – what a pack of holocaust-ignoring, genocide-ignoring presstitutes, although 2 very honourable exceptions are (1) the ABC Science Unit’s Robin Williams who permitted me to make an ABC Ockham’s Razor broadcast entitled “Australian complicity in Iraq mass mortality”(ABC Radio National, 28 August 2005: http://www.abc.net.au/radionational/programs/ockhamsrazor/australian-complicity-in-iraq-mass-mortality/3369002#transcript ) and published my address in a chapter with the same title in a book “Lies, Deep Fries & Statistics” (edited by Robyn Williams, ABC Books, Sydney, 2007) and (2) the late Dr Peter Pockley of “Australasian Science” who published related estimates by me of Iraqi deaths (see Gideon Polya, Australasian Science, June 2004, p43).

Iraqi deaths since 1990 from violence (1.7 million) or from violently-imposed deprivation (2.9 million) total 4.6 million, about half of them CHILDREN. 1990-2011 Iraqi under-5 infant deaths total 2 million, 90% avoidable and due to gross violation of the Geneva Convention by the war criminal US Alliance, including Australia (for details and documentation see “Iraqi Holocaust Iraqi Genocide”: https://sites.google.com/site/iraqiholocaustiraqigenocide/ ).

To my knowledge, Senator Lyn Alison (Australian Democrat, Victoria) and Kelvin Thompson (Labor MP, Victoria, former Labor Shadow Attorney General but put on the backbench by the pro-war, pro-Zionist, US lackey Labor Right) are the only Australian MPs to have asked how many people we had killed in Iraq; Senator John Faulkner (Labor, NSW), another a decent human being, informed me that he had raised the matter in Senate Committee.