Manus Island — detainees collapse, scared of violence. Pictures and reports out of the Manus Island detention centre over the weekend have become increasingly disturbing, with reports that detainees have been told that special forces will enter the camp later today “to deal with you”. There are reports coming from the camp that Transfield officers have rounded up the leaders of the protest and placed them in the Chauka isolation unit. The Refugee Action Collective says that Transfield’s “riot squad” attempted to enter the Delta Compound of the camp on Saturday, and asylum seekers have boarded up areas to prevent their protest being broken up. Up to 700 detainees have joined the hunger strike, with more than 200 taken to the medical compound for treatment. The strike has been going for a week, as asylum seekers try to prevent the transfer of refugees to the Lorengau settlement, also on Manus Island, on Thursday. 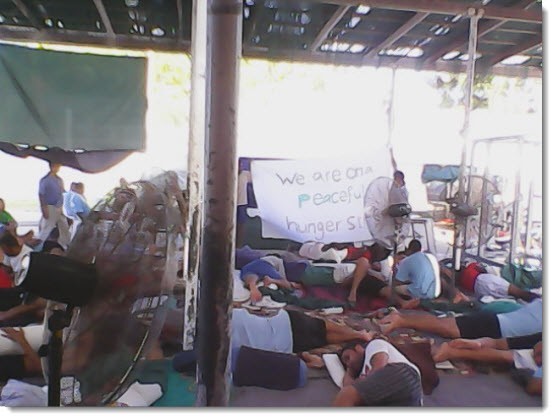 Friends in high places. When Clare Masters moved from The Daily Telegraph to New South Wales Premier Mike Baird’s office as media adviser and speechwriter in May last year, it seems she did not forget where she came from. Sydney Morning Herald staffers swear the former Tele strategic news editor is favouring Holt Street with drops. “The SMH‘s least-favourite person,” one SMH journo told us recently. It’s tough for Fairfax, with conservative governments in power in both Canberra and Sydney. Fairfax’s political bureau was suffering from a similar access problem last year. But maybe they’ll have a fresh start with the PM’s newest media adviser; former ABC political journo Mark Simkin starts working for Abbott today.

Lambie talks north, heads south. We love it when politicians decide to get creative in the way they communicate with voters, and while using YouTube isn’t exactly groundbreaking, it is new for independent Senator Jacqui Lambie. Lambie decided to use her YouTube debut to take aim at Prime Minister Tony Abbott and the Queensland government, urging voters to put the LNP last on their ballot papers. Including some terrifying close-ups of photos from Lambie’s glossy women’s mag spread, the clip starts with the promising line, “Because I’m an independent senator for Tasmania, and I always try to put Tasmania first, I wouldn’t ordinarily involve myself in another state’s election”. Of course, Lambie goes on to get herself involved in another state’s election, as well as implying that the government is “giving away” too much foreign aid. She urges Queenslanders to put the LNP last and “if you want to kick Tony Abbott and his Liberal National mates in the shins … or a little bit higher … over the way they are treating our Defence families, then make your vote count in the Queensland state election”. That’s a low blow, Jacqui — keep it above the belt.

Pun Appreciation Club. Also in Queensland, Ms Tips was very pleased to receive this press release from the independent candidate for the seat of Ferny Grove, “Independent Candidate is Gittin’ Down to Business”. Ferny Hills local Dianne Gittins is promising to support the arts and music.

No business like showbusiness. In most industries, starting an office punch-up with an underling is a surefire way to get sacked. But not at Channel Seven, where Mark Llewellyn went from being kept on as a “consultant” of some variety to now being executive producer for the network’s pivotal (and expensive) Sydney siege special. He was in The Australian over the weekend spruiking the interviews, suggesting Seven has no intention of keeping him in the background. It’s an astonishingly quick career turnaround for a man who, only three months ago, was suspended from his role atop the high-profile Sunday Night for physically abusing one of his staff.

Fresh angle on F-35s. It’s summer time, so we can’t expect fresh media stories every day. But amid the usual January staples of shark attacks and summer sales (can anyone ever recall a January where retailers haven’t declared a great sales season, no matter how poor the retail sales data later shows it to be?), Fairfax made a special effort this morning, reporting that “China stole plans for a new fighter plane”. The breathtaking revelations from Philip Dorling about how Chinese hackers had acquired some limited information about flying (well, sometimes) heap of crap the F-35, based on Edward Snowden documents released by Der Spiegel on the weekend, have long been known — they were reported as long as nearly five years ago and reported locally in 2013 after a Washington Post article. The Snowden documents are fascinating for their revelations about the systematic hacking and computer theft programs run by the Five Eyes spy agencies. Too bad Fairfax thought it needed a wholly redundant local angle to cover them. As for the allegedly “stolen” F-35 plans, surely we’ll be hoping the Chinese have the lot and copy this multibillion-dollar disaster — which can’t even shoot to defend itself until 2019 …

Lunch watch. An eagle-eyed tipster sent us this for the lunch watch files on Friday afternoon:

We asked Brown if he had had coffee with Michelson, not wanting to have a Rear Window-style lunch mix up, but didn’t hear back by deadline. Of course, if you see any interesting tete-a-tetes, let us know.

Now make a wish. Next month Crikey celebrates its 15th birthday (cake welcome!), and we are very excited about the occasion. We’ve got quite a few events and surprises up our sleeves, but as always we think this is an area where we could use some help from our tipsters. We want to hear from you about your favourite moments from 15 years of Tips and Rumours — your favourite story, the best leak, most enraging moment and our most accurate tip-offs (and our least!). Send them here, and as always, you can remain anonymous if you want.

Heard anything that might interest Crikey? Send your tips to [email protected] or use our guaranteed anonymous form.