Why are the share prices both Seven and Nine falling? And other media tidbits of the day.

Not worth the offence: APC. The Australian Press Council has ruled The Sydney Morning Herald breached its press standards by publishing a cartoon that depicted an elderly man with stereotypically Jewish features pointing a remote control at an exploding urban landscape. The cartoon, by Glen Le Lievre, was published on June 26, 2014, to illustrate a Mike Carlton column on the war in Gaza.

At the time of publication, the cartoon, along with its accompanying article, came under heavy criticism, leading the paper to publish a lengthy retraction and apology.

The Press Council welcomed the apology and commended this approach to other publications, but said the cartoon breached standards “because it caused greater offence than was justifiable in the public interest”.

In its adjudication process, the SMH “agreed that the cartoon had placed gratuitous emphasis on the Jewishness of its subject and in doing so had inappropriately emphasised religious persuasion rather than Israeli nationality, thereby causing offence” — a point the publication also made in its apology in August.

The paper’s editorial board in August explained that the cartoon was based on photographs of the conflict, and that Glen Le Lievre often drew the elderly with exaggerated features. Because of this, the SMH argued, its editors had believed the cartoon was not anti-Semitic. However, the paper acknowledged that the cartoon bore a similarity to those circulated in Nazi Germany – “menacing cartoons that continue to haunt and traumatise generations of Jewish people”.

A summary of the Press Council decision was published in the SMH on Saturday. — Myriam Robin

Share prices tumble for Seven and Nine. Channels Seven and Nine have both endured a very weak start to the year as their share prices lag. This is especially grim news for their owners, Seven West Media and Nine Entertainment Co. However, the continuing decline in the share prices of both groups has been overshadowed by the burbling speculation surrounding the struggling Ten Network and the now seemingly eternal toing and froing over whether a takeover bid/deal will ever emerge. The message form investors is that free-to-air TV is on the nose and seen as potential “roadkill” in front of the flood of streaming TV operations starting this year (aka Netflix), even though Seven and Nine have moved to position themselves in this sector ahead of Netflix’s start.

There’s growing speculation that Seven West Media’s board may have to make a decision on whether to impair the value of the company’s TV assets if earnings are as weak as CEO Tim Worner suggested they would be at the AGM late last year. Of greater interest, though, is whether the 40%-plus slide in Seven West Media’s share price in the past six months or so will force the Seven Group Holdings board (Kerry Stokes controls both companies) to write down the value of the 35% Seven West’s stake held by Seven Group. That will be on top of consideration by Seven Group whether to impair the value of its WesTrac Caterpillar distribution businesses in China and Australia (especially Western Australia and New South Wales).

After holding up well as the Seven West share price fell, Nine shares joined the slide in early January. For Nine Entertainment Co, the sharp fall in the company’s shares this year saw a new all-time low of $1.67 hit late last week.

The boards of both companies may decide to wait to the end of the financial year in June to make a decision on any impairment, especially as Seven West says it will still make its earnings guidance for the full year. But the share price isn’t signalling that confidence at the moment — and hasn’t been for two months. Let’s hope their much ballyhooed 2015 TV ratings battle, kicking off next week, produces some positive news in terms of ratings, revenue and profits for the two companies. — Glenn Dyer

One thing in common: part 2. We had a go at Fairfax when the media company got Nazeem Hussain and Waleed Aly mixed up, so it’s only fair to bring you Vogue‘s stuff-up too.

This from vogue.com — and in case you were wondering, the brown person isn’t, as written, X-Factor contestant Jason Heerah, but man-about-town Shiva Singam. 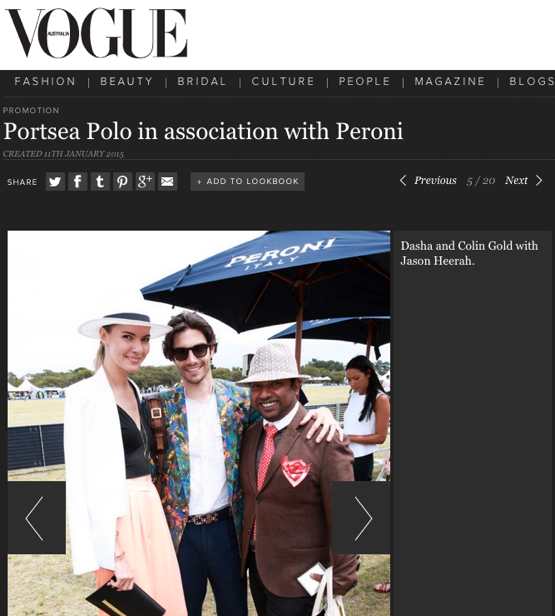 They can’t give it away.  Ten’s independent directors are back at work this week considering the various “offers” (all of which are “non-binding” at this stage and “indicative” only) from the likes of American investor Saban Entertainment, which found a willing ear in today’s Australian Financial Review’s Street Talk column to spruik the merits of its “offer”. The bottom line is that Saban has offered a deal, and the actual per share price is weaker than the 23 cents put on the table by Discovery and Foxtel. Talk is that’s a couple of cents a share or more on the light side, but while Foxtel wants to negotiate, Discovery won’t move from the 23 cent price. Ten’s TV production deals with CBS and Fox are believed to contain balloon payments in their final years, which mean there are some rather large financial potholes contained in the accounts, but not readily apparent to ordinary investors. (Opaque accounts at a media company? And one connected to the Murdoch clan, no less? Well, I never …).

The move late last week by the Australian Competition and Consumer Commission to probe the proposed merger of Fairfax Media’s radio business with that of Macquarie Radio (which will produce dominance in the AM talk markets in Sydney and Brisbane) could give us a guide as to the commission’s view of any move by Foxtel to help in acquiring control of Ten. All this chat and speculation has allowed the remorseless slide in the Seven West Media share price to go unremarked, except for Crikey’s reporting in late November and December. The Seven price hit an all-time low before Christmas of $1.225 a share. That’s despite Seven and Foxtel pushing to “go” button on their streaming joint venture called Presto. — Glenn Dyer

Disney CEO’s package bigger than Rupert’s. Rupert Murdoch is no longer the fattest of fat cats running a listed US media company. Well, sort of …

Murdoch’s earnings of US$29.5 million for running 21st Century Fox in the year to last June, and the further US$8.7 million for turning up at News Corp board meetings — and the apology of an annual meeting last November — may sound like a lot, but it has been dwarfed by loot shovelled the way of Walt Disney Company CEO Bob Iger for the year to September 27 (Disney’s financial year end). It is the third year in a row that Iger’s total package has been fatter than Rupert Murdoch’s.

Iger made a total of US$46.5 million in 2014, according to the company proxy statement for the forthcoming annual meeting in March.

Claiming Iger “has driven spectacular financial performance and created significant shareholder value,” Disney’s board detailed the CEO’s payments in the proxy statement released Friday night. Iger’s $46.5 million consisted of a US$2.5 million “basic” salary, US$8.9 million in stock awards, US$8.3 million in option awards, US$22.8 million in non-equity incentives (i.e. a cash bonus), US$2.8 million change in pension value, and US$1.1 million in other compensation. That last category includes US$391,411 for personal air travel and US$614,582 for security.

Late last year, Disney extended Iger’s contract from 2016 to 2018, and he could earn a US$60 million bonus if the company outgrows its rivals. But as large as this package is (and the more than US$120 million paid to him over the past three years isn’t to be sneezed at), he has little equity in the Walt Disney Co, unlike Rupert Murdoch and his family, which dominate Fox and News with around 14% of the total issued shares, through their 38% stake in the controlling voting shares in both companies. — Glenn Dyer

Video of the day. Has the White House lured the cast of The West Wing together to promote its annual Big Block of Cheese Day? You feta believe it … 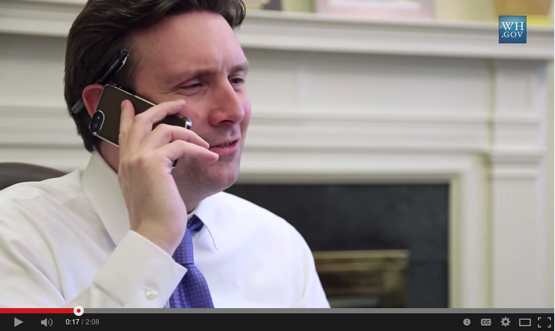 I think we all got a good laugh on the weekend about seeing such a tame cartoon get slapped down by the Press Council, amidst all the ‘Je Suis Charlie’ and Hebdo cartoons Fairfax was running.

I’m a little confused about some of the ruling though – “A linkage with Israeli nationality might have been justifiable in the public interest, despite being likely to cause offence. But the same cannot be said of the implied linkage with the Jewish faith that arose from inclusion of the kippah and the Star of David.”

So, it would have been okay to make it clear the old man was Israeli, but in this case it wasn’t because the cartoon linked him to the Jewish faith?
Ok… but the Press Council equates using the symbol from the Israeli national flag as drawing links to the man’s religion… So that means whilst symbols from other flags can be used to as shorthand to identify nationality, Israel is exempt? It’s ok to criticize Israel, but it’s antisemitic to use their flag whilst doing so?

Share prices tumble for Seven and Nine; now that is good news.