Birdman flies crazily, soaring on wings of pretension and pathos

To many, Michael Keaton is a barely-remembered former Batman, or the eponymous ghoul in Beetlejuice -- the perfect choice to play a washed-up actor with a habit of playing superheroes. 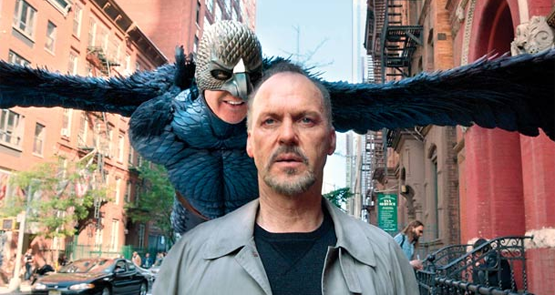 In the fickle and forgetful minds of the general public, Michael Keaton is a vague memory: a has-been who starred in some movies they can’t quite remember then played Batman a couple of times before disappearing into the shadows for real. Keaton was so wildly transformative as the eponymous statuette-sized ghoul in 1988’s Beetlejuice — hyper-powered and deliriously ghastly, decked out in a pin-striped Halloween suit with Fright Night makeup that made him virtually unrecognisable — that the actor’s most monstrously entertaining performance is barely even remembered as his.

This adds to the meta-meaning of Mexican-born filmmaker Alejandro Gonzalez Inarritu’s angsty comedy about a fading celebrity desperate to reclaim the spotlight. Birdman has brought Keaton back to public consciousness (he won a Golden Globe this week and is in the running for an Academy Award) for his starring role as Riggan Thomson, a washed-up actor most famous for playing a winged superhero.

How much of the film was hooked on his performance? Was the entire thing ret-conned from the casting coach backward? These are questions Inarritu wants you to ask. No doubt he’s already responded time and time again that Keaton was essential to the project, he was the very heart and soul of it, we couldn’t have done it without Mike, a yada yada.

But the most surprising thing about Birdman — its full title is Birdman or (The Unexpected Virtue of Ignorance) — is not the film’s real-life connections with Keaton but that he seems oddly incidental to the structure of it. Any number of male actors past their peak of fame could have been plucked for the role — Kevin Costner, say, or Chevy Chase, or Steve Martin, or hell, even Pauly Shore — if the film were intent on pursuing that level of meta-ness.

Turns out it was, and the casting of Keaton was one of several gimmicks Inarritu deploys with the zeal of an underground theatre director who somehow stumbled into the big time. There’s the seemingly continuous take the film is framed with, though the story transpires over several days. There’s the drum score you hear, then the drummer you see banging out the rat-tat-tat, breaking the fourth wall. There’s countless self-conscious moments where a character says something along the lines of “hey, a replacement actor isn’t likely to come knocking on the door”,  then knock knock, da-da! — someone’s at the door.

“This is the theatre, don’t be so self-conscious,” says a puffed-up prima donna played by Ed Norton and, well, indeed. The self-conscious elements rule the film out as a serious consideration of behind-the-scenes theatre; its tone is anything but improvised. Birdman is, however, a striking ode to performance in many forms. The backdrop is a story that follows a protagonist haunted by a previous role, who literally hears a superhero character whisper dangerous nothings into his ears, taunting him to do strange things and act on sudden impulses.

The film is calibrated so it too seems to be acting. It plays like a perverse performance piece, unhinged and stagey, lathered with self-reflexive smugness. The pretentious manner Birdman correlates internal and external realities becomes almost embarrassing when the film detours to take shots at a New York Times theatre critic, with two key characters defending their honour to sledge the grump with the poison pen.

That kind of faux criticism, which has Keaton haranguing the critic about laziness and lack of structure, might mean something coming from oft-derided directors such as the Farrelly Brothers or M. Night Shyamalan (who literally fed a critic to the dogs in his maligned Lady in the Water), but from a lauded darling like Inarritu (whose films include 21 Grams and Babel), it feels weird and pointless. Or perhaps it is the filmmaker’s most authentic meta-moment: an admission that Birdman, while littered with pleasures and oddities (including wonderful cinematography and Keaton’s enormously entertaining performance) is also a little lazy and structureless, too.

“You’re kind of a great mess. Like a candle burning on both ends, but it’s beautiful,” says Mike (Norton) to Riggan’s stoner daughter (Emma Stone) in a moment that’s sort of sleazy and sort of romantic. The same could be said of the film. When Riggan is locked out of his own play, forced to return to stage in his underwear walking through crowds and into the auditorium, you can sense more than his own desperation at work. The entire film has been designed for audiences to either love it or notice it. What better description can apply to vain thespians?

When Keating delivers dialogue of the sad and self-conscious sort, along the lines of how his life risks being remembered via a Trivial Pursuit question, those moments get extra pathos. That’s a value add-on, part of the deal, a boost you get when you hire a certain actor at a certain time in his  career. And, ultimately, another wonky contrivance in a film oozing with them. Birdman is a strange, colourful, self-sabotaging, pretentious, entertaining water-cooler mess. Hate it and you ignore such obvious talent so boldly harnessed; love it and you indulge in delirious narcissism.

It says something of Inarritu’s chutzpah that he thought he could make a wacky film about the stage and get away with moments of pseudo-intellectual student theatre, the worst of them when Keaton walks past a Shakespeare-reciting drongo on the street hollering about a tale full of sound and fury signifying nothing. Going by the mountain of goodwill the film has received, including nine Academy Award nominations, he was right.