Victorian Labor staffing rules ... unions get involved in Queensland ... and Crikey could win you a million ...

Starting on the wrong foot. The new Victorian government is wasting no time in alienating its own, according to this tipster:

“Have heard grumbles from many Labor staffers in Victoria over staff selection following last year’s election. Apparently Victorian Labor head office, possibly with the agreement or acquiescence of Daniel Andrews, sacked all existing staffers and then gave MPs a limited selection of names for them to choose from. Problem being that many MPs had never heard of these candidates, having been chosen by the head office apparatchiks, and positions were still on offer, with ‘interviews’ taking place despite MPs having no ability to override head office’s shortlist. It’s apparently not a matter of merit-based selection either. Staff with years of experience under Bracks and Brumby (even Chiefs of Staff) were excluded from the shortlists, and complaining MPs have been told that there’s nothing they can do to get their preferred staff back on the list (certainly without risking political retribution somewhere down the line). What is going on in Victorian Labor?”

Of unions and postal votes. Our Queensland-based tipsters have been keeping us in the loop across the state, with this from a constituent in Ashgrove:

“I’m in Campbell Newman’s electorate and [my] mother-in-law is in Saxon Rice’s. My husband and I have received three of these postal votes and mother-in-law one with reply paid envelope to PVA. We receive something from Newman everyday and I’ve even had an email.”

We’ve heard from multiple tipsters that the LNP is pushing postal vote information in all corners. Voters who reply with the envelope provided send their details to the party before they are passed on to the electoral commission.We also hear from another tipster that those ratbag unionists are targeting the LNP in Queensland, just as they targeted the Coalition government in Victoria last year. We wonder if it will have the same effect. 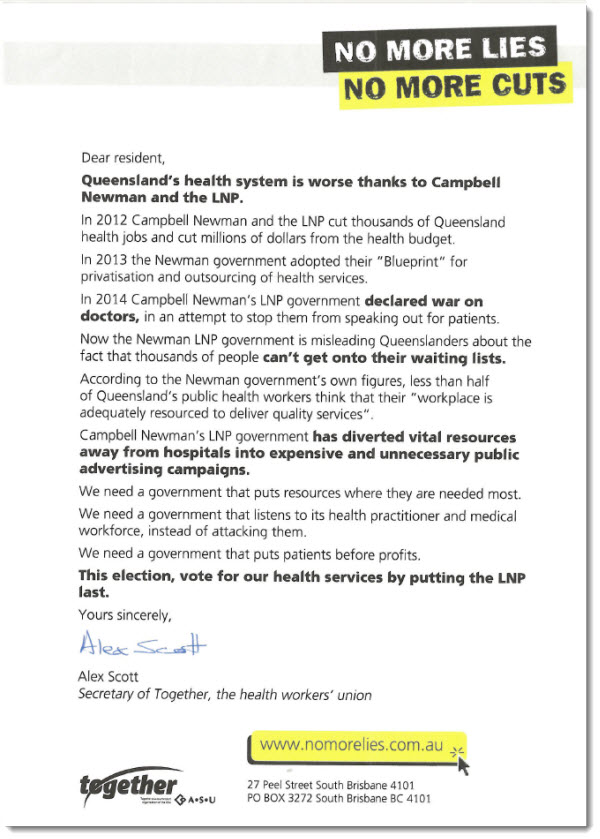 Dinner discussions? Maybe not. This from a tipster at one of Melbourne’s nicer restaurants:

We called Oquist who told us that he wasn’t in Melbourne at all, but back at work at the Australia Institute in Canberra — maybe our tipster was mistaken, or just hoped he saw Oquist and Hanson-Young. Seen any interesting dinner pairings? You know what to do.

Join in the chorus. The Australia Day Council announced today that in a new attempt to make us remember that Australia Day isn’t just a day off work, the entire nation will be encouraged to patriotically turn off Triple J and pause barbecuing to sing the national anthem at midday — in unison. To say this is an ambitious aim is quite the understatement, and some reports suggest the rendition will include the mythical second verse. While Ms Tips was made to sing it in primary school, we imagine many will struggle with the words.

Lock it in, Eddie. You know you’ve really made it when you appear in a question on Millionaire Hot Seat, as Crikey did last night. This contestant obviously isn’t as informed about Australian politics, business and media as you all are — and it cost him dearly. 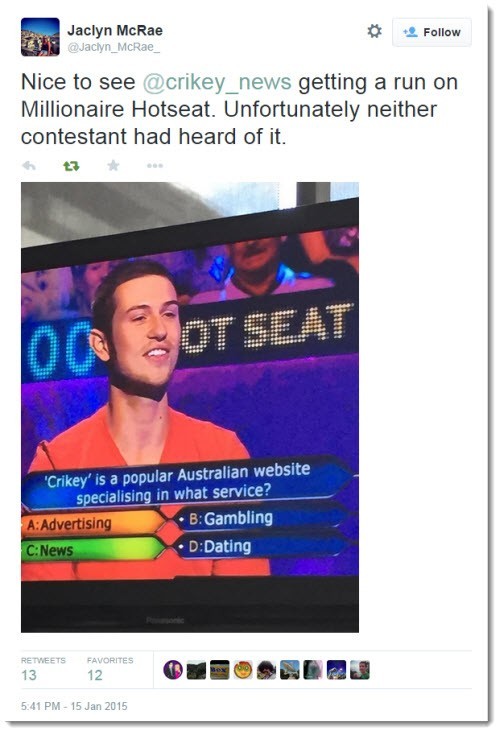 A bridge too far. The Perth Writers Festival has announced its major draw cards for next month’s festival, including author Hilary Mantel, the only woman to win the Man Booker Prize twice. Unfortunately for anyone hoping to rub shoulders with Mantel, she won’t actually be physically there — Mantel doesn’t travel and will be appearing via video link. It’s a shame, we hear Perth is beautiful at this time of year.

Building blocks. The Academy Award nominees were announced overnight, with many outraged that The Lego Movie missed out on a mention for best animated feature. Director Phil Lord took a creative approach, tweeting this in response: 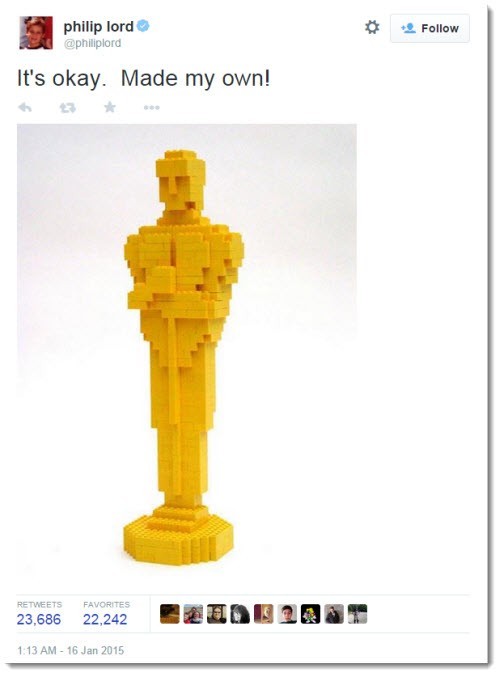 Surely the reported staff selection policies of the new Labor Government in Victoria are what one should expect? Long gone are the days when Labor staffers were chosen on anything other than strengthening the positions of the various ‘factional’ Powerbrokers?

I’ve just discovered that I can’t even manage the first word of the national anthem, let alone the second verse. Also ‘for we are young and free’ definitely does not apply to me, being no longer young and certainly being very very expensive, requiring a lot to cause me to get up in the morning.

“We’ve heard from multiple tipsters that the LNP is pushing postal vote information in all corners. Voters who reply with the envelope provided send their details to the party before they are passed on to the electoral commission…”

There used to be a Public Service acronym TIFI (never used in front of, nor explained to, the punters) which would seem appropriate “Tell ‘Im F**k ‘Im”

Miowarra, at the risk of shocking you, all Parties send out this material. Not all public servants by the way had, or have, the contemptuous attitude towards the public to which you appear to subscribe.