New data shows Sydneysiders are making fewer trips by car. One possible explanation is they’re increasingly using the internet for routine personal and work-related business tasks instead of driving. 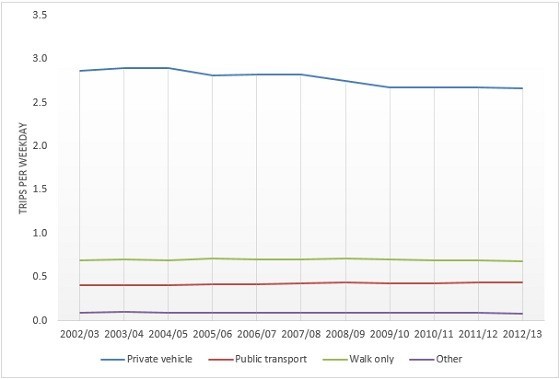 The image above shows the change in per capita trips in greater Sydney over the 10 year period from 2002/3 to 2012/13. It’s based on data collected by the NSW Bureau of Transport Statistics for its annual household travel survey.

It’s consistent with the now-familiar understanding that per capita travel by car is gradually falling in cities in many developed countries. The average number of car trips made on a weekday by a typical Sydneysider declined from 2.9 10 years ago to 2.7 in 2012/13.

This isn’t because the average Sydneysider is instead making heaps more trips by train, bus, light rail or ferry; nor is she substituting walking and cycling for driving. The average number of trips per person made by these other modes didn’t change a lot over the period. Weekday trips per person by public transport increased from 0.41 in 2002/3 to 0.44 in 2012/13; walking declined from 0.69 to 0.68; the Other category (mainly taxis and bicycles) from 0.09 to 0.08, and driving from 2.87 to 2.67.

It’s because cars are becoming less useful for Sydney residents. And because the car is still by far the dominant mode (it accounted for 69% of all trips in 2012/13 compared to 11.4% by public transport), that means the average Sydneysider is making fewer trips per day in total i.e. by all modes.

As I’ve discussed before, there are many possible explanations for the decline in driving. However, what’s especially interesting in Sydney’s case is that other data collected by the Bureau suggests that improvements in communications — especially the internet — might be a key reason.

As shown in the image below, the number of per capita weekday trips made by Sydneysiders fell sharply over the last 10 years in two categories: “personal business trips” and “work-related business trips”. In the former category the fall was -32%, and in the latter it was -46%. 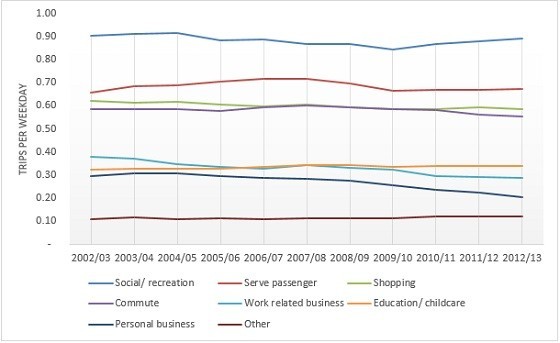 That’s consistent with the theory that businesses are increasingly able to substitute electronic communication for the sorts of routine transactions that hitherto required travelling in often-congested traffic to make face-to-face contact. Banking is a prime example.

These are only two of eight trip purposes counted by the Bureau and they’re by no means the largest ones. But they don’t need to be; the overall decline in trip-making by car is relatively small.

Driving is still a long way from the end of the road in Sydney; it’s just leaving the garage. While per capita trip rates by car are declining gradually, the total number of weekday trips nevertheless increased in absolute terms from 11.6 billion in 2002/3 to 12.1 billion in 2012/13; it’s just that the population has grown faster.

So the decline in (per capita) driving isn’t about to lead to a reduction in traffic congestion any time soon unless Sydney’s population stops growing. If the NSW government wants to do something about congestion it’ll have to take action itself; there are plenty of good ideas it could pursue. Congestion pricing should be top of the list.