Disaffected voters in regional Queensland will be spoiled for choice this election with a rabid PUP, resurgent One Nation and an increasingly worried Katter. 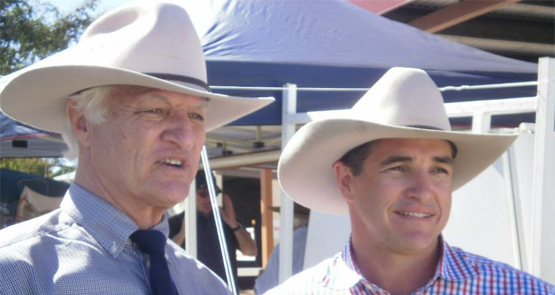 Queensland elections are never lacking for local colour, much of it provided by candidates from outside the umbrella of the major parties.

As such, it is always fascinating to see who the democratic process has brought out of the woodwork when nominations close three weeks out from polling day, and this week’s declaration did not disappoint.

On the face of it, the election seems to present ideal conditions for minor-party and independent candidates to ride to glory on the back of erstwhile Nationals voters who find themselves estranged from a Liberal National Party geared to the reality of state elections being won and lost in the urban south-east.

At the first election held after the LNP merger in 2008, the party maintained a rural face in the person of Lawrence Springborg, who had led the Nationals to defeat in 2004 and 2006.

Despite the teething problems that attended the merger process, regional voters who had served up the One Nation revolt a decade earlier largely stayed on board. But in the decisive seats around Brisbane, Springborg singularly failed to bring home the bacon, allowing Labor under Anna Bligh to eke out a final term in office.

The LNP then underwent an urban makeover under the leadership of Campbell Newman, encouraging Bob Katter in his endeavour to drive a wedge into the party’s exposed regional flank through the establishment of Katter’s Australian Party.

The KAP’s 11.5% share of the statewide vote in 2012 would ordinarily have seemed an outstanding result, but such was the impact of the LNP steamroller that it elicited a meagre haul of two seats, one of which it held already by virtue of Dalrymple MP Shane Knuth’s earlier defection from the LNP.

Since then, the Newman government has burned through a dangerous amount of political capital in its short time in office, and not done a great deal to mollify the regions in going about it.

The old hands of the traditional Nationals strongholds in western Queensland have gone under-represented on Newman’s front bench, with the exception of Deputy Premier Jeff Seeney, who had been one of the key instigators of the Newman ascendancy.

Not all of Seeney’s erstwhile Nationals colleagues were duly mollified by his seniority, with Warrego MP Howard Hobbs rather extravagantly proclaiming him “the most hated man in the bush”.

It was on the basis of such discontent that another rural MP, Ray Hopper, abandoned the LNP in late 2012 to throw in his lot with the KAP, which accordingly gained itself a third seat.

Katter’s party has since suffered a blow to its confidence in the form of a disappointing result at the 2013 federal election, when its statewide vote plummeted to 3.8%, and even Katter himself struggled to retain his seat of Kennedy.

The form slump was largely down to competition from a rampant Palmer United Party, notwithstanding that Clive Palmer himself was not cut from the cloth of Queensland’s distinctive strain of rural politics, and had made his pitch at a broadly conceived middle Australia.

The KAP has considerably scaled back its operations, to the extent of fielding only 11 candidates compared with 76 in 2012. However, it may be that in doing so it is picking its fights more judiciously.

Its most intriguing gambit is Ray Hopper’s move from his existing electorate of Condamine to neighbouring Nanango, leaving Condamine to be contested by his son, Ben Hopper.

Dynastic succession is also at the heart of the PUP’s gambit in enlisting John Bjelke-Petersen to pursue his late father’s line of work by running against Jeff Seeney in his electorate of Callide.

Bjelke-Petersen has been designated as the party’s state leader, but his past record does not inspire confidence. After trying and failing with the Nationals and then the LNP on the family’s home turf of Nanango in 2006 and 2009, he made his first run with the PUP in the interior Queensland seat of Maranoa at the 2013 federal election, but could only manage third place with 13.9% of the vote.

Further crowding the field is One Nation, which is running its biggest complement of candidates since the tail end of its glory days in 2004 — most notably in the rural south-eastern electorate of Lockyer, to be contested by Pauline Hanson herself.

Another noteworthy candidate for the party is Jeff Knuth, who was among the 11 members elected as part of its stunning performance in 1998. Knuth quit the party barely eight months later, and attempted a comeback in 2012 as part of Katter’s Australian Party (which as noted counts among its MPs Shane Knuth, his brother).

However, Knuth would appear to have made life difficult for himself by contesting the seat of Thuringowa rather than his established stamping ground of Burdekin.

If Knuth can be regarded as the respectable face of One Nation, the party has kept its reputation for flakiness intact in the seat of Townsville by fielding Leanne Rissman, a police constable who made headlines last year for unsympathetic comments left on a Facebook page campaigning against Aboriginal deaths in custody.

At the risk of unfairly holding a man to account for the follies of a long-spent youth, it is also interesting to observe that Dan van Blarcom, who was disendorsed as Nationals candidate in 2004 when it emerged he had been involved in neo-fascist groups during the 1970s, is running as an independent in Whitsunday.

Ultimately, the proliferation of alternatives for disaffected regional voters limits the prospects of a significantly expanded crossbench, thanks in large part to an optional preferential voting system that increasingly operates as de facto first-past-the-post, thereby reducing the opportunity for minor parties and independents to snowball their way to victory off each other’s preferences.

Amid a worrying overall picture, that at least is something Campbell Newman can feel grateful about.

Do realities always matter? The infamous perversion of the Qld Deaths in Custody Report comes to mind. How many voters[despite the Commission’s repeated efforts to have the ‘progressive’ media report the findings accurately] know that the Enquiry found aborigines had NOT died in custody at as high a rate as had whites?
Perhaps one day Crikey will expose that scam?

And then there is the charming incident of Cameron Doomadgee’s death, the cover up and then whitewash of his killing, and the promotion of the police officer most directly responsible for his death. Disgraceful realities that certainly matter, despite efforts to hide and ignore them.

Gavin, the relevance is how events in Qld, even when clear cut have been incredibly misinterpreted by the P.C. journalists. It happens outside Qld of course, as shown by the lies peddled about a non-existent police chase of the indigenous lad who died in a Redfern cycling accident.
I see you aren’t fully aware even of the facts re Cameron Doomadgee’s death, which highlights the difficulty there will be in ever reaching intellectually rigorous assessments of even more complex issues.

Gavin, on reflection mea culpa, and I should have stuck more closely to the topic. In future I shall try to not emulate the example of irrelevancies unfortunately set by too many posters — and authors of articles too?

Norman, as far as irrelevancies go you’re in a class of your own.