Premier Campbell Newman prepares for his manifesto launch on Sunday while Labor waits, ready to pounce. 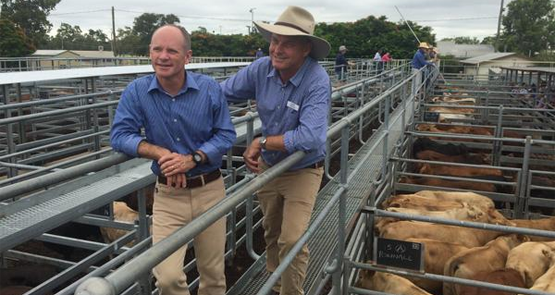 Premier Campbell Newman will unveil his election manifesto on Sunday at an extravaganza aimed at convincing Queenslanders that there is some actual cold XXXX beer beneath the froth of his first term in office.

At a still undisclosed venue Newman is expected to be joined on stage by Prime Minister Tony Abbott, who will be smuggled into Brisbane behind a shield of armed police and VIP security guards.

Newman is declaring his policy hand 13 days out from the snap election, the first January election since Tasmanians went to the polls on January 23, 1913.

Meanwhile, Labor is watching from the wings, saying nothing and planning its 11th-hour ambush.

Newman’s January 31 poll is shaping up as a deadly contest of two strategies: the LNP’s plan to hive off public assets to raise $38 billion to pay down debt and build infrastructure, and Labor’s still-to-be-announced program, which will be to promise very little — i.e. only what the state can afford.

Voters will then have to decide whether they want the LNP’s grandiose “bells and whistles” or Labor’s meat pie in the saloon bar.

The LNP has been fastidious in its manifesto development, organising a full-scale economic review in 2014 as well as state-wide public meetings to test community ideas.

Its main point of attack is Queensland’s rising debt that is now estimated to be about $80 billion. The cost of servicing the debt is $4 billion a year.

It is an economic approach from the handbook of Federal Treasurer Joe Hockey and UK Chancellor of the Exchequer George Osborne. The aim of the debt “black hole” narrative is to terrify citizens into accepting a policy of service, jobs and welfare cuts and public sell-offs that they would not otherwise consider.

At Sunday’s LNP love-in Newman will try to convince voters of the reality of his $37 billion economic windfall derived from a plan to privatise, oops, “long lease”, port and electricity power assets.

“There is absolutely no doubt we will achieve those amounts,” Newman said during the week. “Every indication is we’ll achieve more. We’re very confident about that.”

Although it has never been independently audited, the plan has received fabulous endorsement from the captains of banking and industry talking to The Australian.

What else would you expect them to say? Unfortunately, many of those quoted, including Maurice Newman — John Howard and Tony Abbott favourite, and former chairman of the ABC and the Australian Stock Exchange — live in NSW and spend their leisure time at the Sydney Cricket Ground members’ lounge.

They know little of Queensland, its history or political culture. Their beady eyes are firmly glued on corporate profits and shareholder dividends for their mates in Sydney and Melbourne.

In the face of collapsing coal and mineral prices (coal has fallen 35%), many of them are simply shutting their eyes and kneeling in prayer.

The LNP and its cheer squad are dismissive of the potential pitfalls as they career into another era of “capitalism on credit” and Sir Joh’s corporate cronyism.

Another part of Newman’s economic equation that is threatening to bring his government undone is the $16 billion Carmichael coal mine in the Galilee Basin, the biggest open-cut and underground coalmine in Australia. The project is being masterminded by India’s Adani group, one of the corporate giants behind last year’s electoral victory for Prime Minister Narendra Modi’s Hindu nationalist party, the BJP.

Where’s the money coming from to finance the project and build the 500-kilometre rail link to the coast? Queensland taxpayers? We aren’t being told.

Newman says the central question of the election is economic management. On Sunday he will have to convince voters his economic “vision” is more than pie in the sky.

Newman’s largely unspoken-about battleground is his Brisbane seat of Ashgrove, where he is regarded as a braggart and busted flush, and Labor’s Kate Jones, the seat’s former MP, is holding her lead over him in the polls.

Labor will have a team of economists, led by former federal treasurer Wayne Swan, poring over Sunday’s LNP figures. The next stage of the election battle — centred on “it’s the economy, stupid” — will decide the outcome.

I thought Abbott was on a security alert no-fly list for Queensland.

One state asset overlooked by the LNP – in reality the most valuable – is The Great Barrier Reef.

Newman can’t sell it – or ‘lease’ it – so the plan is for its hastened demise courtesy of the mining industry. If something can’t be sold or leased it’s no use to Queensland.