How the West can broker a deal with Russia on Ukraine

Years of self-centred Western foreign policy has left Russia disenfranchised. But there is a way forward. 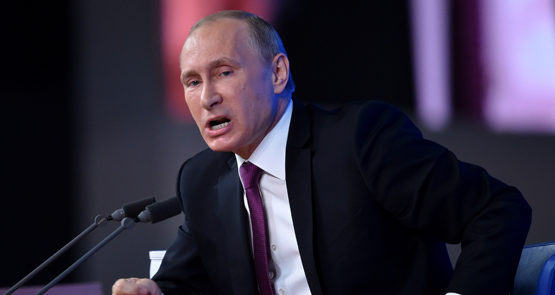 After a relatively quiet couple of months, fighting in eastern Ukraine is again on the rise, with the postponement of a planned peace summit and dire talk of increased Russian involvement with the separatists. Yesterday, the European Parliament called for stronger measures against Russia, including “a communication strategy to counter the Russian propaganda campaign”.

That makes it all the more vital to have some clear thinking on the question of how to deal with Vladimir Putin’s Russia. A good place to start would be with Tom Switzer’s piece in the Fairfax papers on Monday, “Appease Putin and avert a second Cold War”. Most right-leaning commentators, of whom Switzer is certainly one, either demonise Putin, demanding hard-line measures against Russia, or succumb to what Jon Chait calls “conservative dictator-envy”. Switzer, however, is refreshingly free from both, calling instead for “a policy of compromise and accommodation,” which he admits that some would call appeasement.

Switzer comes from the “realist” school of foreign policy — the tradition that, among other things, brought you Henry Kissinger’s escalation of the Vietnam war and Jim Baker’s complicity in the Yugoslav civil war. But idealists have plenty of faults as well, and realism can be a valuable corrective. (Realists were prominent, for example, among the opposition to the US invasion of Iraq.)

In this case, Switzer gives a clear exposition of why the West bears much of the responsibility for the current problems in Ukraine. In the 1990s and early 2000s, when Russia was weak, the West failed to treat it as a serious partner. It remained too much in the mode of Cold War thinking, and “expanded the US security umbrella without taking into account Russian susceptibilities”.

That always made it likely that when Russia, under Putin, recovered its strength, it would be at best a difficult partner. Various other Western missteps, including support for Georgia in the war of 2008 (which from Russia’s point of view was a defensive operation), just increased Russian suspicions. Unfortunately, having once done the wrong thing, it doesn’t follow — in foreign policy or anything else — that now doing (what would have been) the right thing will make everything OK. You have to deal with the situation as it actually is, not as it was at the previous decision point. I call this the “What do we do now?” problem.

Ten or 20 years ago, an inclusive and conciliatory policy towards Russia was the way to go. But it’s not so clear that it’s still viable.

Western policy may have been responsible for creating a bellicose Russian attitude, but that attitude now seems very much self-sustaining. Power has gone to Putin’s head, and his imperialism, although nurtured by real grievances, is not likely to quietly go away if the grievances are removed. So I think Switzer’s call for rapprochement is only part of the story.

We need to accept that a full rapprochement may not be possible, because Putin’s agenda may now include items — such as the permanence of the eastern Ukrainian conflict, and possibly even destabilisation of the Baltic states — that the West cannot possibly accept.

On the other hand, the alternatives are pretty miserable — basically waiting for Putin to fall foul of domestic opposition, which could take a long time — so reconciliation is worth a try. The possibility for a deal is certainly there — with many European countries obviously willing to trade, coupled with an end to sanctions and the recognition of Russian rule in Crimea — for a total Russian withdrawal from Ukraine’s east.

With Russia’s economy sinking, this would be a good time to try to be generous. Guaranteed rights for Ukraine’s ethnic Russians and an end to NATO expansion should also be on the table, as Switzer suggests. But the essential quid pro quo is a complete restoration of Ukrainian control over its eastern provinces.

The question is whether or not any sort of “appeasement” can bring Putin to concede that. If not, there could be darker days still ahead for Ukraine.

There are of course other alternatives that should be considered. It might start with a recognition that the Kiev regime was installed in a US backed coup d’etat. A further step would be to recognise that it is the Kiev regime that is waging war on its eastern oblasts, contrary to the terms of the Minsk peace agreement.

A third factor would be that the overwhelming majority of people in the eastern oblasts are Russian speaking and in recent elections opted overwhelmingly for independence from the Kiev regime (which is not the same as wanting to join Russia).

A fourth factor would be to recognise the historical and political realities of Crimea and stop pushing the nonsensical proposition that it was a Russian annexation as if that happened in a vacuum.

Fifthly, there is absolutely no evidence that Russia has designs on the Baltic States and to imply otherwise is sloppy thinking at best.

No doubt since Mr Richardson penned this piece Russia has announced that it is ceasing gas supplies that transit Ukraine. This has huge implications for Europe, yet curiously the Australian media seemed not to have noticed. There is a fundamental realignment of Eurasian politics going on and Australian commentators would be well advised to pay attention there, instead of constantly promoting the US inspired view of the Russian bogeyman.

Thanx for an interesting post. Can the west be trusted? I understand that one of Putin’s grievances is that Nato continued to expand east despite promises to the contrary given in exchange for Russia’s acquiescence at the reunification of Germany.

Thanks Gavin – yes, that’s certainly a key point. It’s not clear exactly what promises were made, but clearly the Russians interpreted it as a guarantee that NATO wouldn’t expand further east. The lack of trust on both sides now is a major part of the problem: the western view is that Putin has already reneged on promises about non-intervention in Ukraine, so reaching a new agreement won’t be easy.

NATO countries signed the agreement with Russia not to expand to Russian borders.

I think that spreading lies by the media is not helpful
Russia did not recognise the referendum in Donbas. They never wanted to annex Eastern Ukraine. ANd there wa no need. They expressed their views that they respect people’s of Donbas will, but they would rather support a kind of federation in the Ukraine to make sure that people can enjoy their language and the culture. In Eastern Ukraine there has never been any other major language spoken but Russian! The people of Donbas are not migrants.
Let us try to imagine what would happen if all of a sudden all people in Canada were allowed and obliged to speak French only!!!
Russian view, expressed many a time is that Western Ukraine needs industrial East and the industrial east of the country needs fertile soil of the West.
Also, the people of so called Western democracies fail to understand or simply do not know that up this infamous coup there were no patrolled borders and no check points between Russia and Ukraine. People moved freely and worked on both sides of the frontiers. This movement has been denied by Kiev and the families spread all over both countries have now limited right to see their relatives . Over 3 million Ukrainians work in Russia and were commutting daily. (and freely)
In 1991 the elder Bush, George Bush the then president of the USA during his visit to the Ukraine in his famous speech which is known as ‘Chicken Kiev’ advised Ukrainians to stick to alliance with Russia in order to survive . Many Westerners may not like the speech which is still in the net, but the history has proven G. Bush was right.