Charlie Hebdo attack was not an assault on free speech 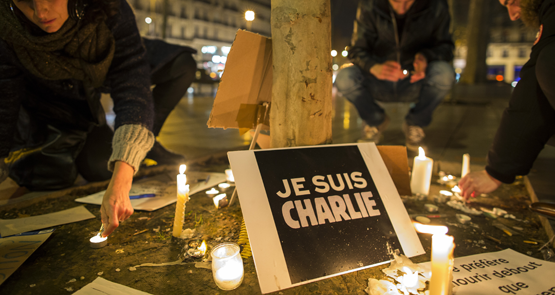 Despite how it has been appropriated, especially by world leaders, the Charlie Hebdo massacre was not an assault on freedom of speech.

In a liberal democracy, freedom of speech has a specific function. A liberal state is one in which the state itself claims not to favour one particular set of answers about how one should live or what one should believe over any other. As British literary critic Terry Eagleton has put it, so long as you show up to work and avoid assaulting policemen, the liberal state doesn’t care what you believe. This is an idea that has a lot going for it.

This entails two things. First, the state must refrain from policing what is said in the public sphere; it has no role in deciding what is and is not acceptable. This doesn’t mean that anyone is obliged to give you a platform, or that anyone has to listen to you. It means that you have the right to speak without fear of that speech being criminalised (assorted exceptions are made: some reasonable, such as defamation and incitement to violence; others not so, such as the causing of offence).

Second, it means the state has some role in ensuring that you can speak in the public sphere without fear of violent reprisal. This is congruent with the state’s role in policing violence anyway.

The Charlie Hebdo massacre was either an attempt to silence those killed, or to punish them for their speech. It likely had the further aim of sending a message to Western journalists at large. In any of these cases, it can easily look like an assault on free speech as such, and so it is unsurprising that it has been taken this way.

But we must see how it is distinct from an attack on free speech as such. First, there was no push to criminalise Charlie Hebdo‘s speech. Second, the attack itself has been treated as an act of violence; the state has not let the assault stand. As Guy Rundle has pointed out, the mass solidarity for freedom of speech and against violence had something absurd about it, since there was no push to restrict speech or to normalise violence.

So what we have is a single, despicable, criminal attack: one attack does not put a cherished institution under threat. If such attacks were to become frequent, then that would be a threat to free speech, since the state would be seen as unable to protect its citizenry from violent reprisal, and so their speech would be curtailed. But to pretend that moment has already arrived is to overreact — or, more cynically, it is to exploit public horror for more nefarious purposes.

There is a real threat to free speech, and it could be seen marching in the “Unity” rally that followed, and could be heard loudly affirming that this assault to free speech could not be allowed to stand unchallenged. As journalist Sharif Nashashibi put it: “The solidarity rally in Paris was attended by a who’s who of enemies of free speech and independent journalism.”

David Cameron, for example, has just announced that he would like to outlaw encryption that his intelligence services cannot crack — “Are we going to allow a means of communications which it simply isn’t possible to read?” he asked. I expect he will soon announce that every letter to pass through the UK postal system will be scanned and kept for future reference, and teachers will be required by law to gather every note passed by children in class, to be safely deposited with the nearest government surveillance office. Universal surveillance, of the kind revealed by Snowden’s leaks, is a real threat to free speech — and, even worse, it is an attempt to police not only public, but private speech.

In his superb 2014 book The Muslims are Coming!, Arun Kundnani presents an analysis of the ways UK and US domestic counter-terrorism have policed the speech of their Muslim citizens. In the name of fighting “radicalisation”, certain ideas are treated as virulently contagious, and the expression of them is treated as a proto-criminal activity. The FBI has taken to ferreting out Muslims who express views critical of US foreign policy, and then going to great lengths to lure them into a “terrorist plot” in order to lock them up. Merely translating “extremist” documents and videos is criminalised as providing material support to terrorism. The liberal state, which is supposed to be committed to the notion that it is not the arbiter of what its citizens believe and what they are allowed to say, has taken to policing the thoughts and speech of these citizens.

All of this is done in the name of protecting freedoms, including freedom of speech. And no doubt the Charlie Hebdo attack will be mobilised to police speech further, in the name of free speech.

So it is directed at ‘outsiders’.

The context never was ‘free speech’ WITHIN democratic societies. That is supposedly a given, or at least is meant to be.

Of course, “the liberal state doesn’t care what you believe”, but freedom of SPEECH is about the extent to which society determines you may voice your beliefs. If Tim Jarvis’s ‘university’ hasn’t explained that to him it has a serious problem.
Mr Jarvis mentions “an idea that has a lot going for it.” His long meanderings are certainly not one such idea.
Tony suggests that free speech within democratic societies is a “given”. Even to the limited extent there may be an element of truth in that assertion, the nature of such a ‘given’ is determined by the legislators, and isn’t established by claims that it’s somehow ‘self-evident’.

David David David. You can decrypt any encrypted text, it just requires a significant effort to do so. What you are scared of is a world where everything is encrypted, thus nullifying systems that scan for keywords, or content index text. Well guess what? That isn’t legal. Get a court order to decrypt exactly what you want. No more fishing expeditions.

Wow, talk about a straw man argument. Just a suggestion Tim – ditch the philosophy studies and get a full time job. You (and your future self) will thank yourself many times over

Phillip, you haven’t allowed for how Australian Universities use taxpayer moneys allocated for teaching students to projects which enable them to create positions for staff who aren’t engaged in teaching students. Moneys are even able to be used for building 5 Star Hotels which can then accommodate full fee overseas students adding even more cash to the pot.
Tim need not worry.