Is The Australian out to get the Human Rights Commission's president because she's about to embarrass the government? The Oz 's editor doesn't think so, report Mahalia Dobson and Myriam Robin. 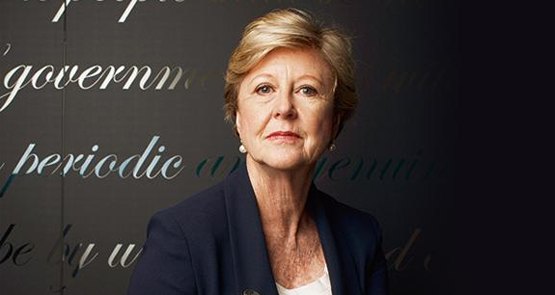 With Triggs’ report on Australia’s treatment of children in immigration detention detainment to be released soon, Ackland wrote in a piece published on The Guardian that Triggs is “vulnerable as a subject of political assault from a media organisation largely dedicated to fearless cheerleading for the Coalition Government”.

The Australian has, in recent days, been running a series of articles on a report they claim showed Triggs recommending favourable treatment for a refugee found guilty of manslaughter over the death of his partner.

But asked by Crikey whether allegations of a concerted effort to undermine Triggs ahead of the report were accurate, Oz editor Clive Mathieson dismissed them as “complete nonsense”.

In June of last year, Triggs wrote a report in response to a complaint to the commission from a refugee who had been held for more than seven years in the Villawood Immigration Detention Centre. John Basikbasik arrived in Australia in 1985 and was granted a protection visa 11 years later despite having committed a series of criminal offences dating from 1986. In 2000, he was charged with the manslaughter of his partner and sentenced to seven years of imprisonment, with a non-parole period of two and a half years. His protection visa was cancelled in 2003 and he was detained at Villawood, where he’s been since.

The detainee complained to the commission that his human rights had been violated under Article 9 of the now ratified International Convention on Civil and Political Rights. Triggs examined the case and argued that his detention had been arbitrary and “disproportionate to the legitimate aim of the Commonwealth”. She recommended the Commonwealth pay him $350,000 compensation over the circumstances of his detention.

In the last week, The Australian has written a series of articles disagreeing with Triggs’ recommendations and raising concerns that, if released, Basikbasik would pose a threat to women. The paper also reported that “former ministers from both sides of politics stood by the actions that have kept Indonesian killer John Basikbasik in detention rather than releasing him into the community.”

Ackland, one of the country’s foremost legal journalists, defended the recommendation for compensation, writing that:

“Compensation is a remedy available under the AHRC Act. Triggs used as a guide damages that have been awarded by the courts in cases of false imprisonment … On this basis, a recommendation of $350,000 for over seven years arbitrary detention is not excessive.”

Ackland writes that the implication that human rights do not apply to everyone — regardless of whether or not they are convicted of a crime — can be drawn from the “assaults” of the Murdoch press, saying “this line of thinking takes us into the realm that it is acceptable to detain someone at the government’s pleasure, without charge, without trial, forever”.

“This is nothing short of a political campaign to take Triggs and the Human Rights Commission down a peg, if not severely damage both of them, on the eve of discomforting news about Australia’s treatment of children in immigration detention.”

Asked whether he had a response to Ackland’s criticisms, Mathieson said all the paper had done was scrutinise some of the AHRC’s “more questionable decisions”.

“The timing of the commission’s report on asylum seekers has nothing to do with our coverage of the issue. The reaction to our reports shows there are wider concerns about some of the AHRC’s decisions.”

‘Nauru is hell on Earth’: kids beg not to be sent back

Gillian Triggs is typical example of the smug, self satisfied legal establishment who love pontificating about fine principles to the people who pay their salaries and have to live in the real world below. Notice how she delayed her inquiry into children in detention until after Labor had left office. Now Australians must be worried about the ‘huamn rights’ of a man convicted of manslaughter- Gillian feels it appropriate to award this man 350k (our money, not hers).

Unfortunately, john2066, their least dangerous aspect is grandiose pontificating about the joys of abstract ‘theories’ they unquestioningly accept.
It’s the ‘disinterested’ manner in which they pressure elected politicians who don’t pay supine obeisance to the P.C. Deities which does Western Democracies most harm.

john2066 and Norman – you’re absolutely right. All this namby pamby human rights stuff is enough to make you sick, isn’t it? Let’s get back to the good old days of Hitler and Stalin, eh? They’d soon put this uppity bit of fluff in her proper place!

Good to see the trolls out of the blocks so quickly lol.

Of Course Gillian Triggs and the HRC have to be character assassinated. This government has continued and exacerbated gross abuse of children. Even ardent refugee haters feel a little queasy about watching their government doing nasty horrible things to kiddies.
Abbott and Co know this.
Their policy orders will not stay hidden so the messenger must be shot down.
The Australian like the Dutch Telegraaf during the Nazi occupation of Holland are fulfilling the role of a “nasty” government. There are many in Holland to this day who will never let a Telegraaf into their homes- some of us feel same about the Australian.

Graeski, you remind me of when I was listening puzzled by the beliefs of the well-intentioned Marxists in “the good old days” of the 1940s as they sat discussing how the world would be better as soon as their ideas were adopted. They too talked about civil liberties, and like you failed to analyse their premisses.
Fortunately I came to know intellectually coherent proponents of civil liberties such as Clarrie Martin and Roy Fagan, but who knows, one day you too may be as fortunate.