No mental health issues at the Australian Border Force ... indies go it alone in Queensland ... North Korea has fans in Melbourne ...

Check that baggage at Customs. After yesterday’s tip that morale was down at the Department of Immigration as it merges with Customs, we hear from a commenter that the new “dictatorial” regime is not going down well with staff:

“I had an idle chat to someone at Christmas near the centre of power in the new Customs-run Department (but not senior) and got the impression that Customs had very little idea of how the Immigration Department functions nor of the complexity and nature of the work it does. There seemed to be a bit of an obsession with counter-terrorism and with preventing the type of big-money narcotics trafficking that Customs staff had engaged in in Sydney and very little understanding of the balancing act between facilitation and control that Immigration decision-making involves. With a minister who doesn’t seem to be very bright and seems to think his role involves illegal bikie gangs, this amalgamation could be very troubled.”

We also hear from a tipster that the organisational security assessments that are compulsory for employees wanting a job in the “Australian Border Force”, the new combined department, will knock out anyone who discloses a mental health issue:

“Management is advising that anyone with a mental health issue will not pass the OSA. So, any officer that has been affected by their work in Immigration or Customs work or their previous military/police career can expect to be sent packing. As a heads up, mental health does not affect actual security clearances, so an officer could still be eligible for their NV2 security clearance but be found unsuitable by Mike Pezzullo’s OSA.”

We put the tip to Customs media and received this response:

“No. Mental health issues are not a relevant risk factor for the OSA.”

Where else but Queensland? Another day, another update from the campaign trail, where the Palmer United Party yesterday took to social media in typically understated fashion to showcase its candidates for the January 31 poll. We’ve already heard that some minor parties had been caught out by the shock January election announcement and struggled to round up candidates, but it seems that Clive Palmer has overcome the hurdle, with more than 30 candidates across the 89 electorates. Among the candidates are a few familiar faces, including Tess Sanders Lazarus — Mrs Brick with eyes — who will be repping the yellow scarf brigade in the seat of Buderim. Phil “Sting” Collins, Palmer’s chief of staff, will be running (against all odds) in Caloundra, and three of Palmer’s nephews are also running. While the Palmer United crew are a motley bunch, it is one of these nephews, Martin Brewster, who is Ms Tips’ favourite. Brewster, running to represent the people of Hinchinbrook, bears a handlebar moustache that makes him look like he should be holding up a Saloon in a spaghetti Western — surely this level of dedication to a hairy upper lip should be rewarded. 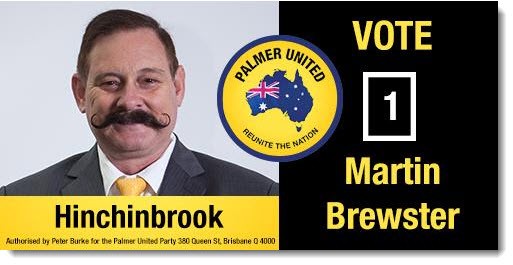 Also from the Queensland independent scene, there have been reports that minor parties such as PUP, Katter’s Australian Party and One Nation had reached a deal to preference each other instead of the major parties, but we hear that no deal has in fact been done — all minor parties will simply tell voters to “vote 1” for their candidates. With no upper house, and an optional preferential system, this could lead to a high rate of vote exhaustion, where preferences end and votes are put aside. While that will most likely mean that minor parties will struggle to get elected as they all court the same section of the population, we hear from those in the know that it could be bad news for Campbell Newman.

New year, new you. There’s a new broom at Victoria’s Department of Premier and Cabinet, and yesterday he started sweeping. In what one Spring Street bureaucrat described as “the biggest shake-up ever”, our friends at The Mandarin tell us deputy secretaries were cleared out and a new strategy rolled out. The day after Labor took power in Victoria, DPC head Andrew Tongue was fired and former top New South Wales mandarin Chris Eccles brought in to drive the agency the way Premier Daniel Andrews wanted. Staff have been told to prepare for a significant culture shift under the new boss. And the mood? Excited, we’re told; it’s been a long time coming. Do you know more? Drop us a line …

Battle of the beheaders. If you’re planning to head along to any of the Asian Cup matches in Melbourne, we suggest you book ahead. There were long, long queues at AAMI Park (sorry, Melbourne Rectangular Stadium) to get into last night’s heavily attended North Korea v Saudi Arabia match. Hundreds of people were queuing up well into the first hour, a tipster tells us, and there were worse queues for Sunday’s match between Iran and Bahrain. Other attendees report the North Korean supporters’ area was sold out. Tickets were selling at half-price. Not that Saudi Arabia wasn’t well-supported — actual Saudi fans and all the hipsters who attended were rewarded with a convincing 4-1 victory. Trust us on the hipsters — some supporters had “Je Suis Charlie” written on the back of their banners of King Abdullah and Kim Jong-un. As you do.

Ms Tips couldn’t help but spare a thought for the North Korean players, who scored first but seemed to tire by half-time. At the 2010 World Cup, there were reports of footballers being subjected to a gruelling six-hour public excoriation for “betraying” their nation with their poor performance. Eagle-eyed observers (not Ms Tips) said they spotted the North Korean coach regularly speaking into a small device he kept up his sleeve. Could it be you-know-who? Alas, North Korea’s loss appears to rule out the odds of a North v South Korean derby in the Melbourne quarter-final. All that would have needed was one more win from South Korea and two from its Northern neighbour. Oh well.

On the way to Adelaide. Ms Tips is in the process of deciding on her travel itinerary this year, considering adventures far and wide. Adelaide has just been boosted quite high on the list of priorities, after the New York Times listed it as number 24 in the “52 Places to Go in 2015” — the only Australian city to make the list. The piece points to Adelaide’s dining scene, as well as its cultural festivals. While 2014 was the year of praise for Canberra, perhaps this year will be Adelaide’s time to shine.

Catchy title you’ve got there. Yesterday we brought you an alternative Australian anthem, but today we widen your musical horizons to The Smith Street Band,  who are celebrating our national day this year by releasing the single “Wipe That Shit Eating Grin Off Your Punchable Face”, written in protest of the government’s asylum seeker policies. Proceeds from sales of the song, available online and on vinyl, will go towards various asylum seeker projects. It’s no Midnight Oil, but not bad for political music.

Australian of the Year goes to … Over the last three weeks The Australian has been publishing daily nominations for their Australian of The Year award, including such worthy nominees as Lois and Juris Greste, the parents of jailed journalist Peter Greste. Most days it’s been a great read, including names that often fly under the radar. While last year Crikey readers voted disability activist and comedian Stella Young as person of the year, over at the Oz today mining heiress Gina Rinehart got a nomination, for nothing much more than being rich and doing business. 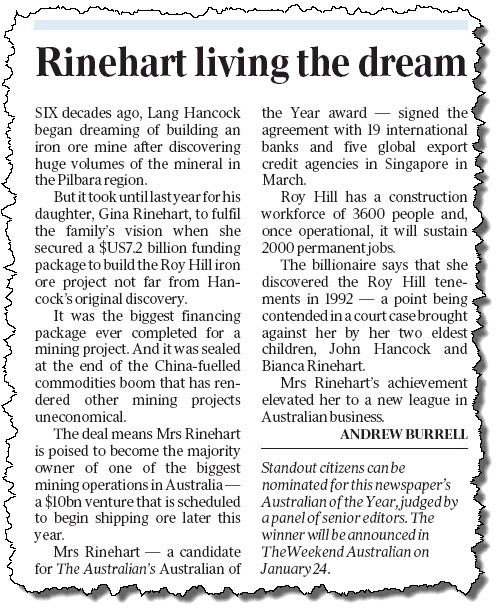 Inherited wealth too! What a dismal article.

I’m definitely going to buy the vinyl of the Smith Street Band. Telling it like it is! It will be a great companion piece to my 80’s single from Johnny Demon and the Devils entitled, “You Make Me Spew” 😉

One could be forgiven for assuming Brewster’s campaign sign has been defaced.

Not even the Scum King’s serfs could seriously make Rhinohide the paper’s person of the year! Shorely shome mishtake here?
Zut – I wondered where he’s put the Groucho nose & glasses – or the Bavarian topper.