A brief history of death-defying popes

As Pope Francis tours his way through Asia, we take a look back at some of his predecessors' hairiest encounters abroad. 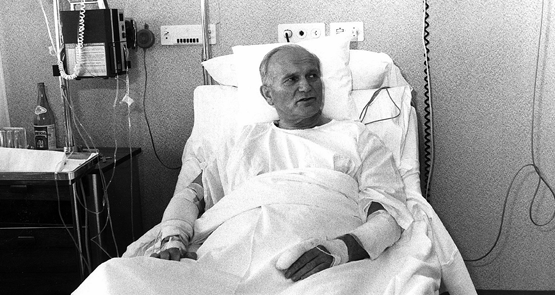 Pope Francis’ long-awaited tour of Asia is in full swing, and people are starting to get nervous. In light of the People’s Pope’s apparent disdain for modern conveniences (such as bullet-resistant glass), security have been understandably worried about saving Francis’ bacon. His Holiness has dismissed security concerns as just another staple of papal life. Always keen to accentuate the positive (and with one eye on the sky), Crikey looks back at some of the times where the grace of God, good security and the occasional goddamn fluke have prevented catastrophe in the Catholic Church.

Blessed Pope Paul VI holds the dubious honour of being the target of, in the words of the Vatican, “the first papal assassination attempt in modern history”. Travelling through Manila Airport in the Philippines in 1970, the puzzled pope was set upon by a Bolivian surrealist painter dressed as a priest and wielding a 13-inch dagger, a detail which speaks volumes about artistic insecurity.

Bellowing out “death to superstition!”, Benjamin Mendoza y Amor Flores managed to simultaneously give poor old Paul a minor flesh wound and prove conclusively that extremism is not limited to any one ideology or creed. Speaking of the assault years later, Paul’s personal secretary Pasquale Macchi — who managed to drag the wannabe Wilkes Booth off his boss before he was turned into a Jackson Pollock — described the Holy Father’s reaction as curiously serene. “It was as if he was enjoying a moment of inspired joy,” he said. Perhaps it was only then that Paul VI realised a truth known to world leaders since Caesar: if they’re not trying to kill you, you ain’t doing it right.

On that basis at least, Saint John Paul II earned his sainthood in spades. The Polish preacher was attacked in front of a crowd of almost 20,000 when a 23-year-old escaped murderer opened fire on the Popemobile from 15 feet away, hitting John Paul in the stomach, right arm and little finger. The pope made a full recovery and later forgave his attempted killer, working with the Italian president to have Mehmet Ali Agca pardoned after only 19 years of his life sentence. Agca was probably not too shocked when, upon his return to Turkey, he was taken by police to serve the rest of that pesky murder conviction he’d escaped from. Still, it’s the thought that counts.

Sloppy as it was, this shootout did little to prepare the papal police for a plot so insidious, the real crime is that it hasn’t been made into a film yet. Days before his 1995 visit to the Philippines (which we’d have thought the popes would have learned to avoid by now), local police investigating a fire alarm in an apartment in Manila stumbled upon an al-Qaeda plot to blow up the pope using liquid bombs, clerical vestments, a Bible and, most damning — potentially literally — a picture of His Holiness himself. Abdul Hakim Murad, accomplice and trainee of 1993 World Trade Centre bombing mastermind Ramzi Yousef, was apprehended returning to the apartment for his laptop. Helpfully, the computer — now in police custody — contained plans for a 48-hour reign of terror targeting 11 airlines and blueprints for a series of devastating attacks on American soil. Whether the smoke wafting from the liquid bombs out the apartment window was black or white is still unclear, but this may be the one time that a popeful hopeful didn’t really care about the distinction.

By contrast, Benedict XVI led as blessed a papacy as can be expected for someone who never really clicked with the public beyond a “wasn’t he in the Hitler Youth?” level. Despite this, Ben had his fair share of close encounters with people who perhaps took comedian Bill Bailey’s suggestion that no list of Things to Do Before You Die would be complete without “lunge wildly at the Pope” too literally. Echoing an earlier German man’s attempt to hurl himself over the barricades towards the passing Popemobile, a woman rudely interrupted the 2008 Christmas Eve service by seizing the 82-year-old man and dragging him to the floor. As farcical as it sounds, this baffling attempt — the second the woman had made in two years — resulted in a broken hip for 87-year-old French cardinal Roger Etchegaray, who was similarly toppled in what The Telegraph dubbed “the ensuing melee”.

Pope Francis’ willingness to put his life at risk for the sake of his community does him credit. But if you’re still set on going to Manila, Francis, best keep the Swiss Guard handy.

Benedict hands in the hat: Popes by the numbers