Movement at the top level of Immigration and Defence departments ... we debunk Sydney siege rumours ... a new national anthem.

Immigration — the place to leave. Last year we brought you the news that three out of five deputy secretaries had left the Immigration Department, with our tipster telling us that morale had taken a hit after new secretary Mike Pezzullo took over. We hear from another tipster that the exodus has continued into the new year:

“The exodus continues at Immigration, with three more senior executives announcing their departure; two to the Department of Health and one to Prime Minister and Cabinet. The rest of the Senior Executive find out in the next week or so whether they will have jobs or not. If anything morale is getting worse.”

It’s not a good sign for the department, which is also dealing with a new minister — Peter Dutton, who has just been ranked as the worst Health Minister in 35 years in a poll by Australian Doctor magazine. We put the tip to the department and were told:

We’ll be keeping an eye on the merger of Immigration and Customs over the next few months. Know more? Tip us off.

Defence changes? While staff at the Department of Defence gets used to new minister Kevin Andrews (we wonder if he will offer them marriage counselling too?), we hear from a tipster that Defence chief of staff Sean Costello won’t be staying on. Costello was the guy who enjoyed expensive meals with former minister David Johnston last year. We asked Costello if he was staying in the role, and he told us that no decisions had been taken, therefore he had no comment to make. We’re watching this space.

Sydney siege rumours debunked. Guy Rundle wrote yesterday that there are many questions still to be answered about the police response to the Sydney Siege, which eventually claimed the lives of Katrina Dawson and Tori Johnson. The piece prompted a few of our tipsters to get in touch with their own versions of answers:

“In hostage situations, the ‘rescuers’ are taught to fire their weapons on semi-automatic, either single shot or double tap. Fully automatic — which is difficult to control — must not be used for obvious reasons including the danger of ricochets. Listen to the audio of the storming; two long bursts of full auto at the end.”

“The Tactical Assault Group East 2nd Commando Regiment is based in Holsworthy and could have finished this with hours of it starting but that requires the State to ask the Federal Government to take over the incident. That this didn’t happen means the NSW Government and Police didn’t treat this as a terrorist incident or allowed an agreed domestic criminal act to escalate out of control unnecessarily. There is enough data to show that is was probably the latter which explains the confusion around the negotiation and final assault tragedy. The capability difference between the TAG and the Police is an order of magnitude greater professionally and technically.”

We put the tips to Dr Clarke Jones, an expert in counter terrorism at Australian National University, to see if our tipsters were on the money. In relation to the use of automatic weapons, he said:

“It’s important to note that Monis had a shotgun, which means that if he was to fire the shotgun there was a danger that pellets would spread hitting a large number of people within the cafe and there’s also the possibility that he was wearing an explosive devise, which was later found to be incorrect. It’s very difficult to criticise these actions of police without knowing what actually went on inside the cafe and in the immediate vicinity.”

On handing over control to special forces, he said:

Pollie spotting. Prime Minister Tony Abbott is away on holiday this week, or, as opposition leader Bill Shorten says “in witness protection”, but one of our tipsters claims to have seen the PM in his natural habitat in Sydney before Christmas:

“Just after Christmas I was on my morning walk through the mean streets of Double Bay. As I passed the well known workers’ ‘caf’, the Cosmopolitan, a gaggle of cyclists pulled up and among them was PM Tony Abbott. I thought he must have stopped off to press the flesh with the common man. After picking up the ever-shrinking Fairfax daily I walked back past the Cosmo and noticed a one legged Myna bird standing on the PM’s bike seat. I willed it to leave a deposit but alas no luck.”

We’re not sure how our lyrical tipster knew it was the PM’s bike, but we’ll take his word for it.

Of idiots and stupidity. In Queensland, it seems that you can’t arrest everyone wearing a t-shirt that makes you look bad. This man managed to get a photo op with Premier Campbell Newman without the police getting involved. We’re guessing LNP minders are wishing they vetted this a little more closely. 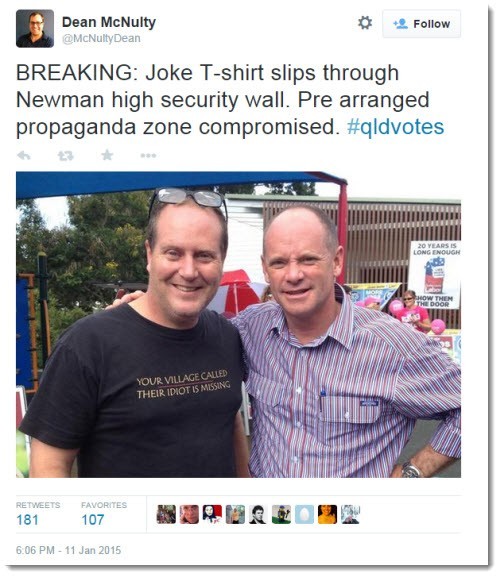 Send us your details. We hear from a tipster that the Queensland LNP has wasted no time sending out postal votes forms with prepaid envelopes — addressed to party headquarters:

“I just got some electoral fluff from my local member, Noosa MP Glen Elmes, which can be summed up as ‘brighter future strong strong tough decisions strong more jobs strong — Labor win chaos, flops, weaker — keep Queensland strong team stronger sincerely, etc.’ With this was a postal vote form and a prepaid envelope addressed to: Noosa, PVA Centre, Reply Paid 86384, Spring Hill, Qld, 4004. I gave the electoral hotline a call and they could only tell me I had two options — send the form directly to them (ignoring the prepaid envelope), or send it via the prepaid envelope which would then be, eventually, sent on to the electoral commission. ‘I don’t know anything about it, mate, but apparently they’ve been doing it for years,’ they said.”

The Queensland electoral official who took our tipster’s call should be paying more attention to Crikey; we’ve been covering this since 2013. Received anything interesting from your local MP or candidate? Pass it on.

All let us rejoice. Australia Day is less than a fortnight away, and while supermarkets are seeing just how many products they can put an Australian flag on, a contender for possibly the best alternative Australian national anthem has appeared on YouTube. Ms Tips thinks this one, called “Straya” to the tune of Outkast’s Hey Ya, might even be better than comedian Adam Hills singing Advance Australia Fair to the tune of Jimmy Barnes’ Working Class Man. Between the two versions, we’re feeling very patriotic. 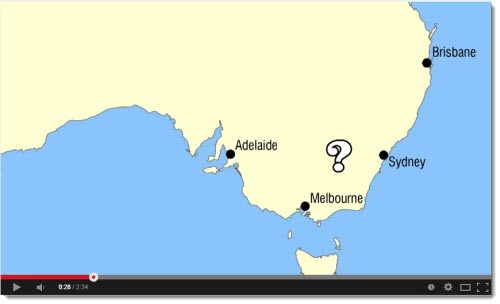 Re Customs takeover of Immigration: I have heard anecdotally that many immigration staff find the new regime rather dictatorial. And I had an idle chat to someone at Xmas near the centre of power in the new Customs-run Department (but not senior) and got the impression that Customs had very little idea of how the Immigration Department functions nor of the complexity and nature of the work it does. There seemed to be a bit of an obsession with counter-terrorism and with preventing the type of the big-money narcotics trafficking that Customs staff had engaged in in Sydney and very little understanding of the balancing act between facilitation and control that immigration decision-making involves.

With a Minister who doesn’t seem to be very bright and seems to think his role involves illegal bikie gangs, this amalgamation could be very troubled.

The witless brain fart from the new Minister Dunnuttin in recent weeks (in SMH)that Customs officers at the airport will be armed is beyond the banal stupidity one might expect from a exQld walloper.
There are already THREE (3.. count’em!)armed agencies at Sydey airports, the AFP, the APS and SW Police.
Never mind that incomig passengers have already passed through several stringent screening checks before approaching Oz airspace, just what is needed in a crowded baggage haul, another bunch of machos with guns and minimal traiig.