Rundle’s war on everyone. Glencore's latest gaffe. Indigenous paper shut down by legal bills. Sydney siege shooting rumours debunked. Senior staff flee Immigration. Why the West can't wash its hands of Paris shootings. Newman needs to auction assets to get Qld back in the black. NSW Labor's return to the spin cycle. Does America have a 'war on police'? Dear conspiracy theorists: water fluoridation works. And Abbott spotted in his natural habitat.

Talk about a hospital pass. With doctors taking to the streets, the former health minister Peter Dutton’s reforms have become a nightmare for his successor, Sussan Ley.

In early December, Tony Abbott replaced the $7 co-payment proposed in the last federal budget with a new “optional” $5 co-payment (starting from July) and a cut of up to $20 to the Medicare rebate paid to doctors for consultations under 10 minutes.

As one doctor tweeted when the new rebate was first reported: 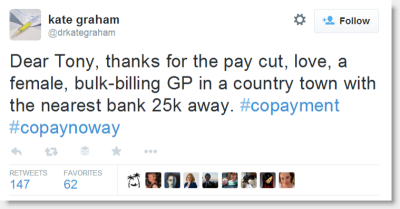 The rebate cuts come into effect on Monday in what the Australian Medical Association is already describing as a “sneaky” tactic over the Christmas break and the opposition is calling a “GP tax by stealth”. Many GPs, especially in rural and regional areas, are struggling financially and simply can’t absorb the pay cut: 87% of doctors surveyed by the AMA say they will be forced to charge patients more for consultations.

This is bad health policy, as our Croakey blog has argued repeatedly, undermining primary health care — the foundation of an effective health system — when it is widely agreed that the balance needs to be shifted away from a hospital-centric system.

The rebate cuts — expected to save half a billion dollars a year — are dwarfed by potential cuts of as much as $15 billion identified by the Health Department, as The Australian reports today. They are hardly even justified by budget repair because the money is being shovelled into the Medical Research Future Fund dubbed by some doctors as an “industry slush fund”.

Fundamentally hostile to bulk-billing, the government is pushing fiscal policy masquerading as health policy that will only result in a massive cost shift to the states, forcing more people into public hospital emergency wards. It’s hard to see how this won’t backfire on the Abbott government.

Meet our PM, Out Of Touch Tony.

How soon will he propose extra tax breaks for superannuants…

Meanwhile, in Qld, adds are running on TV telling people to only go to Public Hospital emergency if your condition is life threatening… So what happens if someone can’t afford medical care for a condition that, if treated early, may save money in the long term… Great forward thinkers, these Neo conservative types are…not

“. It’s hard to see how this won’t backfire on the Abbott government.”

Imagine how much we care about that.

Meanwhile the rAbbott government is GIFTING our taxpayer monies to polluters to pollute less.

Hello National Party are you still there? Where are you in regard to: …Many GPs, especially in rural and regional areas, are struggling financially and simply can’t absorb the pay cut.