Why are young Australians shunning events like Big Day Out and instead flocking to multi-day music festivals out of the city? Crikey intern Mahalia Dobson explains. 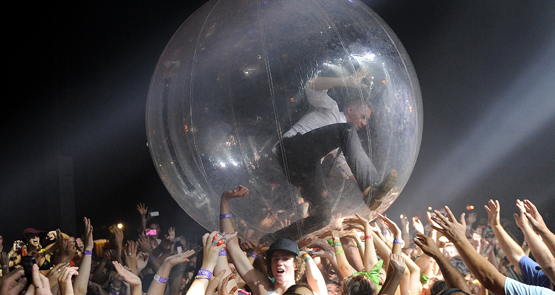 It’s usually around this time of the year that festival-goers are gearing up to get hot and sweaty at what was, at least historically, the ultimate one-day festival: Big Day Out. But these dog days are over, because Big Day Out’s new owner, C3 Presents, has cancelled the event in Australia and New Zealand. Plummeting ticket sales have made the festival financially unviable, they say.

Far from being a unique story, BDO’s tale of ruin is playing out across the one-day festival circuit.

According to an article published on Vice, last year alone saw Harvest, Peats Ridge, Homebake, Pyramid Rock, Playground Weekender, Push-Over, and the second Sydney Big Day Out festivals all shut down for the same reason. Groovin the Moo only managed to sell out three of four shows, and Perth lost both their Big Day Out and Soundwave tours. Soundwave promoter AJ Maddah jumped on board the 2014 Big Day Out tour and his company lost millions in the process.

So what exactly is happening to Australia’s music festival industry? And where are former BDO die-hards going to soothe their festival fever?

It appears “bush doofs” and multi-day festivals are beginning to take off. Last year, early bird tickets for Strawberry Fields — pitched as “an annual celebration of art, sound and creative expression” — sold out within one hour; in two and a half days, the festival sold more tickets than they did over four months in 2013. Rainbow Serpent sold a record of 15,000 tickets. Falls Festival sold out in both Lorne and Byron Bay and, just over a week before the festival begun, only had 500 more tickets available for the Tasmania-based festival.

According to data from Sweeney Research, there are a number of important factors that explain the growing success of multi-day festivals: cost, cultural atmosphere, and niche appeal.

Festivals aren’t cheap. Ticket prices are almost always in the triple figures, and then you have to pay for expensive food and drinks. So it makes sense that festival-goers want to stretch their dollar further.

Nicholas Greco, director of multi-day festival Beyond the Valley, told Crikey, “Going to a festival is a big expense for the patron so it becomes a value thing. There is more value in committing to a multi-day event than a one-off event”. To illustrate, in 2014, a single BDO ticket cost up to $185. Compare that with a single-day ticket for the multi-day festival Splendour in the Grass, which costs about $150. A camping ticket for Rainbow Serpent costs about $280 — the equivalent of around $70 a day over four days.

Festival-goers now prefer an immersive and relaxing experience to constant stage-hopping. Festivals like Strawberry Fields and the gaudy Rainbow Serpent transport you to an entirely new world. Not only is there live music, there are dozens of little niche stores with locals selling everything from jewellery to hippie pants to crystals and palm readings. Festivals that provide patrons with this kind of experience have seen attendance numbers skyrocket, while traditional one-day festivals decline. Sweeney Research found that only 10% of 18-30-year-olds see the BDO as “laid back” and a mere 19% perceive it as being “social”.

Crikey spoke to a group of festival-goers and found that many between the ages of 19 and 22 prefer multi-day festivals and bush doofs over one-day festivals because of the camping experience and because a longer stay gives you more time to relax into the festival spirit. “Time is irrelevant at a multi-day festival,” said one festival-goer. “Mobiles aren’t needed. You’re simply out in the wilderness with those you care about.”

Nobody does it quite as good as you

Today’s most popular music festivals appeal to a specific subculture. Rainbow Serpent, for example, is known for its electronic music as well as its spiritual, hippie culture. Attendees can indulge in a variety of healing, yoga and art workshops.

Perhaps the success of a festival now largely depends on whether its organisers are able to recognise and appeal to a committed, niche audience. It’s certainly an area in which BDO — the organisers of which booked Soundgarden as their headliner in both 1994 and 2012 — floundered. Of course, Greco tells Crikey that it’s far too soon to call the death of one-day events. Greco does believe, however, that “the market has shifted more towards boutique style camping festivals. There is also many more festival offerings now so consumers have a lot more choice, whereas previously you only had a handful to choose from”.

Amy Malander is the promoter for Beyond the Valley. She told Crikey the most important thing people look for in a festival is something new — whether that’s the artists booked, ticket prices, gimmicks or the dates chosen. She said the success of Beyond the Valley depended on giving the festival a unique feel: “[We] had to make a statement and highlight the point of difference that Beyond the Valley has in comparison to other festivals”.

It remains to be seen whether Big Day Out can reclaim lost glory in 2016. For now, however, the decline in sales and attendance for single-day music festivals means multi-day festivals, like Elvis, are king.

Beenie man is a product of entrenched homophobia in Jamaica

The issue is more likely to be too many festival’s chasing a limited amount of consumer dollars.

in addition a festival only has to have one or two years with a poor act line up to lose a lot of money.

In the two or three years preceding the demise of Big Day Out (which I note was actually sold by Maddah to a US music and festival group and therefor likely to return in the future) BDO didn’t have a particularly stellar line up, the fans voted with their wallets and stayed away.

I also note that in Sydney Stereosonic and Soundwave both attract more than 80,000 patrons, somewhat disproving the claim that younger patrons are passing on big festivals. For example the Stereosonic attendance demographic is very much skewed towards a younger age group.

Good try young intern, but a bit more research might have helped. try interviewing people who don’t support your article’s thrust, such as the promoters of Soundwave and Stereosonic rather than provide an uncritical stage for multi-day festival presenters.

The risk in saying “according to Vice” rather than doing your own research is that you hoover up their errors. Playground Weekender fell over in 2012 and Peats Ridge at the start of 2013, not last year.

One of the most successful multi-day events in Australia is the Woodford Folk Festival. It has long ceased to be just folk, and has everything from pop through blues to country and folk – but also a wide variety of both traditional ethnic cultural music and dance as well as world music of various backgrounds. People can and do go to it and follow their own range of niche interests given the large number of venues.

Woodford in Queensland is not the only one – but it, Port Fairy in Victoria and the national in Canberra are the largest folk related in Australia.

What everyone shares is the atmosphere of the overall site, the wide range of food outlets and niche shops, the street entertainment and the camping ground scene. It tends to feel like a festival in a modern version of a medieval village.

This fits with the idea that people are seeking an immersive experience.

Thanx Peter: I was looking for some mention of Woodford and Port Fairy, to which one must surely add Tamworth. I don’t know how successful Womadeliade is currently. It certainly had numerous patrons when I attended several years ago, but as the article argues, festivals’ fates can change very quickly.

I’ve never been to Wangaratta’s jazz festival and so don’t know how big that is. It seems to attract ‘a few thousand’ patrons, and so wouldn’t be much bigger than Queenscliff and the other niche festival the article refers to. The classical music fans have followed with their own festivals, but I presume they are more quietly comfortable than outrageously successful.

Not interesting sorry and Michael James you are wrong.
You made three statements in your comment that are actually false. Rather than lecture the intern how about checking your facts before roasting someone for checking their facts?
In fact……I smell a rat.