Want a dart and a drink? Ms Tips has (until this weekend) had no more than a passing interest in darts, preferring pretty much any other sport. But after the fiasco at Etihad Stadium we’re considering getting involved. The pictures of audience members throwing chairs and tables and body slamming one another (all while in costume) have made headlines across the world, but according to this tipster, the cause was all too predictable:

“Shit has hit the fan at Etihad today. The beer figures for last year’s event, Friday night and Saturday night are off the charts. The caterer made alcohol too readily available. They were doing several litres per person.”

We hear from another tipster that beer (while only mid-strength) could be bought at the stadium, there were deals that promoted buying more than one beer at once, and this photo from the event seems to show that it was easy to buy more beer than one body could handle: 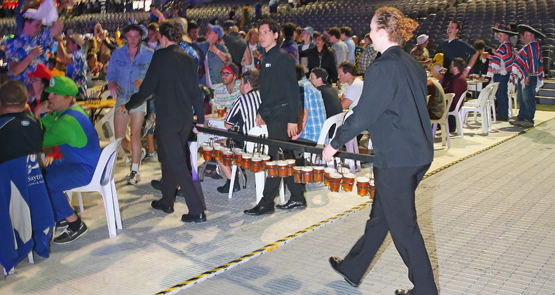 Sri Lankan President to do what? Taking clickbait to a new level at Fairfax, this picture is doing the rounds on social media, after the headline got cut off, which could leave readers thinking the new Sri Lankan President has it in for James Packer personally, and not the casino the mogul is planning on building. We hope Packer isn’t feeling too worried. 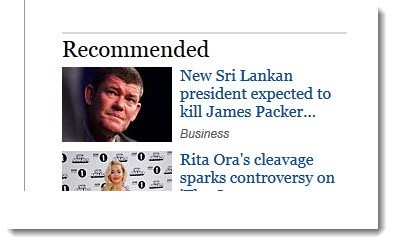 Alan Jones on the airwaves early. We told you last week that the Newman government had waited until Alan Jones had stopped broadcasting for the year to announce the expansion of the Acland mine expansion, and we bet they thought they were going to have an easier run with the whole election campaign taking place while Jones was on holiday. Of course, true broadcasters can’t stay away from the microphone when there is something to be said, and Alan Jones has decided to return from holiday early to broadcast on Fairfax’s 4BC in Brisbane for the last two weeks of the campaign. It’s a move that wouldn’t have been possible before Fairfax and Macquarie Radio merged last year, and one that will hopefully make the election more interesting. Of course we aren’t expecting Jones to give the ALP an easy run, but Campbell Newman is not among his favourites at the moment.

Seeing signs in Brisbane. In the Sunshine State campaigning is in full swing, with posters and flyers everywhere. We hear from a tipster that there’s a reason for an increase in Brisbane:

“The number of street signs for candidates in the Queensland election has been increased from 50 to 500 by Brisbane City Council. Rumour is that Campbell Newman campaign ordered 500 instead of 50 and his mates at BCC changed the rules for him!”

That would be very convenient for the Queensland Premier. We put it to Brisbane City Council and were told:

They also directed us to this website with their signage rules. We wonder if anyone can be bothered counting Newman’s signs in Brisbane — we’re guessing there’s quite a few. Have you received election material for the Queensland election? You can send it to us here.

Old man yells at cloud. While Attorney-General George Brandis is continuing his campaign to enforce mandatory data retention, over in the UK the Tories are complaining about messaging apps that don’t keep any data at all. According to The New York Times, Prime Minister David Cameron has said, “Are we going to allow a means of communications which it simply isn’t possible to read?”

He referenced apps such as Snapchat and WhatsApp, which introduced end-to-end encryption last year. “My answer to that question is: ‘No, we must not.'” While we know that all these new forms of communication are hard to get a grasp on, promising to ban them won’t just alienate the yoof, but also the many tech-savvy older generations, who we hear are becoming quite adept at Snapchat. Cameron may want to just swipe left on this idea.

Don’t count your chickens. While Easter eggs and hot cross buns have been in supermarkets for weeks, and the obligatory outrage has been expressed on talkback radio, we hear that Cadbury has given us something to be legitimately outraged about. Cadbury has changed the recipe for the eggs, which are the favourite of many with a sweet tooth. According to the BBC, the shell will now be made from “standard, traditional Cadbury milk chocolate” not Dairy Milk, and packets of five will replace the packets of six. That’s moved the Creme Egg down the pecking order for us this Easter.

Warnie all alone. There’s some things that it’s always inadvisable to share on social media, like taking a sickie to go to the cricket or that you are “very single”. No one seems to have told Shane Warne though, who posted this for his 1.87 million followers to see this morning. We feel bad for you Warnie, but we hear that the ladies like men who can move their face. Maybe that will help. 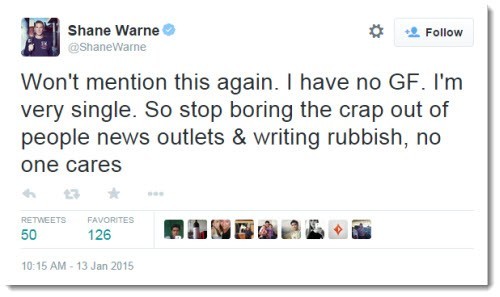 I went to the Hordern Pavilion to see the darts and the bloody beer line was atrocious. You had to wait ages and the max was only two drinks I recall.

Setting an election date to coincide with Alan Jones being on holidays? Well, I suppose that’s possible? Deciding to have an election campaign period, that coincides with Tony Abbott’s holidays? I suspect that’s more likely?