Rundle: so many questions from Sydney Siege, but no adequate answers

There are many unanswered questions from last year's Sydney Siege. And an internal police investigation is unlikely to provide the comprehensive answers Australia and the victims deserve. 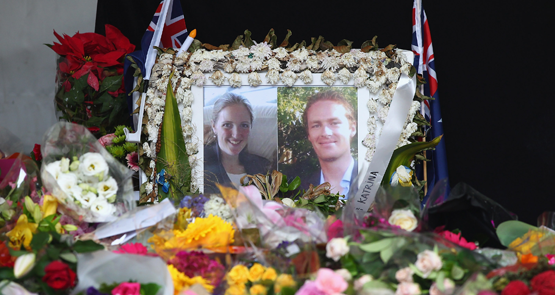 Twenty-eight days ago, just after two in the morning, customer Katrina Dawson and manager Tori Johnson were killed when the hostage stand-off in the Lindt Cafe at Martin Place was broken as police stormed the building. The hostage-taker, Man Haron Monis, was killed in that encounter. Now we know that Dawson, previously assumed to have been executed by Monis, was hit and possibly killed by police bullets as more than 25 officers stormed in. Police had initially claimed that she had died of a heart attack in an ambulance on the way to hospital.

Tori Johnson’s death is unclear too. Police claimed that the shooting of him by Monis had triggered their assault. It has been reported, however, that Johnson was shot after the police assault began, and that Monis’ first shot was a warning shot.

We’re learning some other disturbing facts about the siege and its end too — that the police were unwilling to let Muslim community leaders speak to Monis, that they had no clear strategy over whether to give Monis an Islamic State flag or not (for which he had said he would release a hostage) and that police had no ongoing contact with Monis for hours at a time during the siege.

It is the last of these that is most disturbing. The core imperative of any hostage negotiation is to maintain a connection with the hostage-taker, and establish a relationship with him (or, much less commonly, her). This is especially so when hostages have been taken not by professional criminals, but by those who believe that they have been “driven” to such an act, and have no other choice.

Monis certainly believed that. The would-be IS representative made all the right noises about jihad, but he was exercised about a lack of recognition by a quintessentially Australian institution — the High Court, which had rejected his appeal over a conviction relating to a series of poison-pen letters he had sent to the families of Australian servicemen.

Such men are desperate for recognition and a hearing, and Monis was certainly desperate. A domestic abuser, and possibly a wife-killer, he had veered from ostentatious anti-Australian jihadism to (literally) waving the Aussie flag and claiming that his poison-pen letters had been in the spirit of “helpful advice”.

Though he was clearly not insane in a legal sense, Monis was obviously disturbed and narcissistic, the type for whom a substantial negotiation exists. Put simply, if a hostage negotiator can establish a personal relationship with such a figure, convince them that they genuinely understand their troubles, and recognise their legitimacy, the hostage-taker has a good chance of being calmed down, releasing hostages for less than they had asked for, or for nothing at all, and often having their resolve completely broken. Having steeled themselves to violent action by developing a sense of isolation and superhuman bearing, an apparently real connection with a human being can deflate that resolve rapidly.

The revelation that there was no ongoing contact raises a crucial question. Was Monis treated as a disturbed hostage-taker first and foremost — disgruntled employee, angry divorced father — or did his self-proclaimed status as an IS representative alter the way in which the situation was handled? Was a crude rule of “we don’t negotiate with terrorists” — which, in such circumstances, we do — allowed to dictate operational procedure?

“What was the sequence of events in the lethal shooting of Johnson, the storming of the cafe, and the killing of Dawson?”

Were any professional hostage negotiators even summoned? How many of these do Australian police forces have, and how good is their training? Are there clear protocols for hostage situations in place and do they categorise purportedly political events differently to “civil” situations? Do they differentiate between rational, purposeful violent political acts, and disorganised and confused political or pseudo-political acts and actors?

Why were the offers from Muslim community leaders to speak to Monis rejected, when it is a common practice to use in that way figures whom a hostage-taker might respect? Did police distrust the bona fides of Australian Muslims, believing their loyalties would be to Muslims, including Monis, rather than to the wider community?

Most importantly, was there any higher political interference, formal or informal, with police operations? Were police ordered or requested to treat the hostage situation as a wholly political event, and suspend normal negotiating techniques with Monis?

Are police allowing the simplistic right-wing view of Monis — that he was a rational, jihadist political operative — to influence their planning in the case of future such events? Will all events in which the hostage-taker claims a political motive be treated as de facto military situations with a reduced regard for the safety of the hostages?

What is the relationship between the Murdoch press and the higher command of police forces in Australia? Is it as active and corrupted as the relationship between the UK Metropolitan Police and News Corp UK has been shown to be — a relationship that has compromised murder investigations and forestalled investigations of wholesale criminality into the Murdoch empire itself? Do right-wing columnists in the Murdoch Press have an influence on the police, and are they using it, via persuasion or threats, to steer police procedure with regard to crimes with a claimed political content?

We need answers to these questions, firstly for the sake of Dawson and Johnson, and their families. Political opportunists tried to enrol Johnson as a “hero” who had tried to grab Monis’ gun, and died for it. He may simply have been executed — and that may have occurred because of compromised or incompetent police procedure. That Dawson died laying her body over that of a pregnant fellow hostage appears established. That she died from a police bullet does not alter that. But if it resulted from needlessly compromised procedure, then the police are partly culpable for a needless death. To turn anyone killed into a “hero” is a denial of the possibility of victimhood, of innocence, and thus of unconditional worth of any human being. To do so on the basis of clearly false information is an act of disdain. To use it as a means by which future such crises will be shaped and distorted, is actively evil. The unscrupulous love to wrap themselves in a flag whatever the event. They’re happy to use it as a shroud for any number of us, if that’s what it takes.

What’s the point of surveillance when you ignore a terrorist?

Domestic violence is an act of terrorism

What really happened at the Paris siege? I’d love to know your thoughts Guy. Or am I being a bit truthery? http://stormcloudsgathering.com/charlie-hebdo-shootings-censored-video

My question is whether the police were actually in charge.

Thankyou Guy for asking the hard but reasonable questions which have bothered many of us.
With a little distance from the heat of the Sydney tragedy, it is time for an absolutely open honest and transparent analysis of what happened. This is most important if there is to be a less tragic result in the future if another such event should occur.

I was troubled to read that Islamic clerics offers to negotiate were refused. Surely this could have been tried to avoid the terrible loss of life which force produced.
In these seige situations negotiators have been used to attempt a peaceful resolution. Not to do so begs an urgent explanation.

This is not underestimate the difficulty for the police or the complexity of their task but what can we expect the police to do if we or friends or family are caught in such a situation- hopefully not rush in guns blazing.

…and we know Abbott and his apologists are utterly unscrupulous.

“But if it resulted from needlessly compromised procedure, then the police are partly culpable for a needless death.”

No Guy. The blame falls squarely on Monis. It is not shared with the police or anyone else trying to resolve the situation. The police will probably review their processes and may find that they could have done things better, but that doesn’t mean they share any of the blame. What next? Put some of the blame on those hostages who managed to get away earlier?