Labor strips back to basics as Newman pledges big bucks

As Queensland Labor goes door-to-door in an attempt to fight off irrelevancy, News Corp struggles to drive a wedge between Newman and the toxic Abbott government. 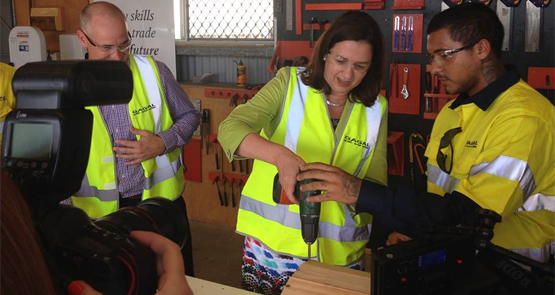 Queensland Labor is attempting to write an election campaign handbook showing how to stage a comeback with no money, no policies, no media support and Buckley’s chance of winning.

Incumbency is a powerful election weapon and Premier Newman is using his whopping majority to marginalise the ALP and render it irrelevant.

Loaded with cash from well-wishers in the coal and gas industries, property developers and other vested interests, the LNP will easily outspend and outgun Labor in the run-up to the election on January 31.

The polls have started to respond favourably too. In its final snapshot for 2014, Newspoll had the ruling LNP and Labor split on 50-50 (two-party preferred) but last weekend the LNP had risen to 53% with Labor trailing on 47%.

Predictably, all News Corporation newspapers in the Sunshine State dramatically highlighted the pro-LNP polls from Newspoll and Galaxy.

Murdoch’s news sheets are supporting the Newman government’s return with the same editorial enthusiasm that they showed in installing him three years ago when he dramatically switched from Brisbane Lord Mayor to Premier.

The LNP’s election strategy is based on Big Promises for Big Ticket items costing Big Bucks. The assumption is that Queenslanders like things Big, as in Big Pineapple, Big Banana etc — and that they will cop a Big Lie as well.

For example, Newman has promised 209,000 new jobs in the next six years, the $16 billion Carmichael Mine in the Galilee Basin, the biggest coal mine in the southern hemisphere, a skyscraper casino on the Brisbane River and the $8.15 billion Aquis casino resort, just north of Cairns.

To many hard-headed operators in Brisbane’s CBD, the grand projects are little more than drawing board fantasies. They argue that final approval is still pending and proof of financing is too vague.

Job creation has emerged as a major theme in Newman’s re-election bid but it is also his Achilles’ heel. At the last election he pledged to lower unemployment to 4% in six years. Instead, unemployment has grown. The jobless rate has risen from 5.5% at the last state election to 7%, giving Queensland the worst figures on the mainland.

Apart from his glaring lack of credibility, the mercurial premier is haunted by his close political friendship with Prime Minister Tony Abbott who cast such a ruinous shadow over premier Denis Napthine when he lost the Victorian election last November.

Desperate to blunt the “Abbott factor”, News Corp reports are claiming that Newman and Abbott are not buddies at all but are at daggers drawn.

“The toxic relationship between the Newman and Abbott governments has been laid bare after the Queensland premier slapped down suggestions of putting GST on fresh food,” wrote Sarah Vogler and Jason Tim last week.

“Campbell Newman yesterday insisted his strident opposition to expanding the GST was clear evidence he was not in lock-step with Prime Minister Tony Abbott.”

Next to a photograph of Newman pulling a glass of beer in a Maryborough pub, the headlines blared: “Newman declares LNP a different flavour to Abbott”, “Bubbling resentment comes to a head as PM’s GST bid falls flat”, “Canberra Bitter”.

So how does the Opposition tackle a government in power with a sweeping majority, the biggest election war chest in Queensland history and a mass media creating a symphony of LNP spin day after day?

ALP campaign director Anthony Chisholm has drafted a team headed by former federal treasurer Wayne Swan (himself a former state secretary), the Australian Workers Union faction headed by Bill Ludwig, his son Senator Joe Ludwig, and other Labor bigwigs from interstate, academia and union-supported think tanks. Federal Opposition Leader Bill Shorten, a former AWU national secretary, knows the importance of Labor achieving a “back from the dead” result in Queensland and he will campaign whenever needed.

Abbott, on the other hand, won’t be welcome. Already deeply unpopular over his horror federal budget, Abbott has turned septic after setting loose the GST genie despite an election promise that a rise in the consumer tax was not on his agenda.

With little money to spend on advertising and sheepishly in support of many of Newman’s development and revenue-raising plans, Labor has been obliged to return to election basics.

Its carefully selected local candidates will campaign door-to-door, in suburban streets, shopping centres, clubs, pubs and workplaces — all the things Labor used to do before it was hijacked by PR consultants, marketing types, focus groups, spin doctors and Flash Harrys and Harriets.

We’ll know in 18 days whether an old-fashioned Labor campaign has worked.

Ashgrove is looking more like the new Brisbane red-light district – with all the money Manuel’s splashing out, to get laid there.

[The assumption is that Queenslanders like things Big, as in Big Pineapple, Big Banana etc]

Let’s hope Ashgrove’s constituents have a price far higher than what Newman is promising to pay for their favours.

Zut: Are you suggesting that they/he are/is haggling over the price – having already established the nature of the relationship?

And of course, there’s a studious avoidance of the biggest lie of both Newman and Abbott: they both claim to “believe in the science of climate change”, but they both expend a large chunk of their personal time and energy, enthusiastically flogging as much coal as possible.