Telling the difference between friends and enemies just got harder after Anonymous decided to take on the jihadist enemies of nations that have, in the past, tried so hard to thwart Anonymous. 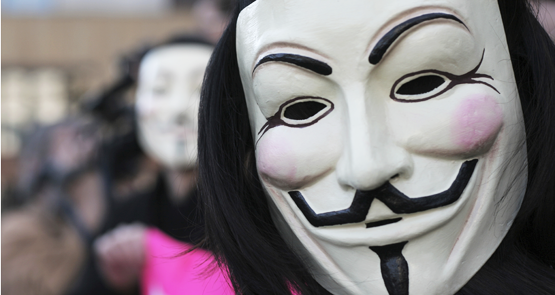 The announcement from hacker group Anonymous that it would be joining the war on terror was one of the more unexpected responses in the wake of the Paris shootings. Described in turns as both the internet’s hate machine and crusaders in the fight for freedom of information and expression, Anonymous was eager to demonstrate its commitment to the protection of free speech in the face of brutality. The group launched the #OpCharlieHebdo campaign, and has already claimed victory over a number of allegedly jihadist-linked sites and supposedly exposed a number of terror-linked accounts on Twitter. It would seem state leaders of free-speech loving nations have found an unexpected ally in a group with a rich history of anti-authoritarian demonstration.

To describe Anonymous as a unified group could be misleading; it would perhaps be more helpful to recall the obviously influential scene from the Wachowski siblings’ film adaptation of Alan Moore’s graphic novel V for Vendetta where the people of London march on Parliament under the cover of Guy Fawkes masks — the same worn by members of Anonymous — helpfully mailed to them by the central terrorist/freedom fighter/swashbuckling enthusiast. In this sense, Anonymous functions as a banner to rally behind, an amorphous series of ideologies that can stretch to encompass any number of vendettas of their own.

Anonymous infamously flexed its digital might with “Operation: Payback”, a series of distributed denial of service (DDoS) attacks launched against companies including PayPal, Visa, MasterCard, the Motion Picture Association of America and Bank of America for a hodgepodge of ideological reasons. The DDoS attacks were mostly enacted as reprisals; against media companies for trying to shut down The Pirate Bay (a popular file-sharing site) and against certain financial institutions that refused to process transactions pledging money to WikiLeaks.

DDoS attacks work by flooding specific IP addresses with immense amounts of irrelevant internet traffic (in this case using a freely available network stress-testing program) until the site is overwhelmed to the point of paralysis. Picture a horde of doctors whacking your knee with reflex hammers until they break your leg.

While this may seem about as damaging as flipping the “Closed” sign on a shop door, the impact on some of the businesses targeted was significant. PayPal’s legal team said the shutdown cost the company more than 3.5 million pounds in lost sales and expenses, with other companies reporting losses in the thousands, or even tens of thousands — hardly an amount likely to bankrupt any of the corporations targeted.

Unfortunately for many would-be hacktivists, they’re not the only ones who know how this game is played.

The Joint Threat Research Intelligence Group (JTRIG — they can’t all be SPECTRE), a division of the suspiciously benign-sounding Government Communications Headquarters, is a formerly secret British spy unit revealed by the Snowden leaks to have apparently been created for the primary purpose of cyber attacks and disruption. One of the leaked documents, obtained by NBC News, revealed that not only was the British government launching DDoS brute force attacks, they had turned the technique on Anonymous itself in what amounts to a quintessentially English act of irony.

Infiltrating internet chatrooms, undercover JTRIG agents — anonymity cuts both ways — identified hackers allegedly responsible for attacks on government websites before bombarding the forums with enough white noise to keep them down for days. After this, the documents — included in a PowerPoint presentation showcasing JTRIG’s effectiveness — claimed that the agents had flooded the personal social media accounts and emails of suspected hacktivists in an attempt to scare them straight. According to JTRIG, it worked — the next slide stated that in just one month around 80% of the people messaged were inactive in the chat rooms, hackers or not. Interestingly, the people responsible for this operation chose to give it a name that would seem fitting if spoken from the unmoving lips of a Guy Fawkes mask on YouTube — “Rolling Thunder”.

This, perhaps, is the weapon that Anonymous is promising to deliver in the war on terror. The fact that a top-secret government agency is fervently honing the very methods that Anonymous is synonymous with in the war for the web suggests that, as vague and over-the-top as their rhetoric may be, these tools are useful for more than just messing with Gene Simmons’ official website. Certainly, the FBI wasted no time in linking last year’s Sony leaks directly to the North Korean government, saying that the bureau had “observed significant overlap between the infrastructure used in this attack and other malicious cyber activity the U.S. government has previously linked directly to North Korea”. Such an attack, launched with the express purpose of intimidation and coercion, echoes the alleged JTRIG assault on the forums of suspected hackers — though on a more frightening scale.

Although the damage done by disabling an extremist site is more difficult to gauge than that of a drone strike, disrupting communications and curtailing propaganda has a long history in warfare. Public identification of users visiting sites linked with jihadist movements, too, seems at first glance to serve a useful purpose in the struggle against what is increasingly being labelled “lone wolf terrorism” — but the potential of innocent internet-users to have their personal details splashed across social media is alarming.

In the face of utter brutality, it’s understandable that a group of frustrated individuals would seek any means to fight against what they see as an unspeakably violent assault on the ideas that they value most. But in a nameless fight between nameless foes, there’s no way of telling the extent of collateral damage that a group of zealous hacktivists could do from behind the safety of a keyboard.

Is it out of the question to substitute the word “pinky” each time digit is mentioned?

Make no mistake – the Internet Hate Machine doesn’t care what you believe or who you serve. But you start trying to suppress folks from talking freely, and you can expect their full, unbridled wrath. Until they get bored – only the diehards are still going after Scientology.

Is it too soon to say that the Net has had its day? Given that it relies on BIG severs, in countries with dubious notions of freedom (eg the Benighted Staes),identifiable and dependent on standard amenities like… electricity.. are as vulnerable to malign state intervention unless they become,ummmm more amenable?

Chris, read my response to the article:
Media briefs: forget 18C … sharing the spoils … all is forgiven …