Queensland LNP has a message on jobs ... parliamentary staffers on the move ... Rupert and Voldemort, are they buddies?

Bypassing the filter in Queensland. Twitter is increasingly seen as an important medium for politicians to get their message to voters without the pesky media getting in the way, and in Queensland the LNP has obviously got the message, and stayed on it this past weekend. At least nine LNP MPs and candidates tweeted the same message and photo yesterday and today — all plugging the Newman government’s jobs plan. With a few minor adjustments to the wording, the tweets are almost identical. While we know that a unified message is important in an election, it probably shouldn’t be quite so monotone: 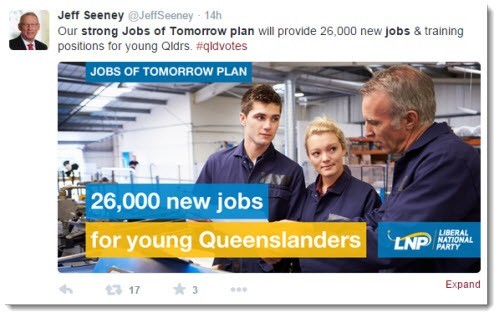 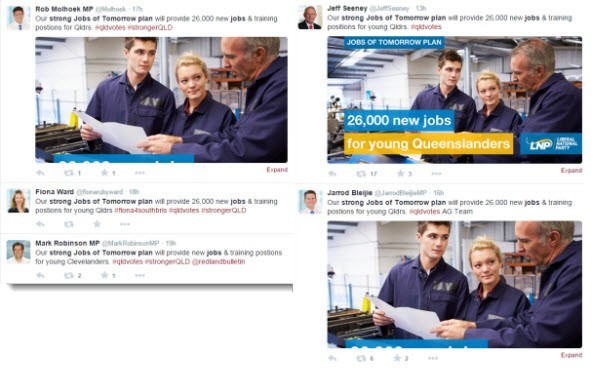 Staffer movements. We hear from a tipster that Liberal MP Kelly O’Dwyer has a new staffer with an interesting history:

“New parliamentary secretary to the treasurer Kelly O’Dwyer has been engaging in a bit of bipartisanship hiring a former ALP member, James Radford, as a staffer. Mr Radford is now an executive member of the infamous Melbourne University Liberal Club.”

O’Dwyer has a long connection with the Melbourne University Liberal Club. In 2012, when the university’s student union refused to spend money on a wreath to be laid at the Shrine on ANZAC Day, O’Dwyer donated one to be used instead. We called Radford to ask if he had been a member of the ALP, but he told us he had no comment to make. In other staffing news, Senator Ricky Muir is advertising for both a media adviser and an electorate officer to be based at his new office in Sale in Gippsland. Muir has been having trouble holding on to staff in his first six months as a senator — hopefully someone will be charmed by the fresh air of Sale and access to great 4WD-ing tracks and take up the job.

Socceroos and soccer boos. The Asian Cup got underway on Friday night, with the Socceroos managing to beat Kuwait, after an “Opening Ceremony” that we hear left a bit to be desired. While the 25,000-strong crowd got to enjoy a decent performance from the Socceroos, we hear from a tipster that they were less keen on Prime Minister Tony Abbott. Abbott was in attendance to help kick off the tournament, but his reception from the crowd was less than warm. According to our tipster, “I was at the ground and the booing was really loud — even more loud than the booing for the Kuwait player who was faking an injury”. We also hear that said booing didn’t make it to the Fox Sports broadcast of the match, possibly because the Opening Ceremony was too boring to broadcast the whole thing, or maybe they didn’t want to hurt the PM’s feelings.

Rowling, Murdoch and He Who Must Not Be Named. The old buffer, Rupert Murdoch, (and his fellow traveller at Fairfax Media, Paul Sheehan) has laid blame for the events in Paris last week at the feet of the entire Muslim community. Murdoch gave us his views on Twitter at the weekend. Sheehan passed on his views in a column in the Fairfax tabloids this morning. Sheehan’s ravings are less well known compared to the tweetings of the 83-year-old Murdoch: 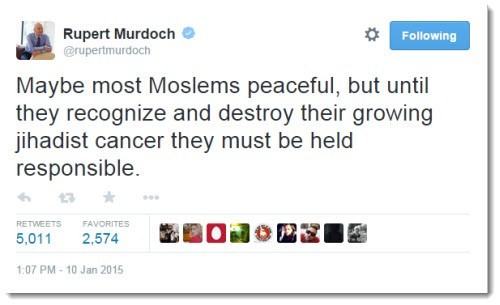 This got us wondering if Murdoch had talked about this with Saudi Prince Al-Waleed bin Talal. Bin Talal, who is Muslim, is the second-largest holder of shareholder votes in News Corp and Fox News and proved himself to be a solid ally of the Murdoch clan. Bin Talal’s support was a key factor back in 2004 when US cable mogul John Malone tried to wrest control of News Corp away from Murdoch. Although Stephen Mayne argued in Crikey that bin Talal finally turned against old Rupert at the 2014 News Corp AGM, most media analysts believe that bin Talal has never voted against Murdoch in 17 years as a shareholder in the various companies. The Murdoch empire is also a shareholder in the prince’s Rotana Arab media group, and Al-Waleed also owns 3% of Twitter, so Murdoch’s tweets are probably helping share prices. The Prince and his friends must be “good” Muslims — next thing Murdoch will be tweeting “I have friends who are Muslim”.

Author J.K. Rowling’s reaction to Rupert Murdoch’s tweets about peaceful “Moslems” and the “growing jihadist cancer” has made headlines around the world in the past 24 hours, after she tweeted:

But fans of Rowling’s Harry Potter series tell Crikey that we shouldn’t be surprised that the author isn’t Murdoch’s biggest fan. An ongoing plot line of the books and subsequent films includes the tabloid paper The Daily Prophet and its unscrupulous journalist Rita Skeeter “bugging” Harry and his friends to get stories and tarnishing his reputation so that the wizarding public won’t believe his warnings about Lord Voldemort. Sounding like a multi-national media company you know? In later books, the Prophet is also used as a mouthpiece for Harry’s evil nemesis — it’s sounding more and more like Rowling’s problem with Murdoch and his tabloids started long before the weekend.

What is a Mailkimp? In what seems to be more than a little bit of bad taste, a Sydney pub is advertising a “Serial Trivia” night, where punters can compete in testing their knowledge on the true-crime podcast series broadcast by NPR late last year. The series investigated the 15-year-old murder of a teenage girl in Baltimore, and has been accused of crossing many ethical boundaries in its treatment of the people involved and reporting of the case. Ms Tips thinks turning the murder of a real person into trivia crosses more than a few ethical lines.

Danby saving the world. Speaking of bypassing the filter, Labor MP Michael Danby has taken to posting essays about missing his local bookstore, a French restaurant and a spiv real estate agent in public in his local electorate. The full missive can be seen here, but we’re wondering — is his media adviser on holiday? 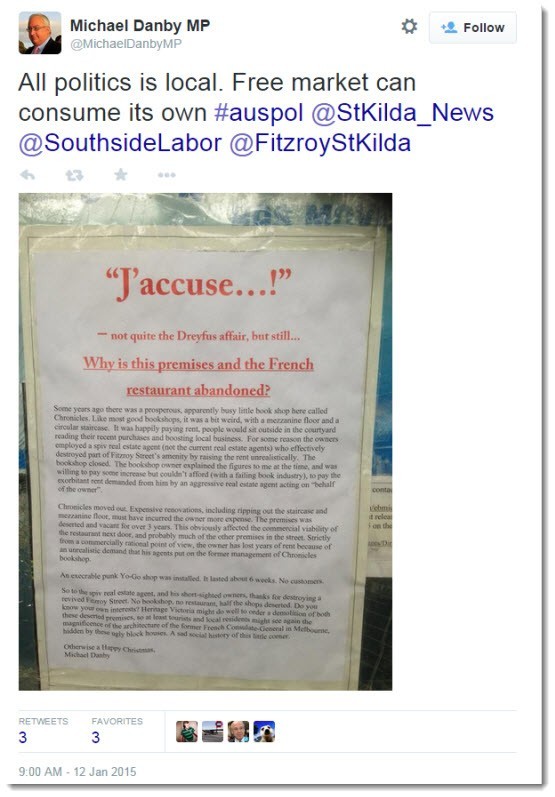 What’s Rupert got on bin Talal?

Could definitely hear the booing of Tony on the Fox Sports coverage of Aus v Kuwait. It was during the line-up just before national anthems, so wasn’t part of the “Opening Ceremony” as such.

26,000 new jobs? That’s merely fulfilling projects promised in his electorate of Ashgrove – at which Newman is currently throwing $$$$$ in desperation to be re-elected.

Yeah Rupe, I can see sitting here in Perth that I should have realised three deluded, alienated individuals of the five million Muslims in France would shoot up a grubby anti-Muslim and anti-Semitic magazine I’d hardly heard of and gone there and stopped them. My bad. And Rupe, I guess you should have noticed the criminal activities of some of your carefully selected and supervised employees and stopped them. Your bad. Sorry, misspelt that. You’re bad.