Twitter awkwardness over Charlie Hebdo... and other media tidbits of the day.

Louise Mensch watch. In the midst of fraught debate and some bad feeling over multiculturalism, free speech, etc there is one thing that brings us all together: what an utter moron former UK Tory MP Louise Mensch (nee Bagshawe) is.

Followers of Menschwatch have delighted in her exploits before. The ex-chick lit novelist was Tory MP for Corby for two years after 2010, before quitting to go to New York — at which point the seat went flying back to Labour in the byelection. From the Big Apple, she now gives her 90k followers the benefit of her wisdom — describing British Sikh journalist Sunny Hundal as Muslim because “he tweets like a Muslim” and summarising the roots of the Greek crisis (“nasty times for a nasty people”).

Last year she outdid herself, claiming that the term “Zionism” was anti-semitic and that out of solidarity with Jews and Israel, she would block anyone who used it. “Even Theodor Herzl?” asked someone, as Twitter crossed its fingers and hoped. ‘Who’s Theodor Herzl?’ she asked before affirming that, yes, if he used the word Zionism she would block him.

Mensch was all over the Charlie Hebdo massacre, not surprisingly. She perhaps thought it was less lethal than it was — because as it turned out, she believed Charlie Hebdo was one person, not the name of the weekly:

When people tried to helpfully point out her error, she replied somewhat crossly to these enemies of freedom:

Before finally effecting a save of sorts:

Hah! Charlie Hebdo would have loved it — a Tory git who automatically assumes that the magazine was one man and his servants, not a collective of grubby French leftists.

Thanks, Louise. Don’t need to say, don’t you ever change, because people like you never do. — Guy Rundle

Publisher’s regret. Among the shocking footage of the attack on the Charlie Hebdo offices in Paris last week is the video of a Paris police officer being shot at close range by the gunman. The video was shared widely in the news and social media, and depicts a masked gunman fatally shooting 42-year old police officer Ahmed Merabet at close range.

Associated Press has reported the man who filmed the amateur video-engineer — Jordi Mir — now regrets sharing the footage, saying he never expected it to be broadcast so widely. Mir told the Associated Press he shared the video on social media out of a “stupid reflex” and fear.

Mir said he left the video on Facebook for fifteen minutes before thinking the better of it and taking it down. However, the footage had already been shared across the networking site and someone had already uploaded it to YouTube. Less than an hour after Mir removed the video from his Facebook page, it was circulating across news programs on TV.

Mir wanted Merabet’s family to know that he was sorry for sharing the video. He says he turned down offers to buy the footage and that he wanted media organisations to blur Merabet’s figure before running it. Many, however, just ran the unedited footage without permission. — Crikey intern Mahalia Dobson

Williams to CAL. Former News Corp CEO Kim Williams is the newest independent director appointed to the board of not-for-profit rights organisation Copyright Agency Limited, which is responsible for collecting and distributing royalties to Australian creatives. “Kim’s expertise and empathy for the creative industries will deliver real benefits to our members and his knowledge and strategic input will complement the board’s current strengths,” CAL chair Sandy Grant said in a statement.

It’s the latest of a string of appointments for the former Murdoch man. He joined the board of property group the Executive Channel, and in February last year became an AFL commissioner. — Myriam Robin

Video of the day: Heard about the non-Muslim in Birmingham? You didn’t, because he’s not allowed in! At least, according to Fox News … 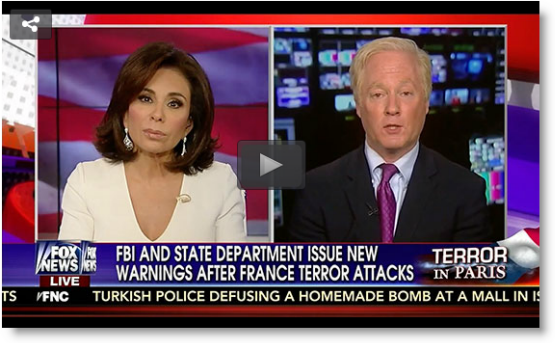 If it wasn’t so serious, it would be comedy gold watching Fox News these past few days. I can only last a few minutes before my urge to throw something at the TV leads me to change channels. I do have to ask though, whats that brunette doing on there? I thought they only employed blondes?

Surely this is standard Fox News fare, hardly worth a mention.

Here’s an idea, Crikey: publish a story when Fox reports something (anything) accurately.