Cycling: how do Australian cities compare with Paris?

Cycling along the Seine may have a certain je ne sais quois, but Australia's inner city cyclists are keen to close the gap. 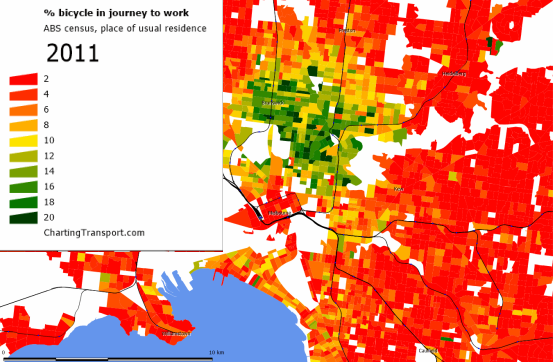 Danish cycling advocate and CEO of Copenhagenize, Mikael Colville-Andersen, noted with delight last week that the mode share of bicycles in Paris doubled over the last 10 years: “Ok. Wild. Paris’ modal share for bikes inside the Peripherique is 8%. Up from about four bikes in 2004. Infra, bike share, traffic calming.”

While his readers pointed out the figure only applies to work trips, it’s nevertheless an impressive number. At first glance Australian cities seem to pale in comparison.

In metropolitan Melbourne, for example, bicycles account for only 1.6% of all journeys to work (i.e. commutes). The corresponding figure for Sydney is just 0.9%.

But that comparison is misleading. The Paris figure only applies to the area within the Boulevard Périphérique. It’s 34 km long, so it encloses an area of roughly 95 sq km. That’s a pretty small area given urbanised Paris covers 2850 sq km.

When the comparison is made against similarly sized parts of the inner areas of Australian cities, they come up surprisingly well relative to Paris. Melbourne in particular looks quite good.

As the image above shows, cycling’s mode share for the journey to work exceeds 10% in many neighbourhoods of inner city Melbourne. The inner north is clearly a cycling hotspot; bicycles account for more than 20% of work trips in some precincts and the increase over 2006-11 was phenomenal.

These are small areal units though, so considerable variability is expected. But even when examined at the level of whole suburbs, cycling is very strong in inner Melbourne.

Still, each suburb is smaller than the area cited for Paris. I don’t have data for exactly the same area as enclosed by the Périphérique, but cycling’s mode share is an impressive 5.3% of work trips by residents of the Inner Melbourne Region.

That’s pretty impressive given the region is much bigger than the Parisian example; it covers 142 sq km, stretching from Elsternwick in the south to Coburg in the north and east-west from Kew to West Footscray.

It’s also despite the region having a smaller population, lower employment and population density and, importantly, fewer constraints on car use, than central Paris.

Nor is high bicycle use for the journey to work in inner Melbourne due in any way to a successful bicycle sharing scheme as Colville-Andersen says is partly the case in Paris.

It’s mostly down to (a) the demographics and values of those who choose to live in the inner city and (b) improvements in cycling infrastructure. Providing the latter is helped by the relatively high proportion of inner city Melbournians who work in the same place i.e. in or close to the city centre.

Although cycling is more popular in Melbourne than in other other large Australian cities, it also has a high share of commutes in the inner city of the other major capitals (although at the metropolitan scale, cycling does best in Darwin and Canberra, both comparatively small).

Going Dutch: look to the Netherlands to encourage cycling in Australia