Last week's election of Maithripala Sirisena in Sri Lanka is yet another blow to China's economic prosperity, along with falling commodity prices and competition from regional rivals. 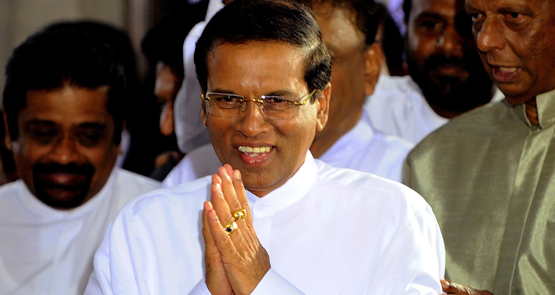 Within the high walls of Zhongnanhai, the sprawling Chinese Communist Party leadership compound in central Beijing, there would have been conniptions after Maithripala Sirisena ran over the top of incumbent Mahinda Rajapaksa in last Thursday’s Sri Lankan presidential elections. Democracy had punched a hole in the CCP’s Indian Ocean strategy, commonly known as the Maritime Silk Road.

Strategically important Sri Lanka had been emerging as the biggest and shiniest of China’s “string of pearls” — a series of friendly ports that ring the Indian Ocean. It’s a strategy that has been supercharged by current leader Xi Jinping since he ascended to the top of the CCP in November 2012.

Rajapaksa, who scored a spectacular own goal by calling an election two years early, had drawn Sri Lanka ever closer to China and, in 2009, China overtook Japan as Sri Lanka’s biggest foreign investor. Rajapaksa has been accused of corruption in the process.

But Sirisena has very different views on China. A central theme of his pitch to voters was that if the relationship continued to develop as it was, within six years Sri Lanka would “become a colony, and we would become slaves”. This is a fear that is increasingly echoed around the region.

Although only time will tell how much Sirisena will temper Sri Lanka’s financial relationship with Beijing, it’s clear he is keen to re-diversify the country’s foreign investors. The “loss” of Sri Lanka is the latest in a series of regional blows to China. The political and economic opening up of Myanmar has seen China’s rivals — Japan, South Korea and India, as well as other regional heavyweights like Singapore — pour billions of dollars of investment into the country. Cambodia is also increasingly hedging its bets, with its own recent embrace of Japan a fresh element in a long-term game of playing China off against Vietnam.

It’s worth noting that the change in Sri Lanka’s government will require some diplomatic heavy lifting from the Abbott government, which had been too quick to embrace the Rajapaksa administration to help it pursue its controversial refugee policy. This was despite Rajapaksa’s rampant cronyism and mistreatment of the minority Tamils, some of which were returned to the country after attempting to flee to Australia. The embrace of regional authoritarian leaders and despots — including, most egregiously, Cambodia’s Prime Minister Hun Sen — for purely political reasons is becoming something of a grubby hallmark of the Abbott administration.

Meanwhile, China’s bid to regain what it clearly sees as its rightful influence over its “backyard” is looking far more challenging than it was a few years ago, especially with the backdrop of the regime’s aggressive prosecution of its controversial claims in the South China Sea.

“[Xi Jinping] is acting awfully like someone who is increasingly fearful of both his own party and the Chinese population.”

More broadly, the surprise change of government in Colombo was just the latest element in what has been a very ordinary start to the year for Xi. While foreign policy is becoming increasingly important to China, it is still very much subordinate to internal matters and here things are decidedly uncertain.

China’s economy is slowing. If it hits last year’s 7.5% GDP growth target, it will be a fluke, and the Communist Party’s annual December Central Economic Work Conference was reported to have set a lower target of 7% for 2015, a number that is likely to be officially adopted. But real world activity and other economic data appear to indicate that things are far worse, and there are now growing concerns that deflation may be setting in. Whether the government, with its promise of fresh reform, can avert economic shock is as yet unclear but the likelihood that it may not be able to is rising rather than receding.

Australia is already feeling the economic pain of the collapse in iron ore prices, as well as plunging prices for coal and LNG. The Pollyannas of the sector had been hoping the New Year might bring a rally in commodity prices, but this proved short-lived as prices fell 1.1% on Friday to slip below the psychological US$70 per tonne mark once more on Friday. There is likely more gloom ahead, with the two-week Chinese New Year shutdown fast approaching.

For all the hoo-ha around the Australia-China Free Trade Agreement — a document that, despite government spin, has yet to be finalised or signed off by both sides — the China “gold rush” appears to be almost done. Australia, for too long happy to be a quarry, has come late to the party. Foreign direct investment into China is stuttering, with the country pulling in just US$106.2 billion in FDI in the first 11 months of 2014, according to the Ministry of Commerce, up just 0.7% from a year earlier. Investment from Japan into China continued a steady decline, dropping 39.7% from a year earlier, while FDI from the United States fell 22.2% and the European Union down 9.8%.

But facing a growing range of problems, Xi has assumed the default strategy for autocrats: attack. Now he is acting awfully like someone who is increasingly fearful of both his own party and the Chinese population. His anti-corruption campaign continues to target his political enemies, with the trial of his nemesis Zhou Yongkang looming next month as a major political test.

More disturbingly, human rights under Xi are now, by any calculation, going backwards. Some estimates put the number of lawyers, activists and dissidents who have been locked up by Xi at 500. There is an ongoing campaign against Christians in the wealthy province of Zhejiang and Catholic Bishop Thaddeus Ma Daqin in Shanghai remains under house arrest for not toeing the party line. Muslim Uyghurs in Xinjiang province are having their own religious and cultural freedoms — such as they are in China — stripped away and are being subjected to “mass trials” in public stadiums not seen since Mao Zedong’s Cultural Revolution. Tibetans continue to set themselves on fire, universities are being targeted for being too independently minded, and censorship is increasing.

The promise of Chinese capitalism leading to political reform has proven, resoundingly, to be a chimera.

The resources sector has little choice, but Australian business people who are sensibly looking to expand into Asia have many options. Before leaping in, searching for pieces of silver, they should at least ask themselves the questions that the Australian government doesn’t seem to want to: is China — or indeed any other totalitarian regime — the sort or country they want to do business in?