Recovering crash data from a sunken plane is no mean feat and, despite persistent criticism, the Indonesian authorities have so far done a very reasonable job. 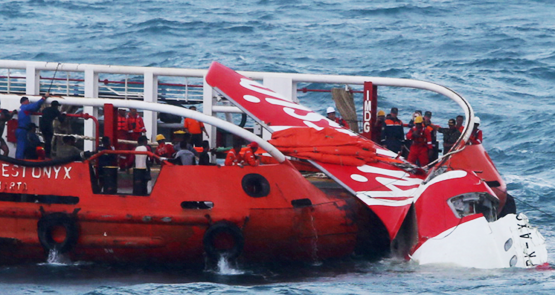 Later today, it’s possible that one or both of the “black box” data and voice recorders from the jet that abruptly suffered a loss of control between Surabaya and Singapore, killing all 162 people on board, will be recovered.

If the recorders haven’t been damaged and their data is easily read, vital questions as to what was heard and said in the cockpit, what was done to the airframe (i.e. the mechanical structure of the plane), its systems, and which pilot applied what control inputs, will all be answered.

However, this is also an accident which will accelerate moves to ultimately replace hard-to-find black boxes with live data streaming, so that the position and performance of the systems, and the pilots using them, will be known the moment a jet goes down.

Black boxes don’t float, and sometimes don’t work at all, for some major reasons. Mostly because engineering a piece of equipment sturdy enough to withstand the kind of impact that shreds an airliner to tiny melted and torn fragments is very difficult. One proposed solution is live-streaming flight data to operations centres, currently being trialled by Qatar Airways.

Although “live data” is fiercely resisted in some quarters — notably among pilots concerned about the misuse of recordings of casual pilot conversations — it is coming.

When an airliner crashes, the purpose of the investigation isn’t to lay blame (although this is sometimes unavoidable) but to identify any overlooked or unforeseen safety issues that could affect other airliners and save lives or eliminate such risks by then changing flight procedures (unique to each type of jet) or training, or replacing or modifying parts of the structure or systems.

Instant access to crash data, as well as a better starting point for searching for any survivors, would have obvious benefits. It wouldn’t necessarily hasten the recovery of the dispersed bodies and wreckage from the AirAsia A320 — given the difficulties of stormy seas, high winds, and fast, silt-laden currents. But we would, by now, have reached a sound understanding as to why control was lost of flight QZ8501, and what could prevent those circumstances bringing down any more flights.

There has been an ugly outbreak of chauvinism over the performance of the Indonesian authorities in finding and recovering wreckage and bodies from this crash. It’s true that some of the official responses to the accident have been evasive, contradictory and just plain wrong. But, Indonesia doesn’t have that problem to itself.

Anyone who has followed the revelations about the lack of integrity, diligence and competency of Australia’s air safety regulator, the Civil Aviation Safety Authority, or its safety body, the Australian Transport Safety Bureau, in relation to oversight and crash investigation concerning the Pel-Air incident of 2009 would know how poorly our agencies have performed. Indeed, had a flight like AirAsia QZ8501 come down in the Tasman Sea, Bass Strait, or some other stormy or shallow fast-moving waters like those of the Java Sea, where it crashed 15 days ago, it is very likely the situation would be the same as it is in Indonesia today.

In 2013, Indonesian investigators conducted an exemplary and fearless inquiry into a Lion Air sea landing incident near Denpasar by that country’s largest domestic carrier. Given the rubbish that came out of the ATSB over Pel-Air, our collective, sneering chauvinism concerning Indonesia is both embarrassing and unjust in comparison.

The physical search and recovery efforts made by Indonesia, and the skills applied to those tasks, were as good as could be expected anywhere in the world. The people skills of authority figures in dealing with media inquiries, however, were not so good.

Would there be any use in this live streamed data during an in flight incident? Would having people on the ground able to view a live stream assist in diagnosing problems and formulating effective responses?

I just wonder. I have no experience in the area of aviation but am a computer engineer and using live logs of data is a invaluable tool for fixing problems in production systems.