The journalistic ethics around republishing the Charlie Hebdo cartoons are delicate, and Australian editors didn't take their responsibilities lightly. 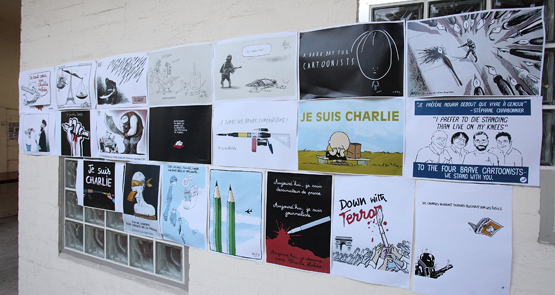 The Australian press has shown more willingness than most in the Western world to publish images of some of Charlie Hebdo‘s most controversial covers in its reporting of Tuesday’s massacre.

In the United States and the UK, almost all major publications and broadcasters chose not to run images of the most controversial covers from the French satirical magazine, whose cartoons and writing on religion are believed to have played some part in the fatal shooting of several of its cartoonists and employees in Paris.

But The Australian newspaper, the ABC and Fairfax’s websites have all shown some of the magazine’s covers on Islam and the Muslim prophet Muhammad in some form.

The Australian has published a photograph of a protester holding up the controversial edition of Charlie Hebdo that prompted the firebombing of the paper’s office in November 2011. The cover depicts the Muslim prophet Muhammad on the front cover as a “guest editor” telling readers they’ll laugh or get the lash. Meanwhile, the ABC has displayed a collation of the newspaper’s most controversial covers on Islam, stitched together at a protest. Fairfax took a similar tack online, but didn’t feature the most controversial images in its print editions today.

In broadcast, Sky News aired images of the most controversial cartoons, but only after guest PM Live presenter Derryn Hinch insisted on it. “I arrived at Sky News yesterday … to be told of an executive decision: Australia’s major TV news network would not be airing the controversial cartoons from the satirical magazine,” he wrote in a blog post this morning. Hinch convinced Sky management to let him air “half a dozen” of the most contentious images, telling viewers the responsibility for airing the images should rest with him.

Crikey understands that as coverage of the massacre dominated newsrooms yesterday, many editors scrambled to understand what exactly about particular covers was offensive, as many of them are somewhat esoteric and all are written in French. There was a reluctance to use the covers in early coverage until the exact source of their outrage was understood, but this gave way to more considered editorial judgements later in the day.

At the ABC, head of newsgathering Craig McMurtrie told Crikey there was no ABC editorial policy against displaying the covers. “There has been no edict or direction to program-makers and editors not to air the covers, but we have asked them to make sure any use isn’t gratuitous, is in context and is editorially justified.” Some of the covers, he says, were run on the ABC’s TV news bulletins, “but [we] put them in context by demonstrating that no major religion or public figure was off limits to Charlie Hebdo.”

The decision at The Australian was informed by concern for both the safety of News Corp staff as well as the country’s legal framework around such illustrations, editor Clive Mathieson told Crikey. He also said editors at the Oz were reluctant to include covers if they would only confuse readers. “We wondered whether the covers made sense without a detailed explanation. We can’t assume all our readers speak French. With some of them, we’d have to explain why they were offensive.” 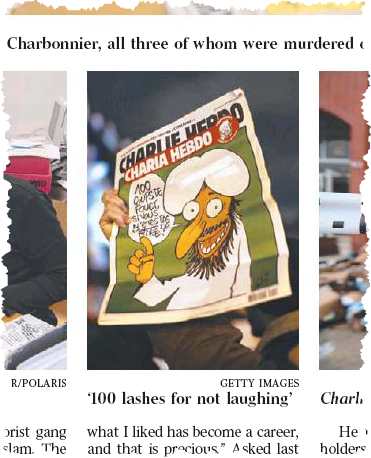 In addition to a photo of Charlie Hebdo’s most recent cover on page 7, The Australian ran what is perhaps the French newspaper’s most controversial cover on page 9 — the “Charia Hebdo” edition, as held up by a protester. “But we ran it small,” Mathieson said. “We didn’t want to be unnecessarily offensive or provocative. And we didn’t need to run those covers to make our point about free speech.”

Thought was also given to the Racial Discrimination Act. “Under section 18c of that act, so many of those covers would have been actionable,” Mathieson said. “So we had to take that into consideration as well.”

Fairfax’s major papers did not run Charlie Hebdo‘s most controversial covers in its print editions this morning. Sydney Morning Herald news director Judith Whelan told Crikey there was no blanket ban on the cartoons:

“But with everything in the paper, we look at how our audience responds. [Charlie Hebdo] had a different audience to us. It was a deliberately provocative, satirical magazine. It was terrific because of that — and I’m supportive of the publication. But we’re a mainstream paper with a broader audience. We make editorial decisions every day weighing up whether a segment of our audience will be offended by things. For example, we have a policy of respecting the wishes of the Indigenous community with regards to images of the dead.”

On this reckoning, some of Charlie Hebdo‘s cartoons, particularly those depicting Muhammad, were deemed unsuitable. Asked whether the SMH‘s readers could hope to understand Charlie Hebdo‘s place in France without seeing the cartoons, Whelan said those who read the SMH’s coverage “would have a very good idea of the editorial direction of this magazine”.

“We described some of those the cartoons in great detail,” she said.

Age news director Mark Forbes said the paper has been weighing up how to deal with such images ever since the Danish cartoons of the prophet sparked global protests and violence in 2006. “We decide on a case-by-case basis,” he said. “In terms of our coverage, we certainly did include some images from the magazine that had been subject to some controversy. But we made the decision we wouldn’t run the controversial images for the sake of doing so.”

“We support free speech, and for the shots we did run, we may yet get a negative reaction. But we don’t want to by default adopt a political statement that someone else has made. We didn’t think there was a strong enough case for doing so.”

Hinch told Crikey that Sky News’ decision had been based in part on fears for the safety of its staff. But he thought it was hypocritical for publications and broadcasters not to air the images. “We all ran the cartoons attacking the terrorists, but didn’t show what upset them,” he said. Many publications did display the cartoons in the form of images from protests, but Hinch describes this as a “cop out”. “Every paper in the world should be showing these images on the front page. Otherwise the terrorists win.”

On his broadcast yesterday, Sky blurred the photos of the policeman who was murdered as the gunman escaped. Hinch says he can understand editorial decisions like this. But the cartoons were a “bigger issue”.

“For 20 years, Charlie Hebdo has been running provocative cartoons, some of which I would find offensive. Some were about the royal family, politicians, Putin, the pope. The only time we decide to be coy is when there’s a threat. And I think that’s wrong.”

Charlie Hebdo editor holding this cartoon in front of his bombed office was killed over this – true media courage, don’t let his cartoons die with him https://commentisfreewatch.files.wordpress.com/2015/01/bombed.jpg

As an aside, Derryn thinks Sky is Australia’s major news network?? Seriously??

your post in a knee jerk & simplistic. This incident doesn’t have anything to do with freedom of the press. Read Helen Razer’s piece in today’s Crikey along with the below associated post by ‘Jim’, which puts the whole affair in perspective:

“A lot of people won’t like it, but Helen Razor is right on the money. The West has misunderstood the motivation behind this attack and has blown out of proportion the meaning behind it and attributed more value to it than it deserves.

These terrorists were not targeting “our liberties”, “our way of life” or even freedom of speech. Or anything nearly as significant.

They are extreme adherents of Islam who targeted ONE small newspaper that repeatedly humiliated a religious figure they (and their followers) revere. They didn’t hit France’s main newspaper (Le Monde) or the French President or a French government building or the Arc de Triomphe or the Place de la Republique or any other representative of liberty and free speech.

They attacked a newspaper that ridiculed something they hold dear. They called out the names of their victims to make sure they killed the people they were specifically after.

The West is making their actions seem more significant or more heroic than they were”.

Are you living on Planet Obstruficate instead of Planet Earth Kevin ?

“These terrorists were not targeting “our liberties”, “our way of life” or even freedom of speech. Or anything nearly as significant.”

Oh yes they were. They just started small – “Shoot one, educate 1000”. The result has been a new bout of self-censorship on the part of Western media.

“They attacked a newspaper that ridiculed something they hold dear. They called out the names of their victims to make sure they killed the people they were specifically after.”

Oh good, so that makes it all right…