Waiting list numbers explained. Yesterday we ran a tip on the Queensland government’s “Wait Time Guarantee” policy, which had been advertised on television up until Wednesday night. The ads made various claims about wait times for elective surgery going down under the Newman government, which our tipsters found very hard to swallow.

After deadline we got a response from Queensland Health about those claims. While Queensland Health could confirm that the ads were correct in claiming that no one was on the overdue list for a cochlear implant (according to the department there were 22 people on the waiting list at the end of last year). We asked how many people were on the waiting list for all elective surgeries and how many were overdue. We were told:

The tip got quite the response from our readers in Queensland, who tell us it’s the wait to see a specialist that really adds to wait times:

“If you check with the medical profession you will find that Qld Health is controlling who gets to see surgeons because until a patient does they cannot get on a waiting list. Hence waiting list numbers have been reduced! You could also ask what surgery is not being made available to public patients as I understand that there are significant restrictions.”

“The trick is that a surgical waiting list starts when you are booked to have surgery (ie have seen a surgeon and signed a consent form and had that sent to theatre bookings with a surgical bookings form). It doesn’t apply to the amount of time you might have to wait from between when your GP refers you to a surgeon and you actually get to see them in their outpatient clinic. GP > Surgical outpatients (wait, not guaranteed) Surgical Outpatients > Theatre (wait, guaranteed with fine print).”

“One of the [Royal Brisbane & Women’s Hospital] surgeons tells me that they are not allowed to put people onto waiting lists if an overload is expected even before that you have to get an OPD appointment You get to wait somewhere in the system.”

We asked Queensland Health Minister Lawrence Springborg’s office if the claims in the ad were misleading, and received a response just before deadline. A spokesperson for the minister pointed to this website, which explains that 531 patients were considered on the “long wait list” for elective surgery in the September quarter of last year. Waiting longer than two years is the “overdue” time for dental treatment, and “you can see we have been completely accurate in our presentation of data, the way numbers have been reduced and the subsequent implementation of the WTG,” the spokesperson said.

We asked about the wait times to see a specialist and were told, “Our commitment is that once surgery is prescribed by a specialist, we will deliver the surgery in the recommended time”.

Can anybody find me some candidates? It’s not just One Nation that is scrabbling to find candidates for Queensland’s snap poll — Katter’s Australian Party is also looking a bit light on. A tipster pointed out that Katter’s website shows just nine endorsed candidates, with two wearing hats like their leader, and not a single woman. Last Queensland election Katter ran 86 candidates, with three getting elected. Will February mean the end of KAP in Queensland’s halls of power?

Beefed up security at News. While Myriam Robin writes today that The Australian was careful about publishing photos of Charlie Hebdo‘s most controversial covers out of fears for the safety of their staff, we hear from a tipster that they are taking the threat very seriously indeed:

“The Herald Sun in Southbank has two armed security guards in the lobby for the first time. They’re old enough to be someone’s grandparents, but at least Hun employees know Rupert cares about them.”

“After a considerable amount of research I am able to advise as follows:

To my knowledge Hornsby Council has not made application to the Attorney General for registration as either an Enforcement or Criminal Agency. I trust this information is useful and assists your understanding of the protection of personal information.  Should you have further questions about this matter you may wish to contact the Attorney General’s Department directly.”

We hope that eases the minds of any other Crikey readers in the Hornsby Council area. If you find out from one of your local agencies if they are using metadata, we’d love to know.

Detention centres/10. We picked on Google earlier this week for putting satire in the news section, but now our attention has been drawn to Google Reviews. While useful when trying to find info on a restaurant or movie, we’re not sure this is how the feature was intended to be used: 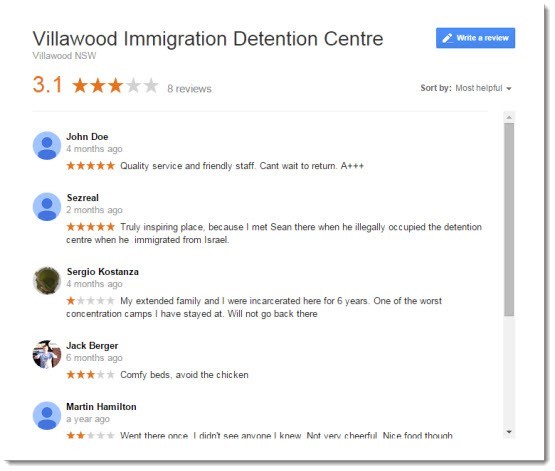 Ha. Rupert cares for them. Lol

I bet Rupert and his family’s personal security doesn’t consist of a couple of old minimum wage retirees. It would be ex special forces all the way for the boss and his brood.