Terrorism has many faces in Pakistan

Extrajudicial punishment is meted out with alarming inconsistency in a state torn apart by terrorism. 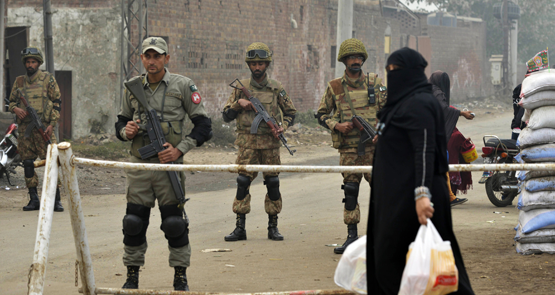 “The British built so many beautiful buildings in this area of Lahore. This one here is the Lahore High Court.” The old gentleman in the tweed jacket gestured nostalgically at the sprawling monument to the the Raj. “They were kind rulers. They looked after people.”

It did not seem like the moment to point out that the British had massacred a crowd of non-violent protestors just a few hours down the road — or rather that it would be a few hours down the road if not for the obstacle of the Indo-Pakistani border. Nor to suggest that the legacy of British divide-and-rule tactics continue to play a toxic role in the ethno-religious politics of the subcontinent. For the moment, the present offers a surfeit of dark thoughts.

“The people who did this atrocity are not Muslim. They are not even human.” My new friend’s nostalgia for British imperialism may be out of step with the times, but his condemnation of the Tehrik-i-Taliban’s (the Pakistani Taliban) massacre at the Peshawar Army Public School echoed national sentiment.

This unequivocal revulsion at the murder of at least 132 schoolchildren and nine teachers stands in contrast to the elaborate conspiracy theories that circulated in the aftermath of the shooting of Malala Yousafzai.

Malala was never shot at all, simply adorned with bandages and fake blood in order to justify US drone attacks on Pakistani territory. Or she was shot, but it was a CIA plot to blacken Pakistan’s name. Or she was shot by the Taliban, but she was a CIA agent so she basically deserved it.

It’s tempting but simplistic to see the contrasting responses to the two attacks as a gender differential. There are other factors at play. The very senselessness of the attack upon Malala lent itself to denialism, regardless of the fact that the Taliban had claimed responsibility. But there was a horrible logic to the massacre at the prestigious Peshawar Army Public School as retaliation for the armed forces’ ongoing Operation Zarb-e-Azb against a hotchpotch of militant organisations in northern Pakistan.

“We selected the army’s school for the attack because the government is targeting our families and females,” said Taliban spokesman Muhammad Umar Khorasani. “We want them to feel the pain.”

And the pain was most certainly felt as the bereaved families buried their offspring, child survivors told of witnessing classmates and teachers murdered before their eyes, and candlelit vigils were held around the nation.

“Terror takes many different forms in Pakistan. Much of it is extrajudicial, much falls between the cracks of the law and much of it is undertaken in the name of the law itself.”

Prime Minister Nawaz Sharif claimed that there would be no more distinction between “good Taliban and bad Taliban” — the notorious strategy under which the Pakistani military aligned itself with the “good” militants who undertook operations in Afghanistan and Kashmir while cracking down on those who operated against Pakistan itself.

He illustrated this new mood by lifting a 2008 moratorium on the death penalty. A wave of prisoners who had been sitting on death row after being convicted under anti-terrorism legislation have been sent to the hangman, their corpses gruesomely pictured in the national media.

Shafqat Hussain had been 14 years old when he allegedly confessed under torture to murder and was sentenced to death by an anti-terrorism court. He was due to by hanged on January 14 until granted a stay of execution this week. But many more are expected to be executed over coming months after the passage of a bill of constitutional amendments that extends the categories of civilians who can be tried by military courts.

I took a straw poll of lawyers around the High Court, where their black legal robes blended seamlessly with the Raj architecture. The mood was one of strong support for the lifting of the moratorium on the death penalty but anger at the passage of the constitutional amendments. “Strong action is required. These executions will help to protect poor people against the terrorists who have been oppressing them.”

But these men had taken part in the Lawyers Movement (otherwise known as the Black Coat Protests) which had led to the eventual overthrow of former military ruler Pervez Musharraf. They had not suffered tear-gassings and baton charges in order to see authority transferred from the judiciary to the military. “These changes are not justice. They are thuggery.”

Last year, the Lahore High Court made international headlines after Farzana Iqbal was stoned to death by her family members outside the court in an unofficial “honour killing” for having married without her family’s consent. Her father, brother, former fiance and cousin were then sentenced to death by the anti-terrorism court in November for their role in her murder.

Initial reports of this case described it as a Romeo and Juliet romance, until it emerged that this particular Romeo had murdered his first wife, but escaped punishment because their son had forgiven him — grounds for a pardon under Pakistani law.

Terror takes many different forms in Pakistan. Much of it is extrajudicial, much falls between the cracks of the law and much of it is undertaken in the name of the law itself. Pakistan’s former Prime Minister Zulfikar Ali Bhutto was convicted and sentenced to death by the Lahore High Court in 1978. We know Farzana’s name and story only because her murder was committed in such a public location.

Most such deaths go unrecorded.

The same is true of those killed in the conflict between the armed forces and the Taliban, not to mention those killed in US drone attacks. We could not light enough candles to commemorate all those who die anonymous deaths in so many different forms.

Rundle: honour killings of women keep the war off the front page

There are two positive things about the Raj. It built stuff that worked and it could, at least sometimes, be shamed into action by its own press. Ghandi would have been executed otherwise. That does not happen much now, because the press is gutless in many countries, muzzled by governments in others and owners in the west. The other reason is that governments in the west are craven and without shame.

The demand to partition the Raj came from Jinna not the British who warned that it wouod be a disaster.
There are more muslims in India than Pakistan and they are free to migrate to the Land of the Pure.
None do.

Pakistan’s duplicity is beginning to bite it on the arse. And they are a nuclear power. However, they continue to skilfully receive billions in “aid” of which the majority is spent on military equipment, and a good portion of that somehow finds itself being used against both the State, and its “allies”.
I would be very careful making allegations based on local sources regarding civilian casualties caused by drone strikes. Not only have many “sources” in the target area(s) been discredited through technical means, but those areas are highly non-permissive to journalists unless they have assured the TTP et al they will “toe the party line” in their reporting.
I am not saying there hasn’t been collateral damage, which is tragic. But using locally sourced information to substantiate your allegations — in that particular part of Pakistan — is highly risky.