Poll Bludger: Coalition’s Qld slump worse than any other state

Voter distinction between federal and state politics is becoming ever-more blurred as the unpopularity of the Abbott government taints state leaders. 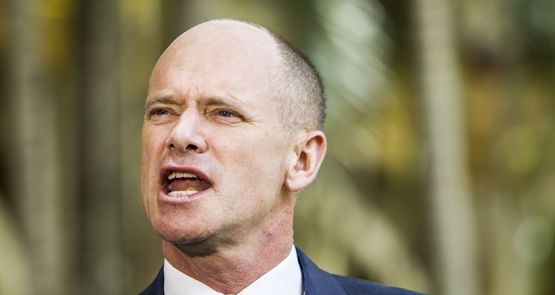 As Queensland Premier Campbell Newman prepares to face the voters at the end of the month, one of the crosses he bears is the biggest loss in support for his federal counterparts out of any state, according to an analysis of opinion polling conducted since the 2013 election.

On a two-party preferred basis, the Coalition vote in Queensland has fallen by 9%, leaving Western Australia as the only state where it maintains parity with Labor.

Such are the end-of-year findings of the BludgerTrack poll aggregate, which combines results from six pollsters including published state breakdowns from three, and unpublished ones from ReachTEL and Essential Research (full results of which can be found on my blog The Poll Bludger).

Particularly alarming for the Coalition is a failure to yield any dividend for the plummeting fortunes of the Palmer United Party. Following the disastrously received May budget, it was widely thought that the government’s position was not as bad as the poll numbers suggested, since the PUP was providing an outlet for temporarily disaffected supporters to let off steam.

But while PUP support in Queensland has fallen from just shy of 11% in June to its present low of 4%, the primary vote for the Coalition is barely higher than it was after the budget, and has ended the year trending downwards.

Although Queensland takes the prize for the biggest drop in Coalition support, the other big states are not far behind.

In New South Wales, which is likewise of interest for the proximity its own state election, the two-party shift has been in the order of 7%, with Labor recording a lead on the primary vote for the first time in five years. But despite that, the state government is presently giving every appearance of bearing up better than its counterpart north of the border.

Perhaps the most interesting tale to be told from state-level analysis of federal polling comes from Western Australia, where the Greens vote has shot up by 5% since the election — exactly double the substantial improvement it has recorded nationally.

The trend chart shown below strongly suggests this to be a legacy of the special Senate election in April, and the controversy which attended Labor candidate (and now Senator) Joe Bullock. 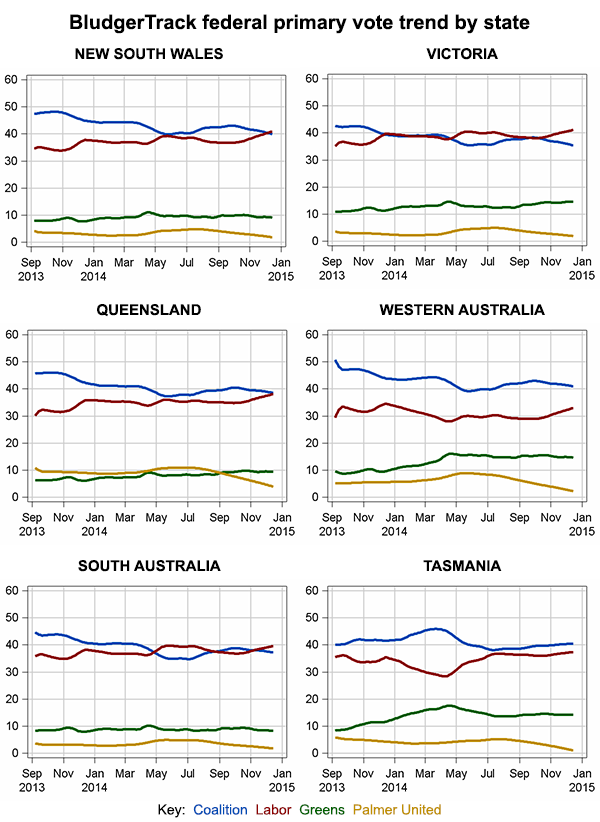 Noted as a social conservative, Bullock’s position at the top of the ticket gifted him the party’s only unloseable seat, leaving its other Senate incumbent, Louise Pratt, to fight it out from second place.

Following the late campaign revelation that Bullock had made derogatory comments about Pratt’s relationship with a transgender partner, Labor recorded a catastrophic 21.5% of the vote at the election, while the Greens broke through to 15.6%.

Far from being a transitory protest vote, polling suggests that a substantial chunk of the Left vote in WA shifted from Labor to the Greens and stayed there — in strong contrast to the surge recorded at the time by PUP, which has proved no more durable than in Queensland.

Here too, the results of federal polling could well have important implications at state level. The most recent poll result of WA state voting intention from Newspoll shows exactly the same pattern as at federal level. The two-party shift has instead been filtered entirely through the Greens, who have soared from 8.4% to 15%.

In purely electoral terms, Labor can console itself with the knowledge that a vote received via Greens preferences is worth as much as any other. But politically speaking, things might not be that straightforward.

Labor’s leader in Western Australia, Mark McGowan, recorded excellent personal ratings in the aforementioned Newspoll, with an approval rating of 48%, disapproval of 27%, and a 40-39 lead over Colin Barnett as preferred premier — an uncommon feat for an opposition leader.

However, that hasn’t stopped rumblings being heard about McGowan’s leadership. A recent column by Joe Spagnolo of Perth’s Sunday Times newspaper reveals that McGowan’s rivals have been putting it about that “the only real statistic to quote is the primary vote”.

This would seem to be true only to the extent that it’s the statistic that’s of use in undermining McGowan, when it may in fact bespeak the impact of federal factors beyond his control.

Elsewhere, South Australia has recorded a relatively mild two-party shift of 5.6% since the election, perhaps surprisingly given the general presumption that federal factors had loomed large in Labor’s remarkable win in the Fisher state byelection last month.

There was a big move in Victoria over the last three months of the year of 3.3%, but this needs to be treated with caution due to the tendency of federal polling to pick up static from state election campaigns.

An illustration of this point is provided by Tasmania, where the Liberals recorded an anomalous surge of support at the time of their landslide state election win last March. While that has mostly washed out of the system since, the swing currently recorded since the federal election is a very mild 3%, perhaps suggesting that Premier Will Hodgman’s honeymoon period has helped cushion the blow for his federal counterparts.

How on earth did this guy become lord mayor??

The poll results from Queensland are entirely unexpected. Labor were thrashed at the last poll and were always going to bounce back to some degree.
The main interest will be whether the people of Ashgrove are smart enough to return Campbell Newman as Premier.

William – I always enjoy your analysis. I’m such a polling geek.

What are the long term trends looking like? Do you have any graphs / analysis that extends over the last 10-20 years? And what are your views about the permanency of these micro parties that make a big splash and then self-combust (usually due to them being personality driven rather than coherent policy driven)? My own view is that there is (and perhaps will always be) a 10% of the population that will become disaffected, latch on to a protest group like PUP, OneNation, Democrats (though that was more self-combustion through betrayal of policies) and then swing back when they are inevitably let down. The Sex Party in Victoria may prove to be different but I’d be interested to see the trend lines (and suspect there might be a cyclical nature – but would love to read your thoughts).

Apparently even if Newman loses his seat, he can stay on as Premier. This was the opinion of a legal expert on radio today. A terrific feature of the QLD constitution. The idea would then be for a cooperative MP to give up their safe seat and let Newman take it in a by election.