Money for nothing as govts spend big on boondoggles

Exactly how much bang for your buck are you getting as a taxpayer? Crikey intern Mahalia Dobson lists five of the most wasteful uses of taxpayers' money. 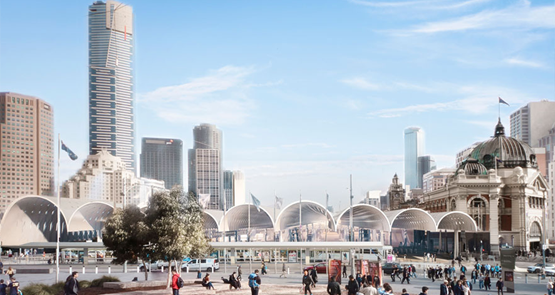 Politicians love nothing more than to pat themselves on the back and we always hear about it when governments invest successfully in a public project. But what of the wasted investments, the boondoggles?

Today, Crikey takes you on a guided tour through the fiscal wastelands of government expenditure and the great white elephants of public infrastructure.

In 2013, Victoria’s Coalition government launched a competition, calling on designers from around the world to submit plans for a redesign of Flinders Street station. The competition received over 100 entries and was ultimately won by Swiss design company HASSELL.

Last year, almost $1 million of Victorian taxpayers’ money was spent refining the Flinders Street “face lift”. State contracts show the Napthine government paid $930,000 to HASSELL to develop a business case for the redesign. This business case would help the government decide whether the redevelopment could be built without reaching too far into taxpayers’ pockets.

Since coming to power late last year, however, Victorian Premier Daniel Andrews has scrapped the multibillion-dollar plans for the central station, facetiously referring to the plan as a “colouring-in competition at taxpayers expense”.

Commissioned by the state Labor government in 2007, the Victorian desalination plant is capable of supplying up to 150 billion litres of drinking water every year. Sounds like a pretty good way to spend Victorians’ money, doesn’t it? There’s only one problem: it currently fails to deliver water. That’s right. Victorian taxpayers have paid more than half a billion dollars to the operators of the state’s desalination plant, despite the fact that, as of June 30, 2014, the plant had failed to produce any water.

In October of last year, the South Australian Liberal Party demanded an apology from the state government for “wasting” money and labour on the Gawler rail line electrification project, one year after the Abbott government withdrew funding.

The auditor-general’s annual report showed a staggering write-down of $46 million in spending on a project that never eventuated. The report also counted $28.6 million of costs “not likely to provide any future benefit”. A further $18 million in design, scoping, project supervision, tendering and mobilisation costs for the Adelaide-to-Salisbury section of the line were deemed obsolete.

The state government now has two options: they could either re-spend that $18 million when the project (maybe) recommences in 2017-2018, or they could just burn the cash in sacrifice to the gods of public infrastructure and hope for the best. Same result for the taxpayers, really.

Coming in as one of the most anti-climatic announcements in recent years is the $680 million ASIO building in Australia’s capital city. More than a year after the headquarters was officially opened, only a few members have moved in, as the building remains mostly empty. ASIO’s staff were due to move into the headquarters in September 2013, but now it appears they may have to wait until half way through this year — making their move close to two years behind schedule.

The ironic twist in this comedy of errors is that, in 2013, Four Corners reported that the building’s blueprints, including plans of its security and communications systems, were stolen in an apparent cyber attack. Did we mention the new building is supposed to house the Australian Cyber Security Centre?

While it’s frustrating when governments spend a lot of money on plans and projects that fall by the wayside, it’s even more frustrating when they spend it on things like, well, a coffee machine.

In August 2014, WA Labor leader Mark McGowan issued a press release alleging Premier Colin Barnett spent $12,000 of taxpayers’ money on a coffee machine. This came after the Barnett government spent $35,000 on a new cabinet table in 2012 and $27,000 was spent on a boardroom table, chairs and a couch for Speaker Michael Sutherland’s office.

One thing is for certain, accountability for billions of dollars in wastage is at zero. Where is the outrage?

Hindsight, they say, is always 20/20. In 2007 Victoria was still in the grip of a drought that would see Melbourne’s water supply fall to only (if memory serves me correctly) 26% of capacity. That’s with a population of around 4 million people.

As it transpired, the drought broke and the need for desalinated water … dare I say it … evaporated, at least until the next drought. What would have happened, though, if the drought had continued? And can the government be blamed for not having a meteorological crystal ball to foresee the change?

Melbourne’s population is predicted to reach 7 million by 2050. How far would the water levels fall then, if we experience a repeat of the same climate conditions that occurred in the first decade of this century? Desalination plants aren’t built overnight, though. They take time and planning and better too soon than too late.

I think only time will tell whether or not this particular project has truly been a waste of money.

the building’s blueprints, including plans of its security and communications systems, were stolen in an apparent cyber attack

So they want to do WHAT with our data?

Hang on… I just saw some schematics flash through the screen on my iVac. Hmm made in Guangzhou – the plot thickens.

Stand down and wait for a genius to claim that if the public let our security agencies have enough resources then this wouldn’t have happened.

I better check my iFridge and eWeatherStation just in case…

An argument I’ve put forward before Graeski – desal plants are, in essence, an insurance policy – in the face of unpredictable rainfall and water availability, the ability to manufacture drinking water is essential.

6. The cost of the G20 for accommodation, tables and chairs
http://www.smh.com.au/federal-politics/political-news/table-at-centre-of-row-over-mounting-expenses-for-g20-talkfest-20141022-11a2ra.html
There needs to be an independent body whose sole aim is to highlight this extravagance during the governments last 3 years (or previous terms) as against the cuts that ordinary workers and pensioners had to cop during the same period; Voters memories are too short, and too influenced by empty promises, at times and the Chaser is never around when needed.

The reason the desal plant has not been used is a conscious policy decision made by the Baillieu/Naphthine government. Obviously the existing dams will not be adequate to cater for the projected population of 8 million, and existing irrigation rights would make dams on the Gippsland rivers difficult politically. Bushfires in the north-east of Victoria were fortunately controlled two years ago, as they had the potential to make water in some of the existing dams unusable. The desal plant would have been required.