Asian Cup: the (financial) reasons to cheer for North Korea this summer

Australia is hosting a sporting bonanza this summer, here's our guide to the weird, wonderful and cheap Asian Cup matches. 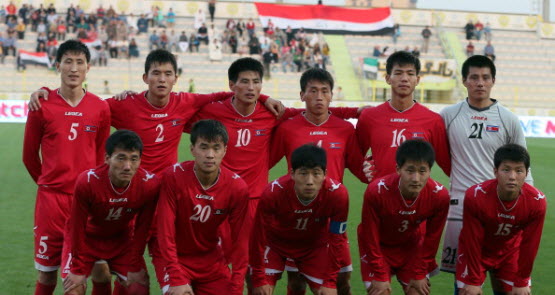 The Asian Cup opens tonight in Melbourne with the Socceroos taking on Kuwait, ranked 124th in the world, in a match that will most likely sell out. It’s the start of what will be a summer unusually rich in international sport offerings, with the Asian Cup being played along the east coast until the end of January, and the cricket World Cup beginning on February 14. Alongside the two one-off competitions, the annual tennis tournaments, as well as the Big Bash T20 competition mean that summer television offers more than endless re-runs of the Big Bang Theory. Even cities like Canberra and Newcastle, which usually miss out on international sport, will experience some time in the spotlight.

But if you plan on taking the family to as much sport as possible this summer, it can get very pricey very quickly — the cheapest adult ticket to see the Socceroos is $49. Of course, matches not featuring the home side are a lot more affordable. So if you want to see a bit of the Asian Cup without breaking the bank or sitting up in the heavens looking at specks of players, here are a few events that might be of interest.

Uzbekistan v North Korea, Sydney, January 10. North Korea hasn’t won a game in two years, and in 2010, after losing a Wold Cup match to Brazil, the country’s football authority claimed the coach was taking instructions on invisible mobile phones directly from Kim Jong Il. It still didn’t help though. Tickets to sit in the North Korea “active supporter zone” go as cheap as $15.29 (and just $5 for the kids), which seems almost like charity, as we doubt there will be many actual North Koreans in attendance. Uzbekistan on the other hand, is rated fourth in the competition, and will hopefully show a lot more skill than their rivals.

Japan v Palestine, Newcastle January 12. Japan won the last Asian Cup, and are also fancied to make it to the later stages of the competition this year. Palestine, meanwhile, struggles to field a team from within its (disputed) borders, with some players coming from as far as Chile and Sweden. This is Palestine’s first appearance at the Asian Cup, and they are unlikely to last past the group stages with odds at $301.

Iran v United Arab Emirates, Brisbane, January 19. Iran is one of the top-ranked countries going into the Asian Cup, and they play the fifth ranked UAE next weekend, for which the most expensive tickets are still less than the cheapest tickets to see Australia and the level of competition should be high.

The full fixture is here — let us know if you find any other gems.

As the soccer winds down, the cricket starts up, with 49 matches across 44 days, there’s no North Korea, but there is Ireland, Afghanistan, as well as the best cricketers in the world.

Re The Asian Cup Finals

his competition and soccer in Australia is generally pathetic

After about 30 years with endless promotion by a TV network. The SBS in defiance of its charter has done little other than promote soccer with its obsequious commentators and fawning experts revelling in their inferiority complex and the result. Australia has reached 100th in the world ranking.

Now in peak viewing time the ABC for reasons best known to itself is going to use resources that could have been used to maintain coverage of women’s basket ball for example , to broadcast a game between the 100th ranked nation and the 124th.

WOW what a sporting extravaganza!!!.. I sincerely hope attendances are so poor that the competition is a complete flop..

$40 M wasted on a World Cup bid. Soccer in Australia is a total waste